Review: Now That You're Here by Amy K. Nichols

First, thanks to Knopf Books for Young Readers and Edelweiss for allowing me to read an e-galley of this book.  I have to say that it wasn't a bad read.  I wasn't blown away by it, but it was a quick read because it did keep me wanting to know what would happen next. 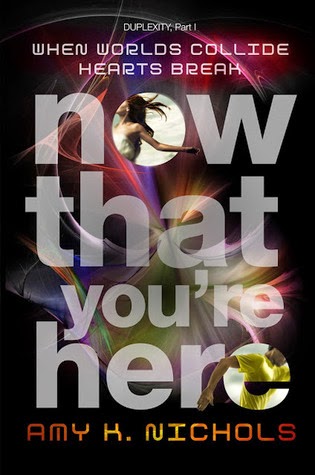 There are two main characters, Danny and Eevee.  Yes, that's how her name is spelled, although once in awhile they will spell it as Eve, and I'm not sure if it was really pointed out why, or if it made a difference when it was. That was one thing that bugged me.  But anyway, the chapters were alternated between the two characters' points of view.  The story starts with Danny.  Danny and his friend Germ are taggers, they like to spray paint and do graffiti, and currently they've got someone who is paying them to paint specific pictures or symbols, at certain locations.  In Danny's world there are cameras everywhere, watching everyone's every move.  And so they have to be careful about it so they don't get caught.  But Danny and Germ have determined that it is probably a certain rebel group that is behind them getting paid, so they've decided this will be the last time they do it.  Only there is an explosion this time, and somehow Danny lands in a strange world.  This world is where Eevee lives.  At first when Danny sees her, he thinks he knows her. But in Eevee's world, Danny is not someone she'd ever hang out. Eevee is a major science geek.  With her friend Warren, they do a lot of science projects with a teacher they call Mac.  It is this science stuff that may help Danny to get home, but may also cause problems for Eevee and Warren as they start noticing a van that seems to be following them, and their teacher starts being absent from school a lot.  Danny's life in Eevee's world isn't great.  Eevee's home life is okay, she has both parents, although they do have a strange living arrangement.

There is a lot of good science ideas in this.  The ending leaves you  hanging, so it's good to know that there is going to be a sequel next year.  While this wasn't the best book on this topic, I did find it pretty interesting and entertaining.  Talk about parallel universes and EMPs and other current popular science topics made it a very perfect read for anyone interested in those types of issues these days.
Posted by Lisa Mandina at 8:00 AM