Review: The Murder of Adam and Eve by William Dietrich 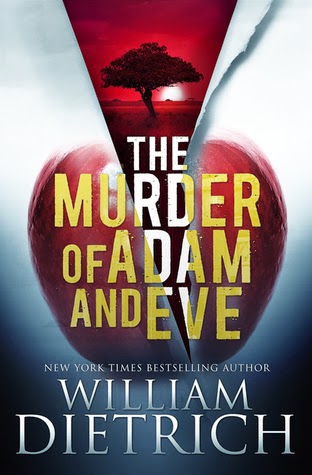 First, thanks to Burrows Publishing and Netgalley for allowing me to read an e-galley of this.  It was okay.  As I look back at it, it probably was a little better than I thought.  The idea is an interesting one, I just got a little bored at parts.

The main character is a 16 year old boy named Nick.  Thanks to his new substitute history teacher, he has tried to do some research on an old military fort out on a nearby island.  But once he gets out there, something strange happens when he goes into what looked to be a blocked tunnel. All of a sudden he blacks out. When he wakes up, everything seems different.  There are no noises of other people, boats, airplanes, etc.  But he runs into a girl named Ellie, who tells him that she's been recruited by some aliens named the Xu in order to try to convince them that humans are worth saving.  They talk about how humans have destroyed the planet and are violent and don't deserve to continue.  In order to prove that humans are worth saving, Ellie and Nick are sent back to prehistoric time to where the scientific "Adam" and "Eve" are.  And they must save them before the Xu get there and kill them.

At first they are just out in the wilderness, and they must survive among the lions and other animals, like snakes, and even hyenas.  They must figure out how to get food.  And after doing that, then they must find this Adam and Eve.  And once they've done that, they must figure out what they can do to prove they deserve to live.  But Ellie and Nick have a lot of different ideas about how to do this.  Ellie wants to hide the ancestors, while eventually Nick feels they will have to stand up and fight.  And when it seems things may be right the way they should be, both Nick and Ellie will have to beware of the other possibly betraying what they want.  In the end, decisions will be made, and the Xu will move on leaving humans to continue to prove their worth.  Nick will learn what kind of a person he is, and what he needs to do in order to help the human race.

The descriptions of the animals and the landscapes was beautiful and very vivid.  But at times this is where I got bogged down in the story, and I got to where I was skimming along to get to the point where they would find the Adam and Eve. And once there, I definitely got interested in how things would turn out.  How would they save Adam and Eve?  And with the time travel, I just wondered how in the world would they be able to get away with everything they did and showed those people without totally messing up the future that Nick and Ellie came from.  At the very end of the book I liked how the author had a bit of information about the real science and history of the time period talked about, as well as the Earth's history.  It was refreshing to see all of it put out there, and the author to point out what things he'd taken liberty with for the sake of the story.

So, a good read, definitely a journey story, not a road trip though, no roads back then.  But so much was beautiful reminders of nature and a much simpler time.  Even while reminding us how good things really are today, even with all the bad stuff.  I also liked that while the aliens did talk about the bad things humans had done to the planet, I didn't feel a lot of preaching like there often is on that subject.  All in all, I would recommend it for people who enjoy a bit of time travel along with true-ish history and through provoking ideas.
Posted by Lisa Mandina at 7:30 PM