Review: The Ghosts of Heaven by Marcus Sedgwick (COYER Challenge #2) 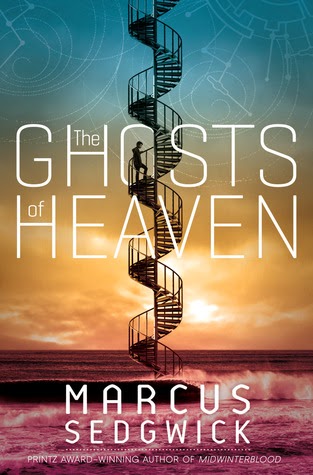 First, thanks to Roaring Book Press and Edelweiss for allowing me to read an e-galley of this title.  I of course loved the cover right off, and the idea of the story sounded really intriguing.  I don't know that I was a huge fan of the story though.  It was very creative, and unique, and well-written for sure.  And I made it through the book, and for the most part wasn't bored at any part.  At the beginning of the book, the author makes a note about how it is divided into four different parts, and that the reader can read them in any way they want.  Personally, I'm not sure how true this is.  I feel like they were arranged chronologically and it works that way.  In fact, I think if you read them in a different order, there are small bits in each story that tie back to the story before it, that might not stick out as much to the reader if they didn't read them in order.  But that's my opinion, and how my brain works, so maybe for others it would be okay.  All of them deal with a spiral in some way, the cover is a perfect tie in for that.

The first story is told in poetry form.  It is the story of a girl in the time of cavemen, and references the paintings found in caves that date back to those times.  I skimmed through this rather quickly, as I am not always a big fan of the poetry, and it is a lot of times quicker to read as well.  I get the spiral bit in it, kind of, but not as much as it was set into the other stories.

The second story is a woman in the times of witch hunting.  She and her mother created herbs and "potions" to help those who were sick or in pain.  At the time of the story a new priest has come to town, one who is setting about proving there is a witch to be taken care of.  And in this time period, there are those who would give her up, even though she's helped them, because of their own problems.  Again, a spiral plays into the story, and the wonder of what it might mean.

The third story takes place in a time where asylums were a big thing.  And the story follows a single father who is a psychologist come to work at an asylum in a very remote area.  He and his daughter live on one of the top floors of the building, and the floors below are the different patients, the lower the floor, the worse off their problems are.  The first day there they meet a man who seems like he must work there, but it turns out he is a patient.  And one that lives on the lower floor, because his psychosis has to do with spirals.  I feel like this story brings in the "ghosts" bit from the title.

The final story is set in the future, a world where humans must move on, find a new planet to live on.  It is a space ship that carries 500 people to start a new life for humans on the "New Earth" that has been found.  Besides the 500 people that are in a sleep until they reach the planet, there are 10 sentinels.  These are people who are under a different kind of sleep, one that wakes them up every 10 years in order to see what has happened in the time they were asleep, and make sure things are still working.  The main character is one of these sentinels.  And he begins to wonder if he is really the only one awake during the 12 hours he gets to do his work every 10 years.  Especially when he wakes up to six people being dead.  And according to the computers on board, there is no reason for their deaths, no malfunctioning of anything.  Again there is a spiral tie in because of the ship having to spin to create the fake gravity needed to help with the long journeys in space and human health.  This story has the most tie ins to the other stories, especially at the end of it.  I kind of feel like it would be the best at the end, or if you were going to try a different order, maybe it could be the first one.

Definitely a very complex story overall, and a good one, just not something I would read over again.  I can definitely recommend it to people who enjoy a complex group of stories, and looking for the connections in them.  It is definitely very thought provoking, with numbers and science, nature and history.
Posted by Lisa Mandina at 4:38 PM