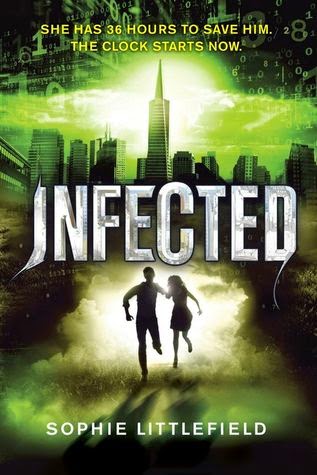 First, thanks to Edelweiss and Delacorte Books for Young Readers for allowing me to read an e-galley of this.  It was a good read, I was just disappointed that it wasn't another zombie book.  I first found this author, Sophie Littlefield with an ARC of her book, Aftertime, which was a zombie story.  And when I saw the title of this, my first thought was, oooh, YA zombie story, I mean isn't that what the word infected brings to mind for you these days?  No?  Just me?  Oh well.  Overall it was still a good story, even it it wasn't what I'd expected.  That's what I get for not reading the synopsis.  I just saw the title and the author's name and requested.

The main character in this book is Carina.  Her mother passed away, suicide, about a year ago. She'd been living with her uncle until just before the book starts, when he is in a car accident on his way home from a business trip.  As the story starts Carina is getting ready to go to his memorial service.  But some strange things are going on.  As far as she knew her mom and uncle had been working on some kind of nutrition scientific research.  But at the memorial service there is security, two bodyguards following her around. She's getting ready to go live with her mom and uncle's friend Sheila.  But first she finds a code of some sort in a ring that her mother had given her. And when she tries to get some alone time with her boyfriend Tanner, Sheila and the bodyguards start getting really weird about not letting them hang out.  So she and Tanner decide to get out of there and sneak away.  Carina has an envelope that she found under the trash can at her uncle's house, and in it, he says to not trust Sheila and gives a location for her to go to in order to be safe and find out what is going on.

Both Carina and Tanner enjoy code breaking, or other computer programming type of things.  And together they are able to find this apartment along with the code to get into it and then figure out how to get into the encrypted files her uncle left her.  There is a virus that was being developed to help make stronger, faster soldiers.  Only it caused them to die from the side effects.  They had finally come up with an antidote, but before they could attach it to the virus, they began to have trouble, someone had sold the info to Albanians. So not only are Carina and Tanner running from Sheila, but also these Albanians.  And somehow they've both been infected.  Well, first Carina, and then the night before the memorial, when they spent the night on the roof of the school, Tanner got the virus from Carina.

I liked the science, and the intrigue, and even the code breaking.  For the most part it didn't get too technical at any part in my opinion.  And there were twists and turns throughout the whole book.  Some I didn't see coming.  And the dangerous moments were all really edge of your seat, and also unique.  There were drones used at one point, and I loved how they were worked into the story.  Once again Sophie Littlefield has written a great story.  I was lucky enough to get to meet her this past summer at BEA, and here is my picture with her: 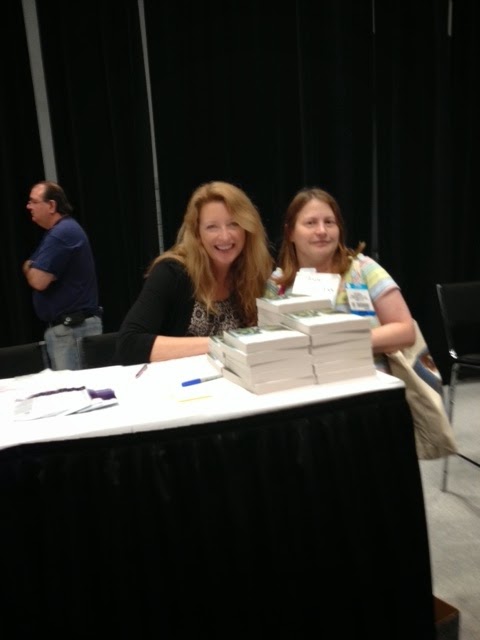