Review: Ignite Me (Shatter Me #3) by Tahereh Mafi 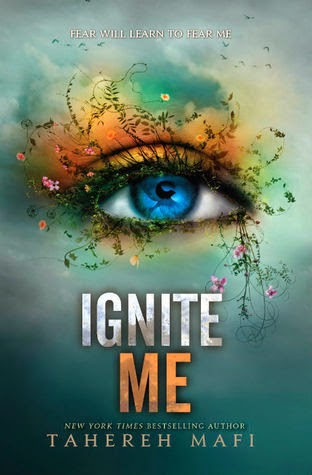 This is one I had checked out of the library to try to read back in September for my sequels challenge, but I didn't get to it.  I finally picked it up this past weekend and burned right through it between all my other things going on, like NaNoWriMo.  Overall this was a great ending to the series, although I feel the actual end of the book left me a little bit confused.  It was kind of rushed I felt, and I had some questions that didn't get explained. But believe me, if the author wants to come back and do some more books in this world to help explain, well I'll be all over that!

Just like in book 2, there were definitely some steamy scenes.  Warner is still my choice for Juliette, and she is beginning to realize that in the book. She also realizes that Adam really isn't the one for her the more she changes from the things that she goes through.  Adam has a really hard time realizing it though.  And he is so cruel to her.  So cruel in fact that as I was reading one scene while I was on my lunch break at work, I had to struggle to keep from having tears streaming down my face.  When I got home later though, even before I picked up the book to read again, I let myself shed a few tears for how sad that part had been.

In this book the Omega Point base was destroyed.  Juliette has woken up after being shot point blank by Warner's, and now we know Adam's father.  She was saved through the healing twins, with the help of Warner who is able to mirror others' powers and he is still the only one who can touch Juliette.  He assures her that the base was destroyed and so he tells her that probably all of her friends are dead.  But she refuses to believe it and convinces Warner to take her back to the site of the destruction.  She runs into Kenji, and soon learns that some did survive.  Not many, but yes, one of them was Adam.  Who is at first so happy to see her.  But she has to remind him that they did break up before this all happened, and she still feels the same way.  And when Warner shows up to pick her up, Adam now sees that she is in love with Warner, even if she doesn't know it herself.  He can tell because she looks at Warner the same way she used to look at him.

All Adam wants now is to keep his brother and his friends safe.  Whereas Juliette is now all about taking down Anderson.  And so again, they fight.  She is able to rally the others, bringing some of them out of their catatonic seeming states.  And Kenji is totally on board.   Warner also wants to bring his dad down, and we learn that many things he's done in the past weren't for the reasons everyone, including Juliette, assumed.  Juliette learns that Warner is a much different person than he shows to the outside world.  And she realizes that she does love him, although not as soon as he hopes.  And there are parts where he has to put distance between them because he's never had anyone who could hurt him as much as she does, because of the feelings he has for her.

They all come up with a plan to rebel, or Juliette comes up with one, and everyone thinks it is a good one.  Juliette realizes that she might be a leader, more than she ever realized.  They must convince Warner's men, as well as hopefully the citizens in the area, to join them if they hope to have any chance at winning.  They will need to learn to work together, Juliette must learn to control her powers, and at some point, Adam must tell Warner that they are brothers.  All of this leads to a very emotional, edge of your seat ride.

As I said at the beginning, I loved this book.  Could barely put it down, even when it was making me cry!  There were again very steamy scenes between Juliette, and only Warner this time, none with Adam like in the last book.  But that's a good thing.  The ending.  Hmm, how to describe my disappointment without spoiling anything.  Let's just say that in the final battle, Anderson has a secret weapon.  But we know nothing about this weapon, other than that he looks familiar to Juliette and is blond.  And then we don't quite know where Warner is at the end throughout the battle.  We mainly know about Kenji and Juliette, and they are actually the main part of the story.  But it just feels so rushed and there are too many things unanswered for me because of this.

I loved Kenji all throughout the story, and am now totally on the same page with those people who picked him as someone they'd love to see get their own book.  Maybe that is how the author could add on to the story so we can stay in the world and I can get some of my questions about this ending answered.
Posted by Lisa Mandina at 12:00 PM