Review: Girl on a Wire by Gwenda Bond 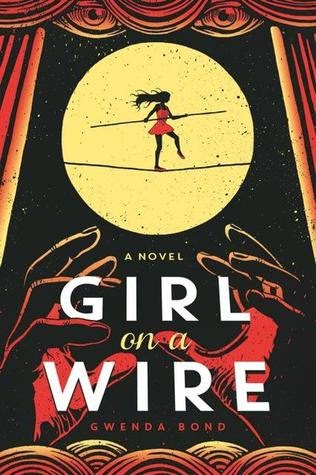 First, thanks to Amazon Children's Publishing and Netgalley for allowing me to read an e-galley of this title.  The book actually was published at the beginning of October, but I did get an e-galley of it right after that I believe.  I was very interested in it for several reasons. First, I really enjoyed the other book that I had read by this author, Blackwood.  Second, there was a time when I was younger that I really wanted to be trapeze artist, so a story about a girl who was a high wire walker in a circus was definitely interesting sounding.  And of course, with American Horror Story being set in a kind of circus/freak show this season, it has really been something that is on my mind lately.  And can I say, that I enjoyed this book a lot!!  It was a really great story I thought.

The main character is Jules.  She is 16 years old and her family has always been a part of a circus, but kind of in a small setting on their own.  She and her father are wire walkers, while her mother does tricks with horses.  The reason they have worked on smaller shows is because of an old feud between their family and the Flying Garcias.  This feud dates back to the time when Jules' grandmother, who she calls Nan, was a circus performer in the same show as the Garcias.  There is a new "big" show called the Cirque American that has asked her family to join.  But because the Garcias are a big part of the show, her father tells the man in charge, Thurston, no.  Jules decides that's ridiculous, and she wants to be a part of something bigger than the show that they will probably not be able to keep going much longer.  And so she sets up an ultimatum by running away and demanding her father make a deal and take their family to the circus.

When they get there, they get a cold reception from all the other performers.  You see, Jules' grandmother was blamed for several accidents that happened back then, to the point where she was chased out of the show.  Upon arriving, Jules goes exploring, and wanders into a tent where she sees a cute boy practicing on the trapeze.  And then she realizes that this boy is one of the Garcias, so she leaves quickly.  At the big welcome party the owner throws from them, this boy is the first to ask Jules to dance.  And she finds that he may not be as bad as the rest.  That he may be willing to give her and her family a chance.  His sister also seems to be intrigued by Jules' cousin Sam.  But it is their brother Novio that picks a fight with Sam that first night.  And when they get home after the fight, it seems their trailer has been ransacked.  Soon other things keep happening, symbols of bad luck appear as Jules is doing her act, almost causing accidents.  Remy, the first Garcia she met, has found a board, what would be called a murder board on a detective show.  And on it there are pictures of the items that seem to be showing up causing the bad luck.  And there are lots of clues.

I won't say who, but one character that you will love will have a disaster happen during one of their acts because of these bad luck tokens.  And now Jules and Remy really must figure out who is behind this before anyone else gets hurt.  But they must also figure out if there can truly be feelings between them when they come from families with such bad blood between them.  They are basically a Romeo and Juliet story, down to their names even.

I loved this story. I feel like the love wasn't insta-love, but there was the instant attraction, and that's okay.  I think the relationships between the people in the story were portrayed pretty realistically.  I love all the stuff about the circus that was in the story.  And the disaster I mentioned?  Well, if I hadn't been at work on break when I read that part, I would have been in tears.  Instead I had to hold them in and go back to work, still wondering who was behind the sabotage, and how in the world Remy and Jules would solve the mystery.  Not to mention, what magic might her grandmother have.  And was it really all Nan's fault what happened in the past, with Remy's grandfather.

Another great story from Gwenda Bond.  Now I must get ahold of The Woken Gods soon, because I'm sure I'll love it as well.  Also she has another book coming out next year that will be one of my WOW posts coming up in the next few weeks.
Posted by Lisa Mandina at 8:00 AM