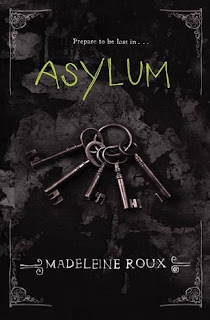 First thanks to HarperCollins and Edelweiss for allowing me to read an e-galley of this.  I've read another book by this author, Allison Hewitt is Trapped, and I enjoyed the zombie story.  So when I saw the info about this on Edelweiss, and heard it was going to be like Miss Peregrine's Home for Peculiar Children, I immediately requested a download of it.  And it was a pretty good, twisty plot story.  It comes out at a good time, after the recent hit TV show American Horror Story had its 2nd season take place in an insane asylum.  My only disappointment is that not all the photos for the story were part of the e-galley.  Although I definitely understand why that was probably the case.
The main character is Dan Crawford.  Dan is attending a summer institute called New Hampshire College Prep.  It just so happens that the dormitory the high school students are staying in is called Brookline, and was once an insane asylum.  One that has some really bad history, and the town really would like to see it destroyed.  Dan doesn't seem to have a lot of friends from what he sounds like at the beginning.  And his roommate Felix is a bit odd he feels.  But at the mixer the first night he meets a girl named Abby.  And she introduces him to the friend she made on the bus trip there, Jordan.  Now, when Dan first got to his room, there was a picture in the drawer where he put his belongings.  It was what looked like a doctor maybe, with his eyes scratched out.  And his roommate said he'd seen some cool stuff down in an office that was from the old asylum.  So when Dan tells Abby about this, she immediately thinks it sounds like a fun trip.  It takes a bit of convincing, but they get Jordan to go as well.  Once down there they find more pictures, and old files, and weird things start to happen.  Abby finds a picture that just speaks to her for some reason.  Dan begins having dreams where he seems to be seeing things from the warden's view point in the past.  And that's not all.  When they get caught for being down there by one of the Hall Advisers, a day or so later, he is found dead.  And not just dead, but kind of posed, the way a serial killer that had once been at the asylum used to do to his victims.  And when Dan tries to ask townspeople more about the asylum, he runs into some issues.  One is when he tells them his name.  See Daniel Crawford was the name of the last warden, the one who was doing so many horrible things to the patients.  What is really bothering Daniel is why he has the same name, why such a huge coincidence?  And as he is adopted, there is no telling if there was some relationship between him and this guy.
In the end, it is definitely left a bit open, because I would like to know exactly what his relationship is, and while they thought they'd solved the mystery, something happens at the end that leads you to think otherwise.  A good creepy story, and I can't wait to actually see the book in print with all the pictures, and then I'll be eagerly awaiting a sequel, I hope!
Posted by Lisa Mandina at 2:59 PM