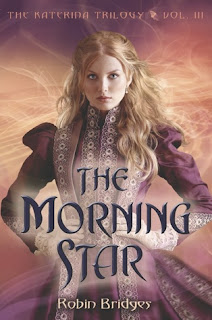 First I have to say thanks to Random House and Delacorte Press for allowing me to get an e-galley of this to review from Edelweiss.  I loved the first book in this series, The Gathering Storm,  that I got as an e-galley from Netgalley.  And then I never saw a chance to get the 2nd book, The Unfailing Light, so I just got behind on the series.  Then back in the spring I saw book 3, The Morning Star, available on Edelweiss, and so I had to request it.  And then in order to be ready to read it, I checked the 2nd book out from the library to read.  You'll see in my review of the 2nd one, that it wasn't hard to catch back up to remember what had happened.  It definitely reminded you without having to have a little summary at the beginning.  But I was very excited to be able to read on to the 3rd book right away.
In the 3rd and final book, Katerina, or Katiya as she is called by her family and friends, is working with Dr. Bamaev, as she is still not really being allowed to go to medical school because she is female.  Prince Danilo is in prison after what happened at the end of book 2.  Her mother had become the striga at the end of book 2, and Katiya found out that she did know of the fact that her daughter was a necromancer, and all about the Dark and Light Court supernatural things that she had seemed so oblivious to before.  There is a new ballerina who seems to bewitch all who come to watch, including the tsarevitch, who Katiya's friend Alix is in love with.  Fortunately she does not seem to be able to catch Katiya's love George's fancy.  And George has finally told his father that he wishes to marry Katiya.  When she goes to talk to his father, he tells her he would approve, IF she will give up her dream of going to medical school.  It is not proper for a woman, especially a royal wife to do that.  Katiya doesn't want to give up her dream, especially when she sees that George is still sick from the battle with Danilo in the last book.  And so, she decides to turn down her chance to marry George, in order to save his life.  George won't have that though, and when it gets so dangerous that they require her to leave and go to a safe place with the tsar, he takes her on a side trip so that they can get married, and then George promises he will let her study whatever she wants.  But while they are at the church, and George is saying his confession to the reverend, Katiya is kidnapped.  Turns out Danilo is no longer in prison, but he is also no longer Danilo, he has been possessed by Konstantin.  And they are after the Morning Star, which is the sword that Lucifer used when he tried to defeat God.  As it is a sword made in heaven, it will be impossible to destroy, and also comes with an army of Grigori, the fallen angels who now serve the sword. Konstantin knows he can defeat the tsar becoming the bogatyr as he did in the first book if he has the sword.  And they must go to Egypt to find it.  Along the way they discover other groups are also looking for it.  Danilo/Konstatin says that he will be marrying Katiya on the trip, but he needs her to be "innocent" for the ritual.  He tells her that she will be ruined now, everyone will know that she has been alone with him, even if they do have the bewitching ballerina as her chaperone.  There will be a war, no matter what happens.  Katiya knows she must get the Morning Star away from Konstantin in order to help the true tsar keep his throne.  And in the end, you know it must turn out the way you would think, but I won't give away just how.
Again, I loved this story.  And there was Egyptian mythology used in this story as well, which is really cool.  I like how not all the "bad" stuff was tied up with the final battle.  And how the story went on for a bit to solve this afterwards.  But not in a boring way, in a way that I always seem to want to know what happens next.  The final part of the book tells of the actual "true" history of these people, and shows just how well this author told and added to the story with her plot.  A great series, one I will continue to recommend!
Posted by Lisa Mandina at 10:23 AM