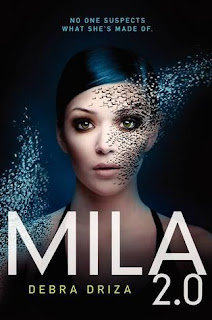 I was lucky enough to get a copy of this book at the RT Convention this past May, and at the same time I got to meet the author!  So I'll share that picture at the end of the review.  I really enjoyed this book.  I like how at the beginning, this perfect friendly girl that Mila had become friends with as soon as she moved there, turned out to not be such a perfectly nice girl, well, at least at being friendly no matter what.  To me, that is unfortunately more realistic sometimes.  I read one review that talked about how Mila and her love interest, Hunter, were unbelievable in how they were still so happy to be together after she'd disappeared.  Now someone can correct me if I'm wrong, but it doesn't sound like she was actually gone that long.  It seemed that the tests at the end took only days, and she and her mom were away only for a short time before that it seemed.  I also felt that the way Hunter behaved was not the instant love that so irritates me at other times.  I felt like it was pretty realistic, other than maybe how quickly he understood when what Mila had under her arm was discovered.
So of course the main character is Mila.  And she has just moved to this small town after her father died in a fire, that she was also injured in, or else just has suffered some kind of post traumatic stress from seeing her father die.  She is not happy with her mother who seems to want to keep her sheltered and not let her go out and be a normal teenager.  But she loves that her mother is a vet and lives on a ranch to help take care of their horses, and that she can ride the horses when she wants.  She's been befriended by Kaylee, and her friend Ella, and is barely accepted by their friend Parker, who is very snooty, and tells Mila that it won't be long before Kaylee moves on to someone else and stops talking to her.  And when there is a cute new guy that shows up, Hunter, she seems to get very interested in him, and quite jealous of any attention he might pay to Mila.  Mila does think he is cute, but doesn't want to upset Kaylee.  But Kaylee is jealous over the smallest things, like if Hunter picks up a pen and hands it to Mila, Kaylee thinks Mila is flirting with him.  She gets really irritated with Mila, and they kind of make up, until a day that they're out driving and Hunter is walking along the road.  When they stop to pick him up with Kaylee's truck, instead of just having Mila scoot into the middle, Kaylee makes her sit in the back of the truck so that Hunter can sit in the cab with her.  Kaylee gets to driving really crazy, and when she swerves quickly, Kaylee goes flying out of the back of the truck.  She is fine, but her arm has been hurt.  And when they look at where she's been hurt, there is no blood, only metal and circuits and a clear fluid.  Hunter quickly gives her something to wrap it up with so that they can take her home.  But you can tell Kaylee is freaked out by her arm, and ticked off at how Hunter is being so nice to Mila.  When Mila gets home, her mother breaks down and finally tells her what is going on.  Or actually has her listen to a recording telling her what she is.  And I say what, because she is a machine that has been given human feelings and characteristics, created by the military.  But her mom explains that she knew she was more than that, that Mila was actually changing and becoming more human, and that is why she took her from the lab.  But now they must leave because there are going to be people coming to get them.  They take off, but of course do get caught.  And they're taken back to the lab where Mila must complete tests to prove that she deserves to be given another chance and not just taken apart and used for spare parts, and she also must cooperate in order to save her mother.
I really enjoyed the book, and the characters were pretty realistic in my opinion.  I look forward to seeing where this might go next.  I will also say that I downloaded the free "prequel" which was like 5 pages?  Maybe longer.  But it really wasn't enough for me to rate it or anything.  It's just Mila's memories of the fire that her father died in.
Okay, now below I'll share the picture of me with the author, Debra Driza, as well as the picture of the autograph I got when I met her.