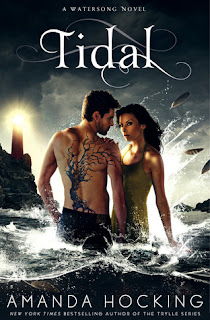 Another book I checked out from the library, although it was kind of a fiasco getting it actually in my hands!  I got an email saying it had arrived.  I went to the library the next day, and it wasn't there.  So, the librarian said one of two things happened, either someone else saw it and took it without checking it out, or else, when they send the books from one library to another, sometimes they might hit the wrong button that says it is already there when they have actually just shipped it from one to the other.  So, I waited a week, then went back in, and it still wasn't there.  I was sooooo disappointed.  But they suggested I call the next time, and I did the next day, and it was there!  Perfect timing because I was ready to read it this week!  First I must say I love the cover, and since I had the book while I was reading the second book, Lullaby, I had a bit of a clue about the third, but it wasn't exactly what I'd thought it was.  And I have to say that this series is just getting better and better as it goes, so I'm really pumped up for the last book, Elegy, which I'll be reading next!  And, as I said with the last review, there have to be spoilers in order for me to tell what is happening, so don't read on!  I won't spoil the story, but there will be things that might spoil the book before.

At the end of Lullaby, Gemma had convinced Penn and the others to stay there, on Capri, her home for awhile.  And sadly, Gemma felt she had to protect Alex, so she sang him out of love with her.  Only that may not have worked quite as she planned it.  Gemma is trying really hard to find a way to break the curse, one way may be finding the scroll with the curse written on it and figuring out how to destroy it.  Harper's friend Marcy has a friend who is really into the supernatural stuff, and may be able to help them.  While they're there, Thea has joined a play with Gemma, and she seems to really enjoy it.  Penn and Lexi are just as horrible as ever, although Penn seems to be a bit intrigued by Harper's boyfriend Daniel.  And hey, knowing that is him on the cover of the book, who can blame her!  Part of the reason they decided to stay is that it seems strange that Alex was able to fall in love with Gemma even though she is a Siren, because that doesn't seem to be able to happen thanks to the curse.  Plus, why is Daniel able to kind of ignore the siren songs?  Penn wants to know what is going on, so that helps to convince her to stay.  Now, at the same time, Penn has decided to look for a new girl to replace Gemma, and she finds one, a girl named Liv, who seems to be perfect, as she is the exact opposite of Gemma, she wants approval and agrees with anything Penn and Liv wants.  But Thea wants them to wait.  She kind of likes Gemma, and wants to give her a chance to stay around, and maybe become part of the sirens for good.  Everyone convinces Harper to go away to college, that she'll only be 50 miles away, which is not far, and an hour's drive if they need her to come home.  Gemma has given in and told Daniel everything, if he promises to keep things from Harper that might keep her from going to college.  Gemma doesn't want everyone else's lives to be messed up in case she must leave to stay with the sirens, or if she ends up dying.  But Daniel soon has secrets of his own, dealing with Penn.  And Alex is having a lot of problems thanks to Gemma's song.  And we also get some glimpses into the sirens' past.  Particularly Penn and Thea, and a man named Bastion, who Penn once loved.  These background flashes are so good, they make the story that much deeper.  Almost make me wish the author would go and write a prequel series, following all the sirens before this started.  Hint, hint.
Like I said, the series just keeps getting better.  Once I picked this book up, it was so hard to put it down to do anything else.  And I'm sure the next one will be the same way.  I loved the Trylle trilogy by this author, it is what got me reading her, and now, I think I'm hooked.  I hope I can get ahold of more of her series.
Posted by Lisa Mandina at 10:26 AM