The Coffin Quilt: The Feud between the Hatfields and the McCoys by Ann Rinaldi 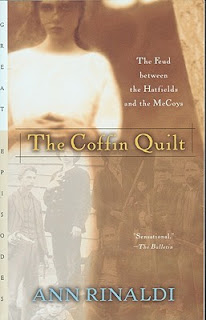 I'd heard of the Hatfields' and McCoys' feud.  As the author states in the note at the end, the names are a pop culture/historical reference, but many people don't know the actual story.  Which was mostly true for me.  At least it was until last summer when the History Channel did their mini-series on the story.  And as usually happens to me with such a tv show or movie, I was immediately fascinated, and began wanting to know more about it.  Now, maybe it was just the way I watched it and who I sympathized or understood more, but the tv show made me more "for" the Hatfields.  In the show they seemed to be the more sane, mostly, and the ones that seemed to have things done to them for no reason.  Well, not always, they did have in the show some of their own family members that I felt caused a lot of the problems, but those people were shown as kind of crazy.  And I always just thought they should have done something about one certain person in their family and things might have stopped.  As I watched it, I just kept thinking, now someone will see that there has been too much death and will stop, but they never did, at least not throughout the whole time period of this feud.
The Coffin Quilt is told from a young girl in the McCoy family.  According to the author's note at the end, all the family members are truly the real ones, but how they acted towards each other within the family is not true, just her thoughts on what might have been.  So it was hard for me to read from this side of the story, when I'd kind of already "aligned" myself with the Hatfields from the mini-series.  But, this was still a very enlightening side of the story, and it made me re-think things I'd seen in the show.  Of course most of it is based on observer's accounts, or maybe diaries or letters from the people in the feud. Without any first hand tales, it is hard to know just what took place, or why people did the things they did.  Our main character that we follow is Fanny, and her mother is just as religious as shown in the show, although in the book you see even more how it may have affected the feud.  The book goes back to the pigs being stolen that some people feel may have been the start of the feud.  Then goes into what has always seemed to be more of the "big"reason, when Fanny's sister Roseanna runs off with Johnse Hatfield.
I enjoyed following the feud through the eyes of a younger family member.  One who kind of had thoughts that sounded just like what I was saying as watching the mini-series.  Now they'll realize it is too much death.  If I do this, then people will finally understand.  Now that there is going to be a baby the families will come together.  All things which didn't come true.  You could feel Fanny's yearning to get past all of this hatred and live a real life.  And you hurt with her, and felt the hopelessness she felt at the end when she didn't think she'd ever get to have a life without all of her family being killed or dying senselessly.
The title of the book comes from exactly what you'd think, a quilt with coffins on it.  The Hatfields make a quilt where they put coffins with everyone in the family's names around the border.  As those family members die, their coffins are moved to the center of the quilt along with their dates of death being put on them.  When Roseanna runs off with Johnse, she begins creating this to give him when they are finally able to be together.  Quilts are big in the McCoy family as well, just nothing as morbid as this.  And when Ro's family sees this and hears what it is, her father, Ranel McCoy forbids her to put any of their family's names on the quilt.  And her extremely religious mother is also greatly opposed to it as well.
I found this book through my bookstore database when working last summer.  I had begun searching for books on this feud after watching the History channel mini-series.  And after reading this book, as I said giving me another viewpoint on the families, I want to read some actual non-fiction biographies or history books.  So I'll be looking for one to read, and put that on my summer reading list.  If you don't know the whole story of the Hatfields and McCoys feud, and haven't watched the mini-series, you should definitely read this book, it's a quick, interesting read, yet very informative in keeping you up with what was going on with the families.  Especially the McCoys.  And if you are looking for a historical fiction book for yourself or a student, or son or daughter, I'd give them this to read.
Posted by Lisa Mandina at 10:11 AM