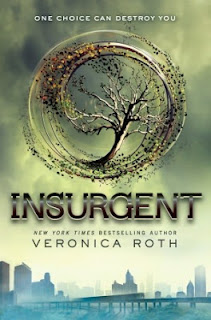 I finally got around to reading this!!  It's been so long since I read Divergent, in fact it's been since April of 2011!!  I tried so hard last year to win an ARC, because I'd gotten to read Divergent as an ARC. And then I didn't get to meet the author at BEA, and I think I would have gotten a copy there.  And then, well, I had to really stop buying books last year.  I mean I got like 50 books at BEA, and I was poor.  Staying for 2 weeks with my sister in NYC cost a lot more money than I had planned.  So, I asked my brother for the Collector's edition for Christmas, and I got it, and as you can see, I still didn't get to it till February!  But it was worth the wait.  While at first it took me a bit to remember all that happened, it still grabbed me right back in with the characters.
We join back with Tris and the other Dauntless that didn't turn into traitors with the Erudite, as well as the Abegnation members that are left.  They've found a place to stay, starting with Amity.  They get attacked and move on to stay with the factionless, and we learn that Four's mother is still alive.  And we learn that the factionless are more organized than thought, and that they want to do something.  They end up with Candor soon, and Tris must tell the one thing she doesn't want to share.  They're also left to deal with Four's father, who Tris doesn't trust, and we learn even more about how he treated his son growing up.  When the traitors soon attack, and are searching for Divergent, even killing them.  Killing one child that was standing right next to Tris.  Also, it is shown that Divergent people in the past have been killed, either by accident or turns out on purpose.  And many people have raised their children to believe that the Divergent people have something wrong with them, and should be left alone. Within this attack, we learn of even more subterfuge, people posing as the Dauntless traitors or Erudite faction to try to find out what is really going on and keep tabs on the movement.  And not only are there spies on what we'd call the "good" side, we learn of a traitor within their own family and friends.  At one point Tris is even taken, or she turns herself in to try to save others, which of course won't work when Four feels he must follow and try to save her.
Tris learns more about her father and mother.  And according to Four's father, there is some secret that Jeanine Matthews doesn't want to share.  But Four's father believes it is necessary to know and let everyone else know.  But the Dauntless faction intends to destroy all the Erudite information so that no one can keep tabs on anyone anymore.  So that they can't try to kill Divergent people.  When we do find out the information that Four's father was talking about, it leaves us hanging, and actually left me with many more questions!  I need to know more!
This was another awesome book in the series.  Unlike many 2nd books, it had lots of action, and wasn't just a bridge to the 3rd book.  And I can't wait until the next book, I assume the final book, comes out this fall!  I intend to not wait so long to read it.
Now, let's talk about the short story, Free Four.  Not actually a free story, just a scene from Divergent, retold from Four's point of view.  I liked it, but it just left me wanting to read more from Four's side!!  If you haven't started the series, you need to start now!!  Great book once again.
Posted by Lisa Mandina at 9:51 PM