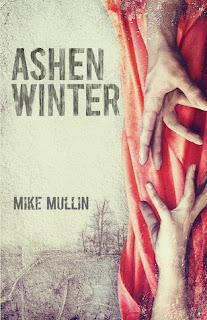 I finally got around to reading this!  Not that I didn't want to, just the size of it I think kept me from picking it up when I had sooooooo many other books to read.  Not that I don't still have a ton, I just decided with our late March snow last weekend that a book like this was the right way to go.  Once I picked it up, it was a quick read, well as quick as I could get through an over 500 page book while teaching every day this week! Not to mention it seemed I had something to do every night this week and I didn't have a lot of nights that I was just sitting around reading.  Until last night, when I finished the last 100-150 pages.  Once I started it I really just wanted to sit and read and find out what happened next, and then after that, and then next, and how would it all end?  And it was another good book.
Okay, so if you read the first book, Ashfall, you know that there was a supervolcano explosion, in Yellowstone National Park.  From that explosion there were major changes.  It threw dust and ashes up into the air, and basically created winter.  It got colder as the sun was blocked out, plants began to die as they had no sunlight and the ash just cover them.  Our main character in this book is again Alex.  He and his new girlfriend Darla, although after all they've been through she is more than just a "girlfriend", found their way at the end of the first book to his uncle's house, where his parents and younger sister were supposed to be.  Only once they got there, they found his parents were gone, they had left to try to find him.  For awhile they stayed and worked on the farm.  The farm did okay because they were able to grow kale, which was good because kale had a lot of vitamin C, which many people need in this time of ashen winter.  In fact the seeds are so valuable, they can use them as money for things that need.  Help from a doctor, information, etc.
The farm gets attacked, and Alex recognizes one of the guns as one that was owned by his father.  So he and Darla follow after these men, called flensers, to find out where they got the gun.  Flensers, a disgusting new group of people, many different groups actually, that eat people.  They are cannibals.  They find out that the gun was traded to this group from a FEMA camp.  Well Alex and Darla remember what it was like to be in one of those camps.  Alex insists on going to find his parents.  He takes many packets of kale seeds.  They also remembered from crossing the river before that there had been a whole barge of wheat grains.  So they, Alex anyway, decides to try to go by there first to get some of the wheat so that they can plant that as well as the kale.  Unfortunately when they reach the barge it is now swarming with the military.  Alex insists that they try to get some wheat from the guard shack.  But the heist goes wrong, and Darla gets shot when they're on a bridge, and she falls off the bridge onto the top of a truck.  And now, Alex must find Darla too.
So he is now looking for not only his parents, but Darla too.  And when or if he finds his parents, will they want to help him find Darla?  Along the way he meets a girl named Alyssa and her autistic brother Ben, and rescues them from one of the Flenser groups.  But will they be able to fit in and  help Alex as well?

Such a good book.  You're on pins and needles all the way.  It's a great apocalyptic survival story, reminded me in some places of The Walking Dead in how much you got involved with the characters.  The author does such a great job with Alex's Tae Kwan Do skills.  And his portrayal of Ben, the autistic character is right on from my experience of the few autistic students I've had in the past.  You can see the way they do have their quirks, and you even smile at points where you can feel Alex's exasperation, but also Alex's learning patience with Ben, and even coming to be able to be a part of Ben's life.  I do love how Ben calls Alyssa his "sister unit".  A great read.  Lots of action, great characters, and even some sadness and heartbreak.  But now, I have to wait until 2014 to read the third book.  *Sad Face*  On a kind of interesting note, the first book in the series was the first e-galley I ever read from Netgalley.  I got an ARC of this one at BEA 2012.
Oh yeah, and I have to include my picture with the author from BEA last summer.  He is such a neat guy!  And you can tell how much he appreciates teachers from just talking to him, and mentioning that I was a teacher got him talking to me for quite a while!