All These Things I've Done (Birthright #1) by Gabrielle Zevin 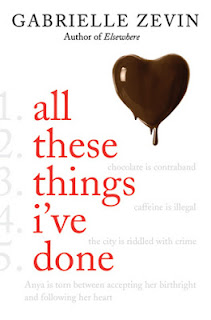 Can I just say, WOW?  Why in the world have I waited so long to read yet another ARC that was sitting on my shelf since before it was published?  I mean this came out in September 2011, so I  got the ARC before then, and it sat on my shelf.  I'd only wanted it because it sounded interesting as a new dystopian style story. I must admit that I am soooooo glad now that I also got the ARC to the 2nd book in the series, Because it is My Blood, at BEA last year when I got to actually meet the author.  Because once I finished this one, I was soooo ready to pick up the sequel.  And now, it seems I'll have to wait until the 3rd one comes out this fall, unless I can somehow find a way to get my grubby little hands on an ARC of it!  That's something I'll be looking into as soon as I finish the second one.  I'll have to make sure to share my reviews with the publicist listed on the books.
This book, well, let me just say that it is almost impossible to put down once you pick it up.  Honestly, there are no "down" or "slow" parts in the book.  Not to say it is all action, excitement, adventure, etc.  But it is always something going on that you want to know about.  Someone that you need to know what is really going on with them, or where they've been, or what they've been up to.  And as I'm reading the 2nd book right now, I'm even trying to figure out if some of the people that are supposed to be the good guys are really good guys, or if the "understandable" mistakes they make, aren't quite the mistakes they are seen as.
In this future society, 2083, chocolate and caffeine are illegal.  Paper and water are both scarce or rationed.  And this story takes place in New York City.  A New York City much like it was probably back in the 20's during the first prohibition, the one with alcohol.  Our main character is Anya, (a name I've loved since Buffy the Vampire Slayer).  Anya is part of the Balanchine family, one of the chocolate families of the world, and basically a mafia.  She is living with her grandmother, who is basically about to die at any time.  Along with Anya, there is her older brother Leo, who isn't quite right in the head since an accident when he was younger when someone tried to kill their father.  And finally her younger sister Nattie.  Both her mother and father died because of her father's crimes.  Fortunately Anya has a great support system in her immediate family, as well as "the family".  She also has her father's lawyer, who is there to take care of her and any issues she may have.  And finally, her best friend Scarlet.  Scarlet is so loyal, she has stuck by Anya through all of the situations that come with being part of an infamous family.
As happens in most teen books, there is a new boy at school.  His name is Win.  Of course Scarlet likes him first, and even though he seems to be flirting with her, Anya would never do that to her friend.  Plus, he is the assistant district attorney's son, and so that's not a good relationship to have for someone with her background.  It does soon become evident to both Scarlet and Anya, that Win and Anya are perfect for each other.  And of course, they fall in love.  But as usual things can't go happily ever after.  Something happens to her family's supply of chocolate, with Anya's ex-boyfriend being the first one to eat the poisoned chocolate.  And she gets accused of trying to murder him since not all of the shipment has been discovered to be poisoned at first.  She gets sent to Liberty Island juvenile detention center.  And wow, it is a horrible place to be.  Liberty Island is where the statue of Liberty is today, although in this future, only part of the statue is left.  Anya gets out thanks to an unlikely friend.  But this doesn't mean things get better.  She has to worry about issues with the family business, even if she doesn't want to.  And when they try to get Leo to come work for them, she worries about what that will lead to for him.  And so she must be responsible for her brother and sister, and hope that her grandmother can live long enough for her to be 18 and be able to legally take responsibility for her sister.  But her grandmother is getting worse, to the point where she doesn't always remember who people are, and she gets mean too.
I won't say much  more about the story, because I don't want to ruin anything, I want you to pick it up and give it a try.  This was such a great book, like I said, I hated every minute that I had to put it down.  And I'm feeling the same about the sequel as I read it now.  Now, there was one other part of the book that really drew my attention, and that was in the second chapter when one of the teachers started talking about prohibition.  What both he said, as well as what Anya remember her father saying about the same issue, just really stood out to me and made a lot of sense.  I don't remember the exact bit that really hit me, but it was the whole idea and how it stood out that something being banned could supposedly solve all the other issues, but how people will always find a way to get what they want, and there will always be criminals willing to provide it. 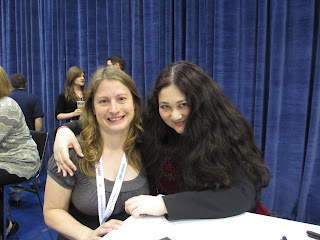