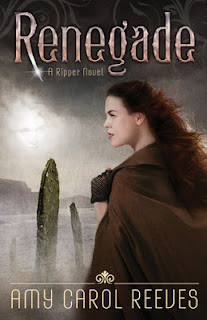 I will start by thanking Netgalley and Flux Books for allowing me to read an e-galley of this.  I also got to read the first in the series, Ripper, as an e-galley.  I was very into the first book because it was supposedly about Jack the Ripper which is a subject that has always fascinated me.  And yes, the first book was, but not quite the way we've always thought of him.
In this sequel, it is after Abbie has taken care of all of The Conclave, except for Max, who got away.  She and William are trying to enjoy their new romance, while continuing to work at the White Chapel Clinic.  Abbie has another vision, but is worried about telling William.  She does feel able to tell Simon about it though.  Although no one seems to believe her when she ends up in the cemetery that was in her vision and she sees what seem to be either zombies, or cannibals.  She also gets the chance to go work with the one woman doctor that she really looks up to.  But, as they know, Max is still there, and he soon visits Abbie and asks her, no ends up basically blackmailing her to help him out.  Throughout the whole story we have flashes over to a Lamia.  A part woman, part sea creature, not like a mermaid, more like almost a dragon.  She is the caretaker for the Conclave, taking care on a remote island of their menagerie.  All their creatures, including the dodo that Abbie had gotten the chance to see in the first book.  Inspector Abbiline is still in this story, now investigating the murders that are occurring in the graveyards.  We do end up basically settling the story point from this, with the Lamia, but we don't ever get the part of the story with the deaths in the graveyards solved.  I'm guessing that will be in the next book.  And I'm very interested and excited to read on!  Another fun take on a secret society and a strong female character of the time.
Posted by Lisa Mandina at 9:00 AM