He can't win if he's playing The Wrong Game


The Wrong Game, an all-new angsty, emotional and fun sports romance from Kandi Steiner, the bestselling author of A Love Letter to Whiskey, is LIVE! 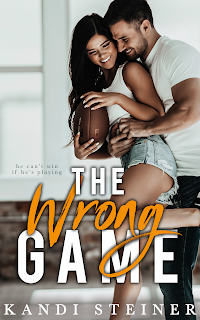 
Zero interest in a relationship.


The plan is simple: a brand new, hot, preferably funny, definitely single male will fill one of those seats for every Bears game at Soldier Field. And I’ll fill the other.


I can’t think of a better way to use the season passes I’d bought for my ex-husband. I am a woman of plans, and this one’s foolproof.


Until Zach Bowen offers to be my practice round.


He’s infuriating. Presumptuous and overbearing. And absolutely, undeniably gorgeous. Any woman with a heartbeat would be attracted to him, and mine picks up speed every time he speaks.


He can try to change the rules, but here’s the truth: he can’t win if he’s playing the wrong game.


Download your copy today or read FREE in Kindle Unlimited! 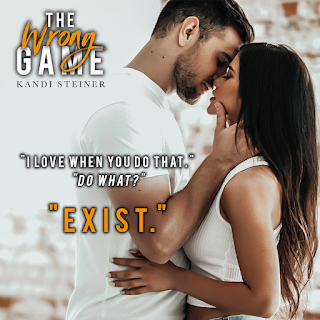 This book was so much fun!  It started out with a definite emotional back story, but I loved all the humor and was so much in love with Zach.  While I totally understood Gemma's reasons for holding back, and taking a new guy to each game, I definitely was thinking she was making a huge mistake letting him go too soon, at first that is.  I mean, after their "practice" game, when he took her home and yeah, did what he did?  And was happy to still be tasting her after he left?  Wow.  I want my own Zach.  I loved how persistent Zach was, willing to fight for Gemma.  To me the way he kept reaching for her, even after she kept pushing him away was so real.  He had that feeling about her. the one that supposedly told him she was the one, from the first time he met her.  It was that wonderful fairy tale feeling that everyone wishes they'd get.  There were moments in the story that I still got emotional. And then there were parts of the story when Gemma would start to freak out that her friend Belle, or even sometimes Zach himself, were able to help pull her from the brink of her meltdown and push her the right way, or at least off the path of destruction.

The side characters in the story were also a delight.  Of course Gemma's best friend Belle was someone to love.  She didn't have any ulterior motive behind what she suggested for Gemma, other than her care and love for her.  She saw what was right for her, and tried to steer her that way, even when it was maybe the opposite of what she'd said in the first place.  Zach's family was wonderful as well.  A true, loving family, a hilarious banter between all of them, built from the struggles they'd seen, but also just a real, loving family.  One that reminded me of my family at times.  Then there was Doc, Zach's boss.  I had a feeling his reason to keep trying to get Zach alone for a "talk" was basically what it was, even though I had suspicions it was for something different than it turned out to be.  Then there were the other characters at the Chicago Bears' football games.  Perfect.  They were the way I'd imagine season ticket holders might be.  Chicago as a setting was one I enjoyed as well, since I love that city and at one time thought it would be somewhere I'd like to move.

The sex was steamy, and started off pretty quickly.  In a way that I felt was just right, and set the tone of the story perfectly.  Now, my one issue, that kept me from giving a full 5 stars, was how Gemma lost it at the end.  I knew the final straw would have something to do with why her ex-mother-in-law was looking for her.  And what she got from that final meeting was definitely a punch in the gut. But to me, it should have sent her right to Zach, showed her that she finally had a true love.  Once again though, Zach pulled through in a way that made perfect sense to me.  He was able to still be rightfully brokenhearted over what Gemma had said and done, but also able to see past that, and know that what he felt for her was really something special and worth fighting for.

This is my first book by Kandi Steiner, and I'm pretty sure it is just the first of many that I will read from her. 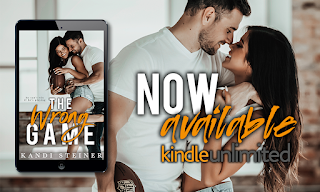 
Kandi Steiner is a bestselling author and whiskey connoisseur living in Tampa, FL. Best known for writing “emotional rollercoaster” stories, she loves bringing flawed characters to life and writing about real, raw romance — in all its forms. No two Kandi Steiner books are the same, and if you’re a lover of angsty, emotional, and inspirational reads, she’s your gal.


An alumna of the University of Central Florida, Kandi graduated with a double major in Creative Writing and Advertising/PR with a minor in Women’s Studies. She started writing back in the 4th grade after reading the first Harry Potter installment. In 6th grade, she wrote and edited her own newspaper and distributed to her classmates. Eventually, the principal caught on and the newspaper was quickly halted, though Kandi tried fighting for her “freedom of press.” She took particular interest in writing romance after college, as she has always been a diehard hopeless romantic, and likes to highlight all the challenges of love as well as the triumphs.


When Kandi isn’t writing, you can find her reading books of all kinds, talking with her extremely vocal cat, and spending time with her friends and family. She enjoys live music, traveling, anything heavy in carbs, beach days, movie marathons, craft beer and sweet wine — not necessarily in that order.


Kandi Steiner may be coming to a city near you! Check out her “events” tab to see all the signings she’s attending in the near future: