Review - Americanized: Rebel Without a Green Card by Sara Saedi 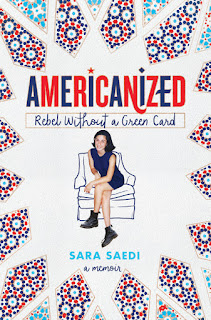 Perfect for fans of Mindy Kaling and Lena Dunham’s books, AMERICANIZED: REBEL WITHOUT A GREEN CARD is the true story of one teen’s experience growing up in America as an undocumented immigrant from the Middle East.
In AMERICANIZED, bright-eyed, straight-A student Sara Saedi uncovered a terrible secret at age thirteen: she was breaking the law simply by living in the United States. Only two years old when her parents fled Iran, she didn’t learn of her undocumented status until her older sister wanted to apply for an after-school job, but couldn’t because she didn’t have a Social Security number.
Fear of deportation kept Sara up at night, but it didn’t keep her from being a teenager.
She desperately wanted a green card, along with clear skin, her own car, and a boyfriend. AMERICANIZED follows Sara’s progress toward getting her green card, but that’s only a portion of her experiences as an Iranian-“American” teenager. From discovering that her parents secretly divorced to facilitate her mother’s green card application to learning how to tame her unibrow, Sara pivots gracefully from the terrifying prospect that she might be kicked out of the country at any time to the almost-as-terrifying possibility that
she might be the only one of her friends without a date to the prom.
AMERICANIZED combines the timely topic of immigration with poignant and engaging voice that young readers won’t be able to put down!

My Review:
Just like the last line of the synopsis above says, this was one book that was hard to put down.  As a child of the 80s, this book was a real eye-opener to me about political issues and other history that took place during that decade, as well as the ones before and after.  I remember hearing a lot of the terms discussed in the book, but growing up as a white, middle-class child, those were things I heard on the news, that I never watched, and hated the fact that my parents made me turn off whatever afternoon show I would rather watch, or even switch off MTV during a video I loved so that they could see what was going on.  Obviously, the author of this book had a very personal connection to issues and people such as the Ayatollah Khomeini, the American hostage situation in Iran, the Iran-Iraq war, and more.  The author lived in Iran with her family until she was 2 years old, at which time her mother and older sister moved to America to escape all of the scary things that were going on.

To  learn that all of the ways we think of for Muslim women to dress, and the other conservative ways actually is newer to the country instead of something that has been a constant, well that blew my mind.  So much to learn from this book.  I always love when a memoir explains the family dynamics and culture of a country or group of people I don't have much experience with.  This book reminded me a lot of Mindy Kaling's first memoir:  Is Everyone Hanging Out Without Me? (as referenced in the synopsis), but also of Kunal Nayyar's (The Big Bang Theory) memoir:  Yes, My Accent is Real:  And Some Other Things I Haven't Told You.  I love hearing how families of other cultures are different from my own, and even sometimes just how similar we all are at the heart of things.

Not only did I learn more about historic events and Iranian culture, I also learned a lot about how someone becomes a citizen of the United States, but especially about what they have to do just to get a green card.  I learned that some terms didn't mean exactly what I thought they did, what they sound like they mean.  For instance, an undocumented immigrant isn't necessarily here illegally.  It could mean they are just waiting on their applications to be processed.  They may be here on a work visa, and not have a green card yet.  Getting those documents can mean getting a social security number, which then means that they pay taxes on the money they earn when they work.

I honestly feel that this is a really great book for all of the students at my high school to read.  There are those that are growing up sheltered, like I did, that will learn so much from this story, that can help them to make well informed decisions on how they vote and who they vote for.  For my students that may be in a similar situation, worried about DACA and the other bills being passed or taken away, this is a great book to read and know that others have gone through the same process, and understand.  That it can work out, you just have to be persistent and patient at times.

I'm very glad that I read this, and can't wait to get a copy to put in my school library for my students (and teachers) to read.
Posted by Lisa Mandina at 6:30 AM