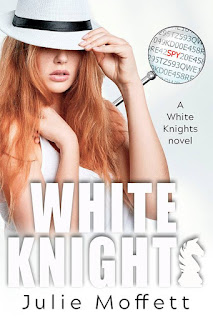 Synopsis:
My name is Angel Sinclair. I’m the youngest senior at Excalibur Academy for the Technologically Gifted and Talented in Washington, DC. I was pushed ahead a year because of my high IQ and considerable prowess behind the keyboard, making me an outcast even among my own peers. I’ve been looking for my dad all my life. A brilliant mathematician and cryptographer, he disappeared under mysterious circumstances when I was 18 months old. Although my mom tells me I must put him in my past, it only makes me more determined to find out what happened to him. When weird accidents start happening at my school and the vice-principal is involved in a deadly accident, I don’t see it as a coincidence. After launching my own investigation, with the aid of an unexpected set of allies calling themselves the White Knights, I discover a threat far greater than I ever could have imagined. I could take my discoveries to the authorities, but my own investigative methods would be at risk. Can anyone say hacking? No, it’s up to me to set things right. My objectives are straightforward. Clear the name of the vice-principal, learn the truth about my father, and stay alive. In other words, save the day and try not to look too much like a dork while doing it.

On the 5,802nd day of my existence, my safe virtual life exploded into reality.

I should have seen it coming—I’m smart enough. My name is Angel Sinclair and I’m a geek. For most of my nearly sixteen years, I’ve lived online, roaming the information highway—hacking, gaming, and manipulating the environment to suit my every whim. The Internet is my world. I control kingdoms and maintain important and critical alliances. I don’t need real-life entanglements, friendships with people who will come and go, or a boyfriend so I don’t feel alone. I’m never lonely online.

I’m not bragging when I say I’m good at what I do. When I was eleven, I broke into my school’s computer system, just to see if I could. At thirteen, I changed the Twitter profile of a well-known gamer to read “Geek Girls Rule” after he posted a particularly sexist and ugly meme about women in the tech field. Later that same year, I hacked into the local police department looking for information on my father. I’ve hacked a lot of places since then, getting better and faster each time. I’m not into cracking—hacking with malicious intent. But I’m not above a hack when I feel it serves the greater good.

My older sister, Gwen, is always getting on my case to go out, hang with people, be social off the computer. Why would I? The girls at my school are always talking about guys or taking selfies to make sure they post the best angle of themselves. Who cares how you look while you’re eating in the cafeteria? I’d rather connect with the people who do matter via my phone or laptop. Online I’ve got constant access to what and who is important, and it is way less stressful than a face-to-face conversation.

So, my plan for my senior year of high school was this—survive by keeping my head down, restricting my social life to online, and not making any waves.

I desired invisibility but would have accepted peaceful coexistence.

Instead, they brought me war…on the very first day. 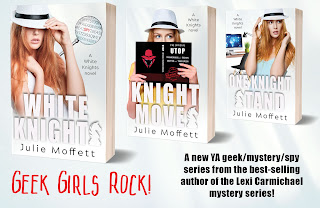 
1.   What does your writing process look like? Do you know the whole story when you start?  Or do you just start writing and go with it (seat of the pants writing)?  If you plan it out, how do you do that?  Outline, notecards, post-it-notes, etc.

I write with a detailed outline. I storyboard on one of those science fair trifold boards. I use color-coded sticky notes (one color for each character, a color for action and/or events, and a color for emotion) and stick them on the board in the rough order of how I want things to play out in the novel. When I’m ready to write the chapter, I pull down the sticky notes and know exactly what needs to go in the chapter. Things don’t always go as planned—that’s part of the creative process, and that’s okay. Still, my plots can be complicated with a lot of moving pieces and international travel, so I’m a careful plotter. I like to write series, so I create a series arc, as well as detailed character arcs, and finally the plot arc for each book within the series. I’ve don’t this with all 11 books (so far) in my geeky Lexi Carmichael series, and now for the White Knights series. It’s a bit of different process when writing a stand-alone novel, of which I’ve done several. But I’m a definite plotter and outliner.

My stories revolve around geeks so it’s a good thing that most of my family qualifies in that category. Wacky, technically-absorbed and wonderful!! However, I do quite a bit of research on the other scientific aspects of my stories to make it as accurate as possible while still having fun with it. People (some I know and some I don’t), as well as events in real life, inspire me. The characters encompass a lot of traits from many different people, myself included.
3.  How long have you been writing?

I’ve wanted to write stories as long as I can remember. I wrote my first book in the second grade when I penned a love story between Prince Valen and Princess Tina who met, fell in love and got married on Valentine’s Day. I still have it. It was a big hit with all the girls in my class. The boys held their noses. After that I won a 3rd grade poem contest about a haunted house. In the fourth grade, I wrote in my school memory book that I wanted to be an author when I grew up. I wrote for my college newspaper, and later moved into international journalism. Eventually I got brave enough to pen a novel for publication purposes. My first book was published in 1993 and was a Scottish historical romance called Fleeting Splendor. So, I’ve been around the block, so to say!

Writing is a pain in the butt, literally! Ha! But I’m serious when I say you must plant butt in char and write, a lot. Get your story out. Don’t worry if the first draft is crap, you can fix it. You can’t fix a blank page. Just don’t give up. If you want it bad enough, you’ll get it. Persevere!

Books/authors/genres: I am a voracious reader across all genres. Those authors influenced me by making me love reading so much it made me want to write my own books. I love Mary Stewart, Victoria Holt, Michael Crichton, Robert Ludlum, John Le Carre, Robert Crais, Dean Koontz, Stephen King, JK Rowling, Tess Gerritsen and Nora Roberts/JD Robb, among a thousand others. I adored Nancy Drew and the Hardy Boys books as a kid. There are SO many more. I really love books of all kinds!!

Movies/TV Shows: Mostly classic movies: The Princess Bride (!), Star Wars, Harry Potter, the Matrix trilogy, Hunger Games trilogy, Star Trek and Indiana Jones. My two sons make sure I stay current on all the Marvel movies, most of which I like. In terms of TV shows, I like Supernatural (Dean!!), Stranger Things, Agents of Shield, and that American Ninja Warrior show where people try to complete those impossible obstacle courses!
Music: I listen to music ALL the time while I work. I like just about every genre of music and have a zillion playlists. I pick a random playlist every day and just go with it.

Food/Writing snack: Popcorn, all flavors except the super spicy ones, and the Blue Diamond Bold Almonds Habanero BBQ. Once I start eating them, I can’t stop. Mmmmmmm! So good! 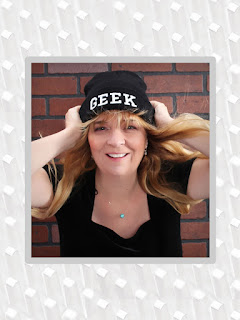 Julie Moffett is a bestselling author and writes in the genres of mystery, historical romance and paranormal romance. She has won numerous awards, including the 2014 Mystery & Mayhem Award for Best YA/New Adult Mystery, the prestigious 2014 HOLT Award for Best Novel with Romantic Elements, a HOLT Merit Award for Best Novel by a Virginia Author (twice!), the 2016 Award of Excellence, a PRISM Award for Best Romantic Time-Travel AND Best of the Best Paranormal Books of 2002, and the 2011 EPIC Award for Best Action/Adventure Novel. She has also garnered additional nominations for the Bookseller’s Best Award, Daphne du Maurier Award and the Gayle Wilson Award of Excellence. Julie is a military brat (Air Force) and has traveled extensively. Her more exciting exploits include attending high school in Okinawa, Japan; backpacking around Europe and Scandinavia for several months; a year-long college graduate study in Warsaw, Poland; and a wonderful trip to Scotland and Ireland where she fell in love with castles, kilts and brogues. Julie has a B.A. in Political Science and Russian Language from Colorado College, a M.A. in International Affairs from The George Washington University in Washington, D.C. and an M.Ed from Liberty University. She has worked as a proposal writer, journalist, teacher, librarian and researcher. Julie speaks Russian and Polish and has two sons. She greatly enjoys interacting with readers at her website: www.juliemoffett.com.

Giveaway #1:
This is one sponsored just by my blog, and it is for an ebook of White Knights, and a magnet.  Since my stop is toward the end of the tour though, you only have until January 7th to enter!  Just enter the rafflecopter below this paragraph.  Only one thing you have to do, go visit my Facebook page.  This is US only.

Giveaway #2 - Grand Prize:
Paperback copy of White Knights and a "The Princess Saves Herself" magnet; open US only.