We are pleased to be shining the spotlight on the chick lit/contemporary fiction, Along Came Jones, by Victoria Bernadine. 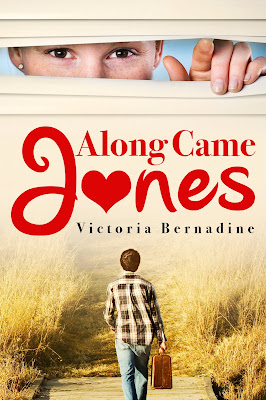 Benjamin Ferrin Macon-Jones has it all: a luxurious lifestyle in Toronto and the love of an intelligent, ambitious woman…until that same woman refuses his marriage proposal, tells him he’s a detriment to her career, and leaves him. Unable to deal with his cantankerous family trying to be supportive, he quietly slips away into the Canadian countryside.

Lou Upjohn has problems of her own. She’s a recluse and agoraphobic, staying safely within the walls of her ancestral home in small town Saskatchewan and depending on Ike, her best and only friend, to deal with the outside world. Only Ike’s just married another woman and now he’s moving to Vancouver. Before he leaves, he hires the new guy in town, Ferrin Jones, to run her errands and do her yard work. Lou isn’t happy, but even she has to admit the stranger looks mildly interesting.

Both their lives could be changed forever if she only has the courage to open the door.

1.  What does your writing process look like? Do you know the whole story when you start?  Or do you just start writing and go with it (seat of the pants writing)?  If you plan it out, how do you do that?  Outline, notecards, post-it-notes, etc.?

I’m a pantser although I become a planner as the story progresses.  I start with an idea:  a snippet of dialogue, a scene, a character, a situation—and then I write that idea/moment and see where it takes me.  If it leads me to a longer story, I will eventually end up ‘planning’ the story because I will sit down and work out why something is happening or character motivation, etc.—but that happens after the story is already being told.

My ideas are inspired by, well, everything and anything, really.  A song, a person I pass on the street, a TV show that makes me say ‘what if…’, a dream.  Name it, and I’ve probably been inspired by it at some point.  Whether those ideas grow into something more than a moment is anybody’s guess until I start writing and see where it takes me.

I wrote all the time as a kid but never finished anything.  I started writing again in 2008 and I haven’t looked back since!

Read a lot and write a lot.  Read so you know what you like in a story and you can learn from incredibly skilled writers what it means to structure a story, pacing, character development, the turn of phrase.  Write a lot because the only way to find your own voice is to practice and experiment and learn what works for you and the stories you want to tell.

5.   What are your favorite:
Books/authors/genres:  Can I just say all of them?  Seriously, I read everything and I have favourites in every genre.  For example:  Sci fi – Isaac Asimov – the Foundation series; Fantasy – Lloyd Alexander – the Chronicles of Prydain; Mystery – Agatha Christie – every novel she ever wrote; Western – Louis L’Amour – the Sackett novels; etc., etc., etc.
Movies/TV Shows – The Star Wars and Star Trek franchises, of course.  The Iron Man movies (I adore Robert Downey Jr.!!).  As for TV, Broadchurch is probably the best TV show I’ve watched in the last five years.
Music – I listen to everything except jazz and rap (although I will listen to those, too; I just don’t like them that much), however, my favourite genre is country and my favourite singer is Johnny Cash (with Jimmy Buffett in a neck-to-neck race with him).
Food/Writing snack – Potato chips.  I can resist sugar but I can never resist salt.

Victoria Bernadine (a pseudonym) is, as the saying goes, a "woman of a certain age". After twenty-something years of writer's block, she began writing again in 2008.
Victoria enjoys reading all genres and particularly loves writing romantic comedy and post-apocalyptic science fiction. What those two have in common is anybody's guess.
She lives in Edmonton with her two cats (The Grunt and The Runt).  Along Came Jones is the second novel she felt was good enough to be released into the wild.