Still playing catch up with my reviews, and thought I wanted to get these three done before I get to meet this awesome author next week at ApollyCon.  As I've done with all of her books, I listened to these three on audio. The first two books in the series are about Simon and Caroline.  Book three was about one of Simon's high school friends that we met in book 2, Vivian Franklin and her search for romance with either Hank the cowboy, or else Clark the librarian.  I'll give my thoughts below for each book, followed by the blurb from Goodreads.  And before I even get started, I will tell you that I love this series! 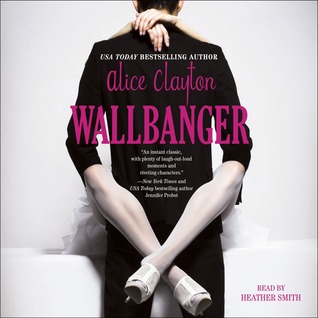 As with every other book I've read by Clayton so far, this was so hilarious!!  The names that Caroline comes up with for Simon's harem of women are hilarious.  The fact that this titles of this series are not only the names of cocktails, but also dirty sounding even as they do fit in with the stories is another thing that I love.  Simon is called the wallbanger because when his harem is visiting, his bed literally bangs her wall.  And I love her cat, Clive, he is so funny.  I love that the last chapter is from his point of view as well.  It just ends the book perfectly!  Clayton knows how to ramp up what is so ridiculously hilarious as one thing after another goes wrong, I could totally see her books as movies, starring maybe Amy Adams?  Or maybe Anna Faris? And then she adds in chapters that are totally different from how the rest of the book has been. Something that might seem kind of jarring from the outside, but within the book it totally works.  It works so well that even though the rest of the book is from Caroline's viewpoint, the one part where we get the inner thoughts of everyone helped save Simon for me after he did something that totally made me wonder how he could be redeemed for me.  And while the majority of the book did not include any sex, well at least not for Caroline, other than what she heard Simon doing through her bedroom wall, I think the author made up for that by making the whole last chapter them trying to get Caroline's O back. Read it, you'll get it.  Here's the blurb.

The first night after Caroline moves into her fantastic new San Francisco apartment, she realizes she's gaining an intimate knowledge of her new neighbor's nocturnal adventures. Thanks to paper-thin walls and the guy's athletic prowess, she can hear not just his bed banging against the wall but the ecstatic response of what seems (as loud night after loud night goes by) like an endless parade of women. And since Caroline is currently on a self-imposed dating hiatus, and her neighbor is clearly lethally attractive to women, she finds her fantasies keep her awake even longer than the noise. So when the wallbanging threatens to literally bounce her out of bed, Caroline, clad in sexual frustration and a pink baby-doll nightie, confronts Simon Parker, her heard-but-never-seen neighbor. The tension between them is as thick as the walls are thin, and the results just as mixed. Suddenly, Caroline is finding she may have discovered a whole new definition of neighborly...

In a delicious mix of silly and steamy, Alice Clayton dishes out a hot and hilarious tale of exasperation at first sight... 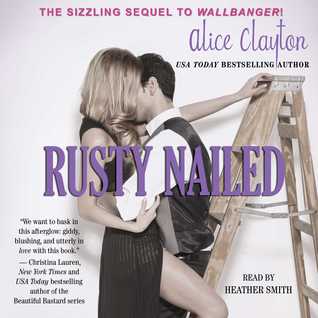 This book has Simon and Caroline still together and having a pretty great relationship, the traveling that Simon does for his job only leading to great sex when they get to get in the same place at the same time.  Caroline doesn't mind the time alone because she has kind of partly taken over her boss's job while her boss is on her honeymoon.  A honeymoon that they don't know when they will come back.  During the time Caroline is also house sitting for her boss, and getting to enjoy Sausalito.  But Simon starts staying home more, not taking as many trips, and it is beginning to drive Caroline crazy.  All these little changes about the time they go to his high school reunion.  Something that is very hard for Simon because of when he lost his parents in high school.  But going home turns out to be a good thing.  It seems it has made him want more like what he grew up with, more with Caroline.  So while he's staying back, he finds a house in Sausalito, a beautiful old house, but one that needs a ton of work.  He figures with Caroline's expertise in the field, they can remodel the house, and they can do it however they want because Simon is extremely wealthy.  Now, I do get a little annoyed with Caroline at times in this book.  While I understand the needing alone time, I've lived alone since I was 23, I can't imagine being as upset as she is about things.  But something happens that was so sad that I couldn't stop the tears.  But in the end it works out, and it works out in such a funny way.  Once again the last chapter is done in a perfect way to end the book.  There are some great issues with Caroline's friends and Simon's friends too, not everyone's relationships are going smoothly, no matter how perfect they may seem to be for each other.  Here's the blurb from Goodreads:

In this sequel to Wallbanger, the second book in the Cocktail series, fan favorites Caroline and Simon negotiate the rollercoaster of their new relationship while house-sitting in San Francisco.

Playing house was never so much fun—or so confusing. With her boss on her honeymoon, Caroline’s working crazy long hours to keep the interior design company running—especially since she’s also the lead designer for the renovation of a gorgeous old hotel on Sausalito. So with her hotshot photographer boyfriend gallivanting all over the world for his job, she and Simon are heavy-duty into “absence makes the heart grow fonder” mode. Neither has any complaints about the great reunion sex, though! Then Simon decides he’s tired of so much travelling, and he’s suddenly home more. A lot more. And wanting Caroline home more, too. Though their friends’ romantic lives provide plenty of welcome distraction, eventually Caroline and Simon have to sort their relationship out. Neither wants “out of sight, out of mind,” but can they create their own happy mid-ground cliché? 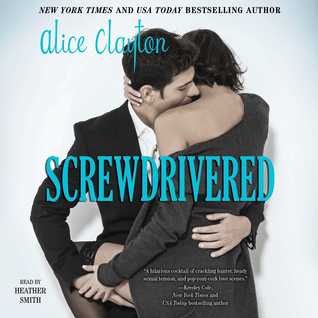 This time we get a totally different character, Viv Franklin.  While I wasn't sure at first how much I would like her, she was an interesting character in the last book and I wasn't sure how much she would be my type of protagonist.  But Viv is a romance book reader and a dreamer of a romance like that.  When she gets a call in the middle of the night just like something that might happen to a heroine in one of the romance novels she reads, she figures she must now be living in her own romance novel.  And when she sees Hank the cowboy, she figures he must be the hero put there for her.  Only Hank at first doesn't seem very smart.  But by the end of the book it isn't that necessarily, he's really just an ass, and totally not anyone Viv should have kept trying for.  Hot cowboy or not.  But then there is Clark the librarian.  Here is the part of the book where Clayton lets all the craziness flow, things just get so ridiculous, it is totally like a movie.  When she punches him when she's out running.  When she gets her leg stuck through the hole in the porch, the bat in the house, I could go on and on.  I'm a little irritated at Vivian for throwing herself that one last time at Hank. But I'm also irritated with Clark for how he behaves just because Hank shows up and tries to be a bully to Clark when Clark then pushes Vivian away.  But as it always goes, there is the happy ending.  And like the first book in the Cocktail series, there pretty much isn't any sex, other than dreams and fantasies, until the very end of the story.  But when it happens, it is totally worth having had to wait that long.  I can't wait to read/listen on.  In fact, if I wasn't currently so entranced by the K. Bromberg Driven series so bad that I HAVE to get the next book and go on with the cliffhangers, I'd have book 4 ready to go next from the library audiobooks.  We do get to spend some time with Caroline and Simon in this book.  You see Clark is being adamant about what Viv can and can't do to fix up the house because it is a historical building, so Viv calls Caroline in to back her up, only it doesn't quite go exactly the way Viv had hoped.  Here's the blurb for this one from Goodreads:

Readers back for a third round of the bestselling Cocktail series will enjoy a madcap romantic comedy about bodice ripping and chest heaving, fiery passion and love everlasting. Plus a dash of paperwork filing and horseshit, wait, what?

By day, Viv Franklin is a tough-as-nails software engineer who designs programs and loves hospital corners. By night, Vivian is a secret romance-novel junkie who longs for a knight in shining armor, or a cowboy on a wild stallion, or a strapping firefighter to sweep her off her feet. And she gets to wear the bodice; don't forget the bodice.

When a phone call brings news that she's inherited a beautiful old home in Mendocino, California from a long-forgotten aunt, she moves her entire life across the country to embark on what she sees as a great, romance-novel-worthy adventure. But romance novels always have a twist, don't they?

There's a cowboy, one that ignites her loins. Because Cowboy Hank is totally loin-ignition worthy. But there's also a librarian, Clark Barrow. And he calls her Vivian. Can tweed jackets and elbow patches compete with chaps and spurs? You bet your sweet cow pie.

In Screwdrivered, Alice Clayton pits Superman against Clark in a hilarious and hot battle that delights a swooning Viv/Vivian. Also within this book, an answer to the question of the ages: Why ride a cowboy when you can ride a librarian?

I cannot wait until next week when I get to meet Alice Clayton, in fact I get to help out with her line at ApollyCon.  I am going to try so  hard  not to be a total dork of a fangirl, but I don't know if I'll be able to help it.  If you haven't read any of Clayton's books yet, and you enjoy a good romantic comedy with a dash of steaminess, then these are the books for you, you need to pick one up today!
Posted by Lisa Mandina at 2:08 PM