Who is Mason Reeves?
Corrine Rivers and her cousins desperately need to find out. Evidence suggests he’s the illegitimate child of her beloved Uncle Grant. The truth is just as hard to bear.
What’s also hard is Mason himself. All over. From his broad, muscular chest and massive biceps to his “screw you” attitude. Because Mason Reeves wants nothing to do with his inheritance or the wealthy Rivers clan, and isn’t afraid to say so.
As Mason’s tragic connections to Corrine’s family emerge, the facts are reason enough for her to stay away. But she can’t seem to resist him, and what’s worse, he feels the same way about her. To everyone’s surprise, Corrine and Mason get in deep, in more ways than one. But it turns out the biggest obstacle to their happiness isn’t Mason’s past.
It’s hers.

Goodreads / Amazon
—
EXCERPT:
Standing behind me, he says, “Corrine…” with that damned heated desire for me practically dripping from his voice. I ignore him.
I tug the ribbon at the back of my head, removing the mask and slapping it on the table.
I’m only just standing here, but I’m breathing hard and shallow. His breaths are coming hard too, but still he doesn’t move. He crossed half the country to get to me, but he won’t close the final one-foot gap.
I want to say that I wish he’d never come, but it’d be a big, fat lie. Even though it would’ve been so much easier, even though I’m hurt and angry about the situation we’re in now—which I know isn’t even his fault—my heart still clings to every second I’ve had with him, wishing so hard for more.
I hear his mask drop on the table next to me.
“Why did you even bother coming?” I spin to face him. And there he is. All him. No mask. No hiding. Only Mason. Just looking at him consumes me.
He doesn’t answer. His eyes grip me and his breath comes out in hard, little puffs. The intensity of his stare halts my own breath. God, he looks like he’s going to attack.
Then he does. He rushes me, cupping my face and backing me against the wall. I let out a gasp.
“I know this is a bad fucking idea,” he says heatedly, “but I’m so tired of fighting it. The whole flight over, I kept asking myself what the fuck I’m doing, but I have no idea. I only know I can’t take this any longer.”
Having this much testosterone aimed in my direction is making my ovaries pop. He’s so fucking male. I’m pinned, the wall behind me and nothing but Mason in front. He dominates everything I see. All I know is his hard body against mine, his hot breath on my lips, his gaze seizing me. I can’t look away. I can hardly breathe.
“I can’t resist you. I have to have you.” His eyes lock on my mouth. “I have to taste you.”
Stripped of the ability to speak, I can only part my lips in invitation. Begging him to give in at last. 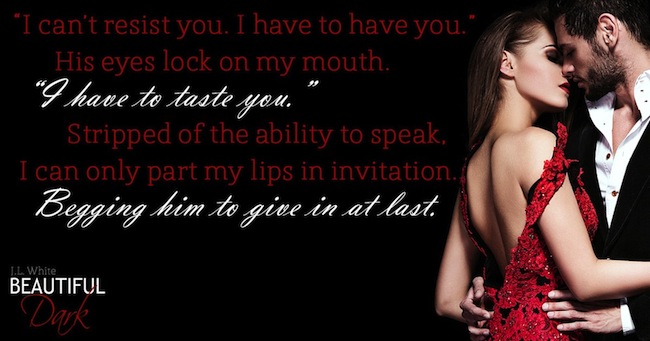 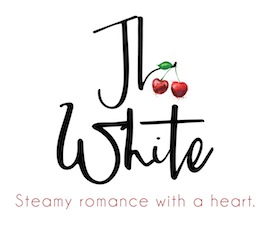 Author Bio:
J.L. White writes sassy, steamy contemporary and new adult romances featuring smart heroines and the swoon-worthy men who adore them. If you’re tired of heroes who are jerks, heroines who are too stupid to live, and relationships that scream “train wreck” instead of “true love”, she’s your girl.
Her first series, the Firework Girls, centers around four amazing, hilarious girlfriends. Her newest series, Beautiful Rivers, follows the young heirs of the luxurious Rivers Paradise Resort as they find love.
Each book can be read as a STANDALONE, comes complete with a HEA, and is guaranteed to make you squirm.