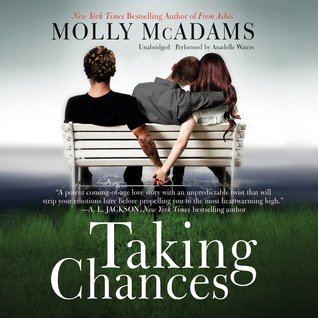 This is a book that I decided to listen to when I was searching for new digital audiobooks on my library website while I waited for others to be available.  I'd heard a lot of good things about it, and it sounded like a really good story.  Overall it was a pretty good story, especially the first three-quarters of the book.  After that, well, it kind of got boring.  Really I guess that shows me that you have got to have some kind of turmoil or obstacle to keep the story interesting.  Although honestly, the majority of the people and relationships in the book were kind of good ones.  The kinds of relationships that I know I would have with my family, and would hope to have with any guy I really dated or ended up with.  And really, a story about my life would be pretty boring.  However, the first part kept me wanting to get back in the car and listen some more, or spend extra time at the gym so I could keep listening.  And even the end, when I was a little bored, knowing that there had to be at least one more conflict coming, even though I was kind of sure of what it would be, and I was right, that kept me reading.

The main character is a girl named Harper.  Harper was raised by a single dad, a very strict military dad.  So she has lived her whole life surrounded by Marines.  When she gets to college, things are going to change.  And she wants them to, that's one reason she chose to go to college so far away from her father.  She ends up with an awesome roommate, really, so awesome I was a bit worried and had flashbacks of Steph in the After series at first, I may be scarred because of that series.  Her roommate knows a "house" of guys, not sure if it is a fraternity?  One of the guys is her roommate's brother.  Since Harper is ready to kind of go crazy and get wild, she starts by going to a party at their house.  Most of the guys are really friendly, but there is this one guy, one of the hottest guys she's ever seen, who she sees with a different girl almost every time she sees him.  But he's kind of an arrogant ass to her at first.  Soon she finds out this is her roommate's brother, Chase.  Of course all the guys find out when her drunk roommate lets it slip that she is a virgin.  A virgin in every way, not even having ever been kissed.

While there is a definite attraction between Chase and Harper, she also meets another guy who lives in the house named Brandon.  She and Brandon also have an almost instant attraction, and hit it off right away.  Brandon seems to be extremely infatuated with her right away, and really is the perfect gentleman in all ways.  There is a bit of a competition/rivalry between Chase and Brandon, but Harper knows that she really likes Brandon.  So the romance between Brandon and Harper takes off.  Every once in awhile though, Chase sneaks into her thoughts and even tries to get her to show she is attracted to him as well.  One slip up between Chase and Harper leads to a major change and things between Harper and Brandon will come to a screeching halt, while she will have to look at how she really feels about Chase, and if he can be a good part of her life.  Later on the loss of one of the guys will lead us to find out just how perfect both of these guys are, when the one who is left is happy to be back in her life, no matter what happened before, and will accept her no matter what, because all they ever wanted is for her to be happy because they loved her.

Honestly, the guys were perfect, possibly a little too perfect.  But hey, after people criticizing so many dysfunctional relationships in books as being a bad example for younger readers, then maybe the guys in these books that are so perfect and loving and would never hurt Harper are the ones they should read about?  The "real" and "modern" Prince Charmings?  I'm not complaining.  When I like to kind of sit and fantasize in my head, on long road trips, boring meetings, whatever, I often prefer to have the guys be this perfect in those stories.  And maybe after the crazy back and forth, up and down relationship between Tessa and Hardin in the After series, this was a little bit of a break.  I do have to warn that if you didn't already get it from my review, there is a love triangle, and actually even a 3rd guy in there at one point, does that make a love square?

I would say this is a sweet read, maybe a tad bit boring towards the end, and the perfect guys definitely a bit unbelievable, but if you can overlook that, and can at least enjoy the boring parts for being more like every day life could be, then you might enjoy this book.
Posted by Lisa Mandina at 7:00 AM