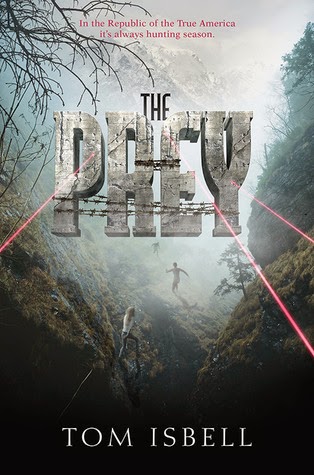 First thanks to Edelweiss and HarperTeen for allowing me to read an egalley of The Prey.  While it was a good read, and had some good parts, overall I had some issues with it.

There are two main characters, Book - a boy, an orphan who really has no name other than the number tattooed on his arm.  But all the boys in his camp have nicknames, his comes from the fact that he is always reading books.  He is a "less than" or a kid who was born with some kind of deformity due to the leftover radiation from the wars that have brought this world to where it is.  In fact all the orphans/boys at his camp are called less-thans.  At the beginning of the story he and his friends find another boy in the desert surrounding their camp, and they bring him back.  He seems to be pretty out of it from the heat and crossing the desert.  But he does whisper something into Book's ear, something that Book chooses not to share.  He whispers not to let them take him back to the camp.  But of course they do.  This boy, who is soon nicknamed Cat, comes from a better camp, in fact one where the boys become officers for the Republic, the government of this new world.  Cat shows Book that the graduation they all have when they turn 17 isn't a real thing.  They are sent out to be "prey" for rich hunters.  Cat runs away again, but soon comes back.  When he first runs away, Book is taken to another camp to help look for him, this is a girls' camp.  And this is where he first meets the other main character, Hope.

We met Hope at the beginning while she was on the run from the "Brown Shirts" or military/police of the time.  Her father is sick, and she and her twin sister are trying to stay hidden and help him in a cave.  He tells Hope that it would be safer for the two girls to separate once he dies, because the Brown Shirts that have been after them want them because they are twins.  When her sister Faith hears this, she takes off, thinking that their father wants only Hope to survive.  At first Hope is mad, so goes in the opposite direction. But soon she feels bad, knowing that Faith will never survive on her own, and goes after her.  Unfortunately they get caught and brought to the girls' camp where they are tattooed and soon the experiments begin.  The doctors here seem to be like the Nazi doctors in that they use twins in order to test things out.  Most of the girls in the camp have lost their twin due to the experiments.  And at first they all seem to be hateful that Hope and Faith are there.  Soon, after the experiments begin on them, they start being more accepted.  But Hope hears of a plan to exterminate all the girls in the camp.  Right about the same time that she meets Book.

Soon the two of them will work together to help each other, first to get the girls out of the camp, and then later to help Book and the other Less-thans that escape and try to make it to the next territory where they are sure things must be better.  Along the way they will have to get past mutant wolves, crazy people, a desert with no water, and people who blame the less-thans for their troubles, thanks to the propaganda from the government. And they must do all of this while staying ahead and out of sight of the Brown Shirts.

So, it is a good story, but there were a couple parts where I feel like things were just skipped over and all of a sudden there was a new story plot point.  I don't know how to explain them without giving away some parts, so I won't mention them.  So it was an okay read, but not anything that original really, or that spectacular.  If your TBR pile is as big as mine, you might put this one on the backburner for now.
Posted by Lisa Mandina at 8:45 PM