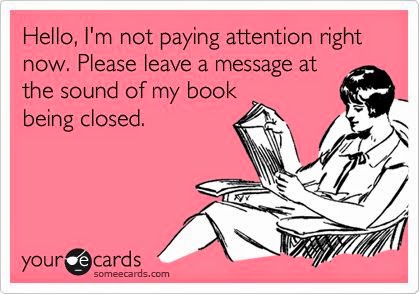 Well, things have led to me not getting my book finished in time to post a review today like I'd hoped, so I searched Thursday book memes online and found this one that Bookishly Boisterous hosts.  It sounded like an easy one for me to do today so that I can keep up with my goal of a post every day this year.  Basically it is just to allow you the blogger to post whatever random thoughts you might have for the day, related to books or not.  So, that's a good one for me today.

1.  Last night I went to an early showing of the movie The DUFF.  It's a book I've wanted to read for awhile, but just haven't gotten around to it yet.  The movie was really good.  It started out and I was a bit worried it might be kind of lame, but then it got pretty funny, and there was even a part where I just understood completely what the main character was going through and had tears streaming down my face.  I highly recommend seeing this one for a fun teen movie.  It touches on things like cyberbullying, and just being yourself.  There's a locker room scene that was hilarious, as well as a scene where the "Duff" is teaching the "Jock" how to kiss.  I still smile when I think of those parts.

2.  I really need to start exercising.  Several years ago I lost a ton of weight by walking, and also doing Weight Watchers.  Since then I've tried going back to WW, but they changed the program and now it really doesn't work for me.  There is a park I like to go walk at, and the weather has actually been pretty decent for January here, like in the 50s and 60s.  But on the days that I have had time to go walk, I've instead cleaned house, something I don't like to do anyway.  Or been lazy and said I didn't want to get dressed for the day.  All my clothes are too tight, and I refuse to buy any bigger sizes than the sizes I have.  So yeah.

3.  I joined eHarmony this week.  I should say rejoined, because years and years ago when it first came out I belonged for awhile.  It's so expensive though!  I'm going to try it without paying so that I can try not to be shallow about looks like I think is the problem when I try sites like Match.com.  So, wish me luck on that.

4.  I had to go back to working part time at my bookstore job.  Which don't get me wrong, if I have to work part time, it is the perfect place to work.  But last year this time I went seasonal.  And it was so nice to not have to go work anywhere else.  To be able to just go home and watch tv, read, etc.  I have to work tonight is why this is on my mind, because it means that I won't have time to read my book like I want to.

5.  I'm starting the editing process of the novel I wrote during NaNoWriMo last November.  I've gotten some good feedback from two people, one of them was my writing partner.

6.  I love YA Book Exhange, but.  The issue is that I can't trade with a lot of the people because I don't have anything new enough to trade with them for the newer ARCs.  And that makes me sad.  Especially when they got an ARC that they didn't want, or they get two of them.  Or it makes me jealous? Both?

7.  I'm so excited that this week it was announced that NKOTB would be touring again, and they're coming to my city in May!  American Express pre-sale tickets are tomorrow.  Hoping to get some good seats.  I always go with one of my cousins and now a friend of mine that I didn't know was a fan until last year.  And, the announcement that Jonathan Knight and his partner/boyfriend are going to be on the Amazing Race next season was exciting as well!

8.  I'm missing going to the movies as much as I used to.  I had a really good friend, whose mother worked for AMC corporate, and so she had free passes.  And we went almost every Friday, often seeing 2 movies at a time!  I've had to learn to think which movies do I really want to pay to go see in a theater, and which ones can I wait till I can get them at Redbox.