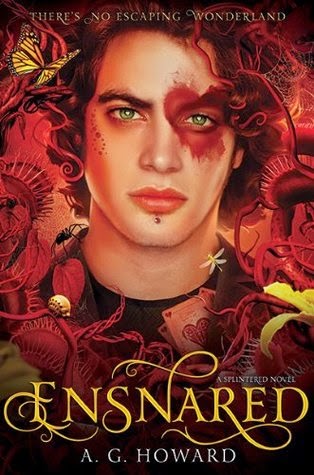 I got an ARC of this from trading through the YA Book Exchange with Jane from Much Ado About Books.  I didn't get around to reading it last weekend though, about a week after I got it.  But once I picked it up, it was all I could do to put it down in order to do things like sleep, work, drive, etc.  This review is going to be soooooo hard!  I loved it so much, but a lot of what I loved would be spoilers for other people, and I really don't want to ruin it for anyone.  So I'll do my best to be unspoilery.  Of course, if you haven't read the first two, I won't be able to help you with that, there will be things from those books.

We begin where the last one had left off.  Alyssa is on the train on her way to try to get the entrances to Wonderland opened back up.  Her dad has learned that all of the things that made her and her mother "crazy" are true.  And that at one time he was a part of all of it.  Alyssa's heart feels messed up thanks to when Red had been sharing her body.  Her mom is stuck in Wonderland, and Jeb and Morpheus are trapped in AnyElsewhere where they landed with Red.  There is an iron dome over AnyElsewhere that keeps magic from being used.  And Alyssa is so worried for Jeb, afraid that Morpheus either won't protect him, or will do something to keep Alyssa from ever getting to spend time with Jeb.  We learned in the last book that Alyssa and Morpheus's child will be what is needed to save Wonderland, to help with the imagination and dreams.  But Alyssa wants a life with Jeb as well.

Alyssa's father comes from a family that protects the two entrances of AnyElsewhere to keep things living there from getting out.  With her newly met Uncle, she and her father go in to try to save Jeb.  Only Jeb has changed.  Something about going into the world at the same time as Morpheus and Red has changed him, and he is cold to Alyssa.  He seems to be unable to forgive her.  While Morpheus has done his best to protect Jeb, Morpheus has lost his magic to Jeb it seems.  And along with that, he has told Jeb everything detail of the things that he and Alyssa have, making Jeb so unforgiving as he doesn't hear the whole truths, only what Morpheus chooses to tell him.

To save the world, they must capture Red, get through to Wonderland, and recreate all that has been destroyed.  But in the end everything will come with sacrifices. Some that may seem too great to survive, will in the end be just what is needed and even make their lives better in their own ways.

Can I just say, wow. The heartbreak, the sadness, the wonderful world, the beautiful imagery, the layer upon layer upon layer of story.  Things may turn out the way we want, but not in the way we think.  As I mentioned above, everyone has to give things up.  Even to a point, Morpheus.  One thing that I loved the most, I can't really even share, because I don't want to spoil that part about the ending for those of you who haven't read it yet!  And what is even more exciting is that the author posted today that there is a possibility of a follow up novella, here is the evidence from Twitter: 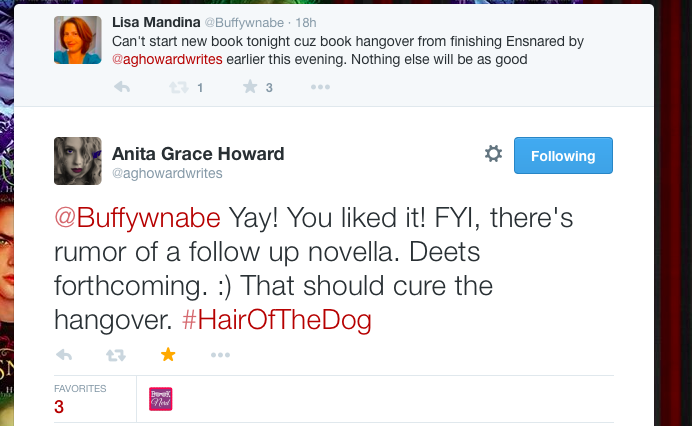 If I hadn't been at work on Wednesday when I saw this, there would have been some yelling and screaming going on!!  I need more of this world!  One thing that tells you how much I loved this, everyone knows that I never have time to re-read anything anymore.  But I want so much to go back and re-read all three of these books because I know I missed out on beautiful images from the land of Wonderland because I was in such a hurry to read and know what would happen.  The way the author writes is so wonderful, so beautiful, such an imaginative wonderful world.  Better even than the original stories that inspired her.
Posted by Lisa Mandina at 8:00 AM