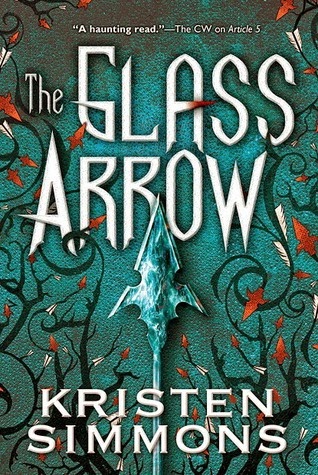 First, thanks to Edelweiss and Tor Teen for allowing me to read an e-galley of this title.  This is my first book by this author, even though I do really want to read the Article 5 series, I just haven't gotten a chance to pick them up yet. But now that I've read and really enjoyed this one, I'll have to make sure I get around to them sooner.  The cover and title of this make it sound more like a fantasy novel than a dystopian novel.  But reading the description of it, I knew I had to give it a try.  And it was very good.

The main character is Aya, or as she is called at "The Garden," Clover.  In this future world, women have become the slaves/property of the men.  This happened after women began to take over the world.  Now women live in towns, and at a certain time in their lives they are brought to be used to procreate.  And there is a problem, because of the way that most people now live off of food supplement pills instead of actual food.  Except for those women able to escape and live in the wild.  Or the very rich, they get to have real food.  The problem is that the pills have made it so many of the women are unable to have children.  And so the men want to go steal all the women from the outer lying cities or even those in the wilderness.  They go to The Garden where they will be fixed up with special treatments and then taught how to please a man.  This might sound great, but once they produce a child, they are then sent back a lot and auctioned off again.  Especially if they only produce females.  Aya was kidnapped in the wild, where her mother had taken her and her aunt and cousins to keep them safe.  The whole time Aya is in the Garden, she does her best to not go to auction.  Getting in fights, trying to escape, etc.  She makes a friend of a Driver, a group/race of people who cannot talk.  He tries to help her escape, but to no avail.  She is finally sent to an auction, where again she does her best to not be purchased.  What happens next only throws another wrench into her plan/desire to get away, back to the wilds and save her cousins.

There were 4 main parts to this book.  And it was definitely well split up into each section. This is a standalone, there will be no series.  And it does end well enough for that.  While not everything is all tied up in a pretty little bow, it is tied up quite perfectly.  I highly recommend this book. And it was nice to have a standalone book for a change.  I read this on the day of the National Readathon, read it all in one day.
Posted by Lisa Mandina at 8:00 AM