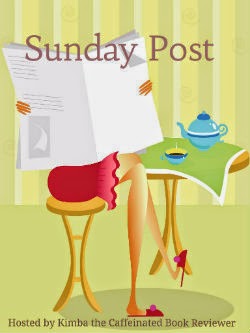 The Sunday Post is a weekly meme hosted  @ Caffeinated Book Reviewer. It’s a chance to share news~ A post to recap the past week on your blog, showcase books and things we have received and share news about what is coming up on our blog for the week ahead. See rules here: Sunday Post Meme. Now, I don't have a lot that actually was posted to my blog last week to share, but I was at BEA, so I'll talk about that!
In fact, I only had one post last week, a book review:  Divided (Dualed #2) by Elsie Chapman.  Then I thought I'd take Tuesday and Wednesday off, and be prepared to blog after each day of BEA starting on Thursday.  Well, that didn't happen.  I'm staying with my sister in NYC, which meant free place to stay for BEA.  But, she really wants to be her idea of a great host, which is making sure I'm busy and seeing and doing lots of new things. Which also means that I didn't get much time to just sit and get on my computer to blog.  Or even get on Facebook and play Farm Heroes Saga or Candy Crush.  :-)  And, I was so exhausted from standing on the concrete floors in line at BEA, and carrying the heavy books around,. that when I did finally get back to the apartment at night, I was just ready to fall into bed.  Honestly, I probably only read about 10-20 pages of any books the whole time either.  Craziness.  I was ready for a review as well, because I finished Dark Metropolis by Jaclyn Dolamore on the day I traveled, Wednesday.  So I'll be sharing a review of that tomorrow.  I also didn't get to meet all the bloggers I'd hoped to meet, but did at least meet some new ones!

Thursday, Day 1 of BEA:  I guess I wasn't as planned as I'd hoped, because I didn't get to meet everyone that I wanted, and definitely didn't get all the books I wanted.  I don't think I'll share all the photos today for the authors I met.  I'll probably do some posts over the next couple weeks where I share each day separately.  Highlights of Thursday though, included meeting Neal Patrick Harris, Jeffrey Deaver, BJ Novak, Douglas Preston, and Gregory Maguire.  I also saw Billy Idol and Jane Lynch from afar.  BJ Novak was the coolest, leaned in with me for a selfie and everything! 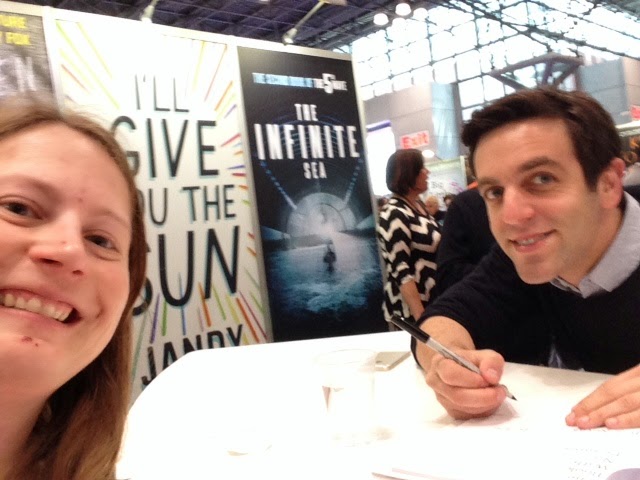 Friday, Day 2 of BEA:  This day I was definitely well planned, and pretty much got to do everything I wanted, with a few minor changes. Again, I wasn't able to get all the books I'd hoped for, but was able to get some.  I noticed this year as well that most of the people in the publisher's booths were much nicer than when I attended BEA two years ago.  Highlights of Friday include: running into and finally getting a picture with author Michelle Madow; meeting Marie Lu, Kathy Reichs, Judy Schachner, Michael Grant, Seth Grahame-Smith, and Stan Lee.  I got to meet and talk to Jonathan Maberry again, which was really cool.  Turns out that Rot and Ruin may be a movie, as well as the novellas that go with the series may all be put together in one print book, which means the one that I helped name, Tooth and Nail, will be in print, and my name in the Thank You part!!  Also, Michael Grant was like the coolest!  I was telling him that I loved the Gone series, even better than Under the Dome by Stephen King, which was really saying something because I am a huge Stephen King fan. And he said he was going to tell on me to Stephen King.  Below is a picture of me with Michelle Madow.  I met her in line the very first day of BEA 2012, and recognized her as an author, but didn't even think to get a picture with her.  So, I had just tweeted that I needed to find hr on Friday, and the next thing I know, I see her walking down the aisle I was waiting in line!  I immediately got her attention and got a picture with her!  (I also sneaked her into the line with me to see Becca Fitzpatrick.) 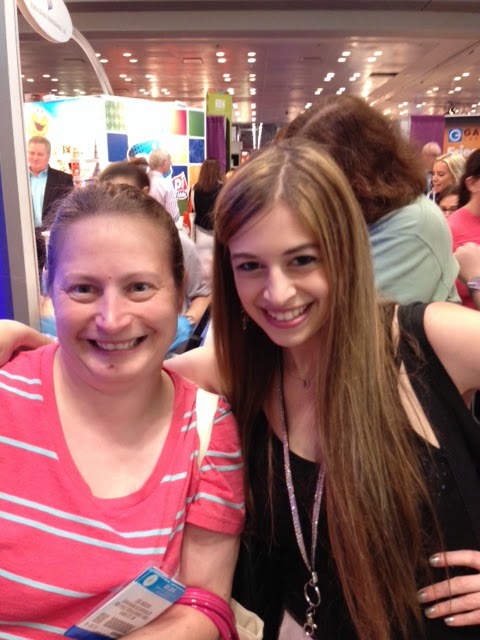 Saturday, Day 3 of BEA:  This day I tried and thought I was well planned.  Unfortunately this was also Book Con day, the day of like 6000 other people!!!!  So, basically, lots of wrenches thrown into all my plans.  Plus, remember my mention of my sister's being a good host earlier? Well, that changed a plan or two this day because of having to leave early to go to an event.  So my book haul this day was tiny.  And, there was a book I had to purchase, but that I could have gotten for free on Friday!  But I made the choice on Friday to put this author first thing on Saturday so that I could get another author on Friday.  So I still got to meet both authors, just had to pay for a finished copy of a book on Saturday.  Highlights of Saturday:  meeting AG Howard (had to buy my copy of Unhinged, but I would have done that eventually if I didn't get to meet her, so it's okay.), Sophie Littlefield, Matt de la Pena, and seeing Maggie Stiefvater and getting to show her the biography book of hers that my photo from BEA 2012 with her is in.  And of course she remembers me.  I guess I bug her too much. 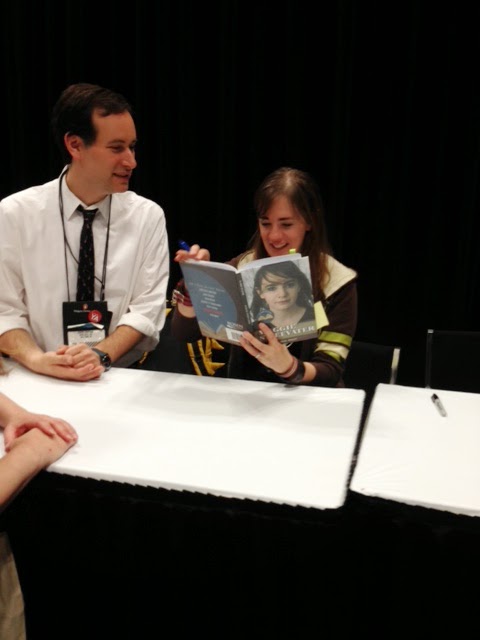 This week on my blog:

Tomorrow will be my review of Dark Metropolis, Wednesday I'll be traveling back to Kansas City, so not sure how much I'll actually get blogged.  Then I should have a review of Hungry by HA Swain, and possible a review of The Strange Maid by Tessa Gratton.  Not sure what else I'll fit in this week.  Probably not a Stacking the Shelves, but maybe start my individual day BEA posts.  Oh yeah, I'll be going to the Live with Kelly and Michael show tomorrow morning, so maybe I'll have something to share from that. 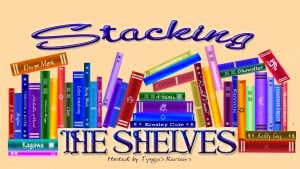 Stacking the Shelves is hosted by Tynga's Reviews.  It is a way for us to share the new books we have collected.  I'm going to share three photos, one for each day.  I'll try to give more detail about them when I do individual day posts later on. 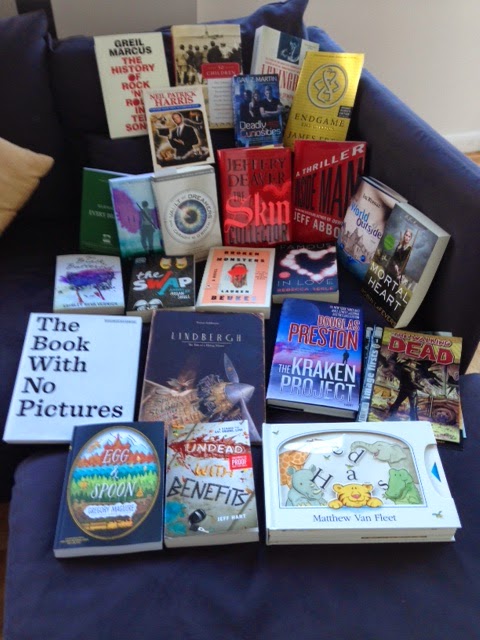 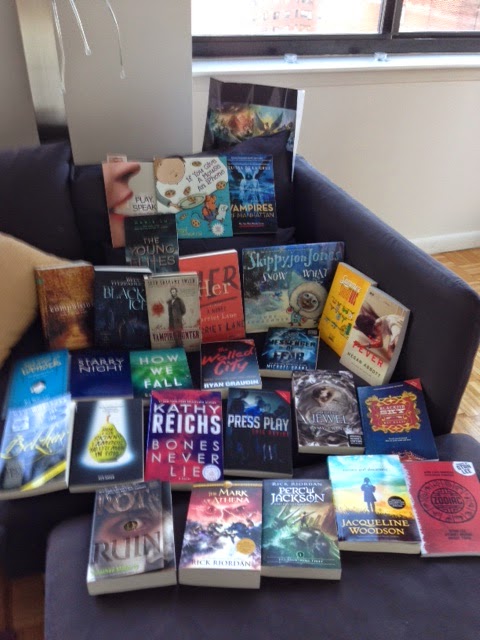 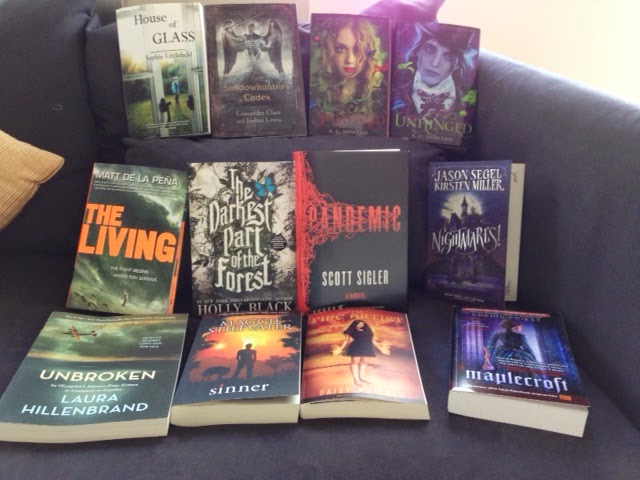 Bags and other extras from BEA: 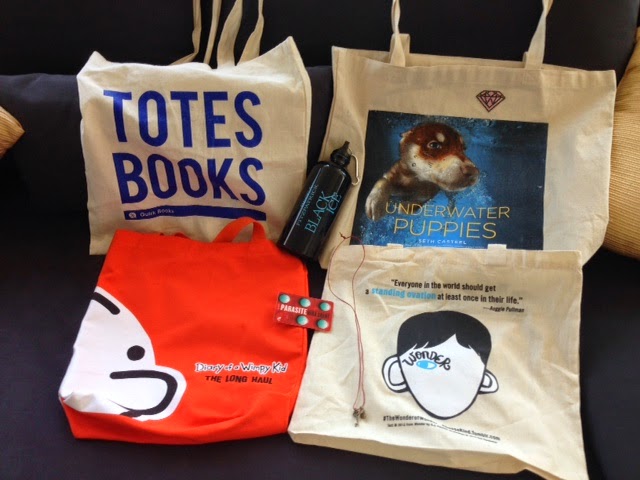 I actually went back and got an extra "Totes Books" bag for my sister because she really liked it. 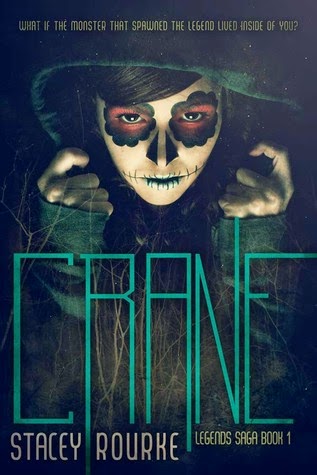 And that is the haul for the week.  I'm off to the post office now to mail home my books that I got at BEA since I won't have enough room in the suitcase for them.  Look for a review tomorrow!  I feel such a relief to finally have a post done!  It's been a whole week since I last blogged and I was having major withdrawals.