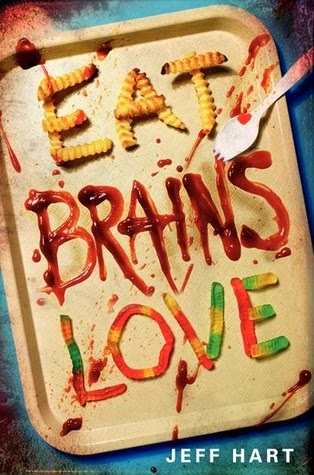 This is a book I added to my library request list when I got back from BEA a few weeks ago.  I was lucky enough to get to meet the author and get a copy of the second book, Undead with Benefits, so I figured I'd better go ahead and read the first one.  It also came in right before I was going to have surgery.  So I picked it up, and it was my next physical book read after I finished another e-galley.  This was definitely a fun zombie read.  And I guess I am loving that during my recovery time, I'm able to read about a book a day, which is what most books are meant to be read in. Well one sitting, but that's about impossible in life these days.

There are 3 main characters in this book.  Jake, who is kind of a loser type of guy, or maybe you'd just call him a stoner.  He's so out of it, that when the school takes their standardized test that is supposed to help them figure out what career they would be good at, he ends up not having any show up that he'd excel at.  Amanda is the next one. She is "the" beautiful, popular girl.  And then Cass, a girl who is a psychic, and the secret government organization, NCD, Necrotic Control Division, uses her to help find out who the zombies are and where they've gone.  You see there are zombies out there. But the government is able to catch and kill them before they get too far.  Usually.  It is a disease, but not like when you get bit you turn.  Not the normal zombie disease.  In fact it seems to be passed on like an STD in this book.  And it is kind of weird.  It seems they don't just change into brain eating, slow moving zombies.  Once they've eaten, humans, or maybe other animals occasionally, they heal and turn back almost to normal.  So when Cass gets into Jake's thoughts, she sees a normal teenage boy.  One that she thinks she could have been friends with.  Maybe even develops a bit of a crush on as she keeps going into his thoughts.  But on the road, Jake and Amanda may be developing a bit of a romance themselves.  They see that the high school where they kind of went crazy and ate there friends has now been named a school shooting site.  And then they see that supposedly they've been captured?  Which totally isn't true as they are still on the run.  Cass finds out this organization she's been a part of may not be all as good as she thinks it is.  The main boss, a scary nerdy guy wearing a bow-tie, seems to have some alternative plans for what to do with these zombies.  And it seems he has his own telepathic powers, and they are strong, and he can use them to basically do what he wants.

A good story, you root for the zombies, and you also see a government secret, definitely one for fans of The X-Files, which I definitely am.  And the humor, the sarcasm of the characters gave me some laugh out loud bits.  One at the very end, I have to describe.  Jake and Amanda were hiding in an abandoned farm house, one that seemed haunted to Jake. At this point Cass has decided to go ahead and help the NCD catch them so she can go back to her old life and forget all this.  Jake and Amanda are starting to take their relationship into a more physical stage when Cass's crew catches up to them.  The front door slams open with a bang, and Jake can see a huge silhouette in the doorway, and he shouts:  "Angry ghost farmer!".  Okay, maybe call it out of contest where I've talked about it, but it still cracks me up.  That's my kind of silly humor I guess.  This could be a fun movie I think.  If they did it right, with both the right amount of blood and gore and seriousness, but also the right amount and kind of in your face humor, we know this is crazy.  Just like the book does.

Can't wait till I get to my copy of the 2nd one from BEA now to see what happens next.
Posted by Lisa Mandina at 9:00 AM