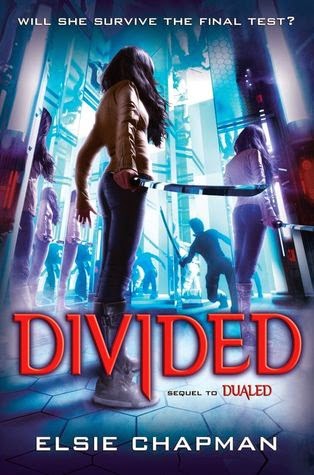 First, thanks to Edelweiss and Random House for Young Readers for allowing me to read an e-galley of this.  I read the first book, Dualed, back in the summer of 2012.   So it had been awhile since I'd read it. But I remembered the main points of the story.

In this futuristic society, people have become sterile.  They are able to make babies, and what they do is make two of the same genetics, twins basically, but set them with two different families. At a certain point they are called or given the the order where they must find and kill their "Alt" or twin.  Whichever survives is the strongest, and therefore the best to survive and help protect their city from the outside world that wants to come in and take over.

West Grayer is still the main character, if you didn't read the first one, stop now.  She survived after killing her own Alt, which made her a complete.  Now she is helping train other "idles" so that they can be prepared the day they are called to fight their own Alts.  Now in the last book, in order to prepare to kill her own Alt, she became a Striker for awhile.  Killng other people's alts for them.  She has given it up, as her boyfriend, Chord, asked her to. And because she doesn't want to kill anymore.  But one day she is contacted by someone high up on the board. And they want her to kill 3 more alts.  Children of board members, who even though they should be way better prepared because of all the benefits they have, their parents just want to make sure they are able to become completes.  West decides to do it, but only after getting a chance to get several things she wants.  She is promised that when they day comes for her to have children, they will not create alts for her children, so they will never have to kill to live.  And the other is to remove the tattoos she has that mark her as once being a Striker.

There is a new type of weapon available as well.  It can make the death quick and painless, if you hit in the exact spot it is meant for.  If you hit them in the eye, it will remove their ID mark, thereby turning them into incompletes, but also saving their alt, and keeping them from dying.  So West decides to do this. She's saved the lives of two of the Idles, but when she comes to the 3rd, he looks familiar, because he is her brother's alt.  Which means that he is complete, because her brother is dead.  Now she knows something is up.  And from there, it all goes downhill.  The controversy and reasoning behind this deal becomes known through bits and pieces, and more and more danger shows up in West's way.

I liked this one.  It had a lot of twists and turns, and while we learned quite a bit of background information, I really think there needs to be a 3rd book, because I have a LOT more questions about what is going on, and what could change in this world.
Posted by Lisa Mandina at 9:00 AM