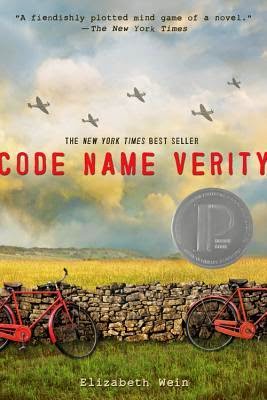 This is the book I handed out on World Book Night.  I actually hadn't read it yet, so I kept one of those copies for myself, which I will now donate to the high school library where I work part time.  I knew it had won awards, and was about World War II, but had never really had the urgent desire to pick it up and read it right away.  But I thought maybe I'd better start it if I was going to be handing it out, and so started it before that night.  I just finished last night though, as it was kind of my 2nd book I was reading with other main ones.

I would have to say it was a pretty original story.  It is about a girl who is an English spy in the war.  And she has been caught.  And after much torture, she gives in and swears to give up information.  The way she ends up doing it is by telling a story.  But not just telling it, writing it down.  She tells what she knows, but puts it into a story form.  At first in the story she doesn't say who she is, it is not really told in first person.  But she talks about two girls who become friends after one single event of helping a pilot land, a German pilot that is.  The girl, who calls herself Queenie, or that's what she had been nicknamed at the base she'd worked at, is actually Scottish, and indignantly corrects anyone who calls her British.  She must deal with an SS agent, Von Linden, and his secretary, Engel, who do punish her when she tries to drift off topic in her writing.  And when they show her a picture of the burnt plane, the one she had parachuted out of, she knows it is only a matter of time before they kill her.

I must say towards the end, when she had finished her story, I wasn't sure what in the world would happen next.  But there was a twist, and then I thought there would be the happy ending that you hoped for as you read it.  But alas, it is still a WWII book, and so there were few happy endings in that time.  Still a great read, and I loved the twists at the end.

Now at the top I've posted the cover of the edition of the book that I have.  However, I found this cover on Goodreads, and I really like it better.  I think it would have drawn my attention had I seen this cover first. 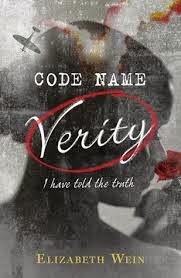