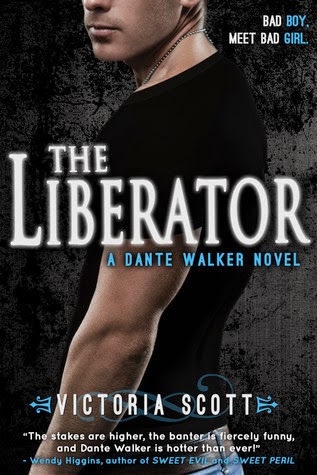 I was lucky enough to win a copy of this from Knite Writes in the Leap Into Books Giveaway.  And I was very excited to get it right in time for the 3rd book to be coming out.  I got an e-galley of the 3rd one, The Warrior, which of course I will be reading starting right now!

Dante is back.  But he's not quite his same old bad boy self.  Even though he seems to be doing anything and everything he can to prove that he still is a bad boy.  Except for when it comes to his girlfriend Charlie.  You see he gave up his status of Collector, someone who took souls for you know who, Lucifer.  He gave it up to save her, and fortunately, the Big Guy, as Dante calls him, let him become a Liberator, like Valery.  His best friend Max is still technically a Collector, although he isn't really working for that side anymore.  He's kind of helping Dante, hiding from the other Collectors, and of course spending time with Valery.  Dante has been told in order to prove to the Big Guy that he really has changed his ways he must complete a mission.  That mission is to liberate a girl named Aspen.  So, after fighting it as long as he can, he gives in and goes to help.  He finds that the credit card he has now is not the Black American Express he had as a Collector, but a Discover card.  And his rental car?  A neon green economy car.  As he drives to Colorado to start liberating, he is basically almost run off the road, only saving himself by pulling into the actual driveway of the very person he's looking for.  And perfect timing as she comes running out the door of her home, and jumps into his car to get out and away from her father.  He drives her first to her friend Lincoln's house.  From there they go meet these two who seem to be kind of wild.  As Dante talks to Lincoln, it seems that he might have some work liberating Aspen.  She seems determined to be as bad a girl as Dante used to be a bad boy.  According to her best friend Lincoln, these two new people she's been hanging out have been kind of egging her on.

Being away from Charlie is hard too.  It seems she has also got some new friends back in town.  And the pictures and texts he's getting from both Charlie, and her best friend Annabelle, seem like she's also starting to get a little wild.  Soon Charlie shows up at Aspen's fancy cabin, and everyone gets connected in what is going on.  There are some new bad guys in town it seems, and they're humans, soulless, but human still.

I won't go on too much more, just know that there is a trip to Hell, a Liberator "training camp", and Dante may finally learn how to get wings like Rector and Kraven.  And there is even a surprising appearance of Blue, one of Charlie's best friends who died protecting her in the first book.

It was a good story, and definitely lots of excitement and action.  Unfortunately I just didn't feel the same need to read straight through this one like I did with the first one.  I think maybe Dante was a bit too whiny for me in this one.  It's understandable, he had some things to deal with, but it did make him a bit less lovable.  However, I will say that I've already started the 3rd one, and I'm feeling more of the old Dante so far.  So I'm guessing he's going to be back and in the way I first loved him for this 3rd book.
Posted by Lisa Mandina at 7:00 PM