The Selection by Kiera Cass 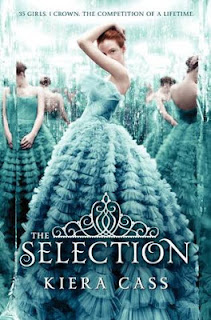 I've been interested in reading this book for a long time.  Of course it has such a pretty cover, so that pulled me in at first.  Then I heard lots of great reviews of it.  I guess there are negative ones out there, but I didn't see them.  And I don't plan to go look for them either!  I have to say that I loved this book!  As I've seen it posted before, this is basically The Hunger Games meets The Bachelor.  In a good way though.
This is definitely dystopian.  This society has castes, that are numbered, and if you are in a caste, it is almost impossible to get out of it.  The main character is America Singer, and she is in the level 5 caste, which is for musicians and artists.  This society has also condensed all holidays into two or three a year, which makes it harder for this caste to make money because about the only time they are hired is to perform at holiday events or make gifts for holidays.  Whenever the current prince gets to a certain age, the way that they find a wife for him is through the selection.  35 girls are chosen from around the country, in all levels of the castes, to compete to win his heart.  In fact they go live at the palace and get to know him, in a very Bachelor tv show  style.
America doesn't want to go though, she is in love with a boy from her home, he is a level below her, but she loves him just the same, and he seems to love her.  But her mother wants her to apply when she gets the invitation.  Her mother of course hopes to see her daughter become the next princess.  Not to mention that while she is there her family will be compensated.  And it turns out that she will automatically be higher level in the castes even if she isn't chosen.  When America talks to her boyfriend, Aspen, he wants her to go as well.  She's shocked at first, but he says he doesn't want her to not try something because of him.  And then, one night, he breaks up with her  when he feels she's kind of taken his manliness in a way, because he wants to provide for her, not have her give him things because she is a higher caste.  America is upset because based on something Aspen's mother had said, she had been sure he wanted to propose to her.  So they end it, and America ends up getting selected to go.  When she gets to the palace, she gets a makeover, so this reminded me of The Hunger Games, because like Katniss she doesn't want to be made to look different.  And this seems to work for her.  There are all kinds of rules about how they must act and how they can interact with the Prince.  The first night there, America gets claustrophobic, but they're not allowed outside without guards because of rebels attacking.  So she runs out, and finally while the guards don't want to let her out, Prince Maxon shows up and allows her to go.  She yells at him, and basically does nothing to endear herself to him.  To me, I think Maxon is kind of wimpy seeming at first.  He gets better, and you like him more as you go on.  But there is always that little doubt in your head, like I'm sure for the girls on The Bachelor, that you don't know what is really going on with him and the other girls.  But he seems to like America, even when she can't seem to like him back, or at least not that way.
We don't know a lot about the rebels, and that makes this more of a dystopian book to me in a way, because we don't exactly know what they want, and what is going on is supposed to be what people thought was best.  So I'm hoping to learn more in the 2nd book about what all happened to get the society to where it is now, and how that will relate to America and Aspen, and even Prince Maxon.
I've had a great time the last 2 days at the Romantic Times Convention taking place here in my hometown, and last night I was able to get an autographed copy of the book, which will replace the copy I purchased with the gift card I won from The Reader's Den.  Now I loaned my autographed copy to my sister, so I can't show you the autograph, and unfortunately I didn't get my picture taken with her today at the book fair, I forgot to go back and get it I think.  Darn it!
Posted by Lisa Mandina at 9:57 PM

Email ThisBlogThis!Share to TwitterShare to FacebookShare to Pinterest
Labels: Kiera Cass, RT Convention 2013, The Bachelor, The Hunger Games, The Reader's Den, The Selection