Breath (Riders of the Apocalypse #4) by Jackie Morse Kessler I had to buy this last month when it came out just so that I could get it autographed by the author the first weekend of May at the RT Convention.  I could have bought it at the convention, but by purchasing it from the bookstore where I work, I got it at 30% off, whereas at the convention it would have been full price, and I'm a bit broke at the moment.  Although, if there was any book that was worth buying at the full price, which isn't bad, only $8.99, it is this whole series.  The reason for that is because a portion of the proceeds go to charity, To Write Love on Her Arms.
I would say this is a pretty fitting conclusion to the series.  Although truly, I would love to have some more books written, about the earlier riders, before the ones we've learned about from this series.  Not to spoil it, but in each of the prior books, the teen that was the main character ended up becoming the rider that fit what their issues were.  Famine for the eating disorder, War for the girl who had a lot of rage and took it out on herself by cutting, and Pestilence was the boy that was bullied and was taking care of his grandfather with Alzheimer's.  In this book we get to learn about Death, the rider who has pretty much been the same throughout the series.  Although we know that his form will change throughout history, kind of based on someone from that time period.  We learn how Death "became" Death.  And in this book, Death is tired, and feeling like he's ready to be done, suicidal if you will.  We learn about Death through another teenager, this time his name is Xander.  I won't give away any spoilers, but it wasn't a easily guessed story.  What happens, and how Xander fits in with Death and the rest of the Riders is a new twist and a welcome one.
Really a very enjoyable book.  While I was a little lost for awhile about why Xander kept having memory losses, and why Death might feel the way he did, it all wrapped up so neatly!  And with a really unique new take on the story of the Riders, etc.  I highly recommend you read the whole series.  While the first 3 really got to the heart of teen issues, this one was just a great look at the whole story of the Riders and Death.  And like I said, the price of the books is so reasonable, $8.99, and the fact that proceeds from that go to charity, is just incredible.
Great, great, great story!  And I'll have to include my picture with the author from the RT Convention! 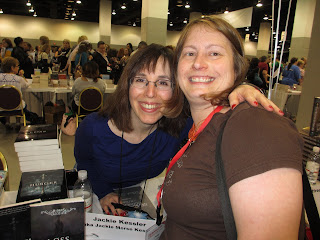