This week my Stacking the Shelves post hosted by Tynga's Reviews will be not only about all the books I got the past two days at the Romantic Times Convention, but also some stories about the convention itself.  I'll share the books first, then the stories after. 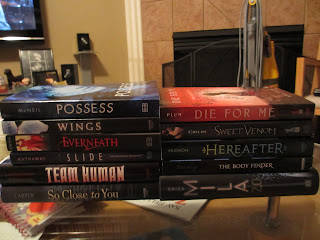 The picture above shows the books I was shocked and delighted to get for free at the Red Slipper Party put on by Avon Books.  From what I'd heard about past conventions, you were limited to how many free books you could get in different events like this.  But, it wasn't that way!  Here's what you see in the picture:

Possess by Gretchen McNeil, Wings by Aprilynne Pike, Everneath by Brodi Ashton, Slide by Jill Hathaway, Team Human by Sarah Rees Brennan and Justine Larbalestier, So Close to You by Rachel Carter, Die for Me by Amy Plum, Sweet Venom by Tera Lynn Childs, Hereafter by Tara Hudson, The Body Finder by Kimberly Derting, and Mila 2.0 by Debra Driza.

I actually got a few more books than  you see here, they were ones I'd already read, so didn't put them in the picture, they were:  The Selection by Kiera Cass, Eve by Anna Carey, Invisible Sun by David Macinnis Gill, and not sure why I didn't put it in the picture but a new one by Melissa Marr:  The Arrivals. 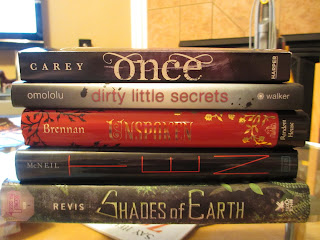 This next picture shows the books that I bought at the Giant Book Fair on Saturday morning.  I had hoped to buy a few, 5 was my limit, but I wish more of these had been available in paperback.  Once by Anna Carey was in paperback, and I had to buy it because I loved Eve, and have been waiting to read on.  Dirty Little Secrets by CJ Omololu was one I planned to buy after hearing her talk about it in a panel on Friday, but I had expected it to be in paper back as well.  Now, I totally fell in love with Sarah Rees Brennan during all the panels I saw her during the convention, and I had already been a fan due to getting to read Unspoken as an egalley from Netgalley a while back.  So, I gave in and bought the book, even though it was hardcover.  Plus, she gave me a necklace like the one in the book, so how could I not?  Ten by Gretchen McNeil was the one I'd really wanted a lot, and while I had wanted to read Possession that I got for free the night before, I gave in and bought this too.  And finally, Shades of Earth by Beth Revis.  The 2nd book in the series, A Million Suns, left off with such a cliffhanger I couldn't wait to read this.  But, I'd been trying to win it so I wouldn't have to buy it.  I gave in and bought it.  So I stuck to my 5 book rule, but price-wise, it wasn't the paperback price I'd hoped for. 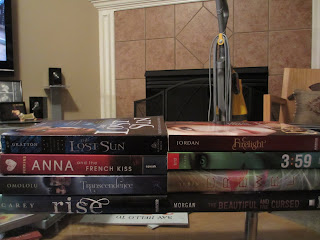 I need to crop my pictures next time, sorry about the vacuum cleaner you see in the back.  These are the books that I got at the Teen Day Party Saturday night.  At first didn't think I'd get any because it was supposed to be "only" for the teens.  And maybe if anything was left over, the adults could have some, well, soon that changed, and we got to get some too!  The ones you see in the picture above are Lost Sun by Tessa Gratton, and I've been a fan of hers with her Blood Journals series, so am excited to see something new by her, even if it's not in the same series.  Then Anna and the French Kiss by Stephanie Perkins.  I've heard so much about this, but it doesn't seem my kind of book, but for free, well, I guess I can give it a try this summer.  Transcendence by CJ Omololu is one I've already read, and loved, and if you remember my posts from BEA last summer, it was one I'd really wanted, and I was kind of given a raw deal on getting a copy of it, which made me irritated.  Not to the author, but to the publisher.  So I was very excited to get a copy of it Saturday!  And then I now have all the books in the Eve series by Anna Carey because I got the final book, Rise!  One of the teens sitting at the table we were at gave it to me, so that was very nice!  I also got a copy of Firelight by Sophie Jordan, I figured I would give it a shot as I'd heard such great things about it. And if it doesn't turn out to be my favorite, it can be on my shelf for students at school, or I can have a giveaway here for it.  The one book that was sought after the most I think last night, and I felt a little bad because I wouldn't trade with a teen for it (because I wanted it!) was an ARC of 3:59 Gretchen McNeil.  Another book I've been curious about for awhile was Crewel by Gennifer Albin, so I picked that up.  And finally, The Beautiful and the Cursed by Page Morgan.  I have been interested in reading more gargoyle stories and this seems as if it is one.  I also got a paperback copy of Across the Universe by Beth Revis that I can leave in my classroom for my students to read.

It was soooooo awesome!  I recommend if you ever get the chance, definitely go to this convention!  If you're like me and are a YA fan, just choose to go to the Teen day, and possibly the day before like I did, where there were a lot of teen authors there.  I also got books I already had signed while I was there, got to meet Veronica Roth, and several other authors.  Authors I saw but didn't buy or get free books from were:  Carrie Ryan, Victoria Scott, Margaret Stohl and Kami Garcia, Nancy Holder, Heather Brewer, and Ally Carter.
I also got to meet some great fellow book bloggers who were attending, and I don't know about you guys, but meeting fellow bloggers is almost as cool as meeting favorite authors!!  I got to meet The Book Nympho,  The Jeep Diva, The Book Savvy Babe, Kelly from Demon Lover's Books and More, The Bawdy Book Blog, Carmel from Rabid Reads, and Amber I from AwesomeSauce Book Club, and I know I'm forgetting someone!  I met up with them for dinner Wednesday night, even though I wasn't attending until Friday.  And then I ran into them on Friday and Saturday throughout the day as we passed on our way to panels and the book fair, etc.
Posted by Lisa Mandina at 11:55 AM