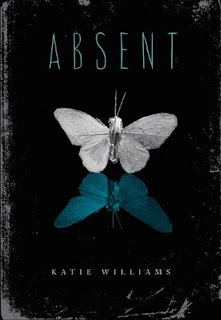 First I must say thank you to Chronicle Books and Edelweiss for allowing me to read an e-galley of this book.
This was a good ghost story.  The main character is Paige, who has recently died from falling off the roof of her school.  She wakes up and can't leave the school grounds, in fact, the minute she tries to cross the line that marks the end of the school property, she is immediately back at the spot where she died, on the roof of the school.  She is not alone though, while no one seems to know she is there, that is no one living, there are two other teen ghosts, Evan and Brooke.  Paige knows Brooke, she died of a drug overdose at the school earlier in the year.  In fact, Paige's "secret" boyfriend, Lucas, was the one who found Brooke.  Evan on the other hand, has been there longer, they don't know who he is, and they can tell from his clothes that it was a past time.  While all day Evan goes to class, especially to the art teacher, Mr. Fisk's class, Brooke acts like the sullen stoner type girl she was in real life, Paige walks around and hears people say that she jumped.  But Paige had no reason to jump, and from what she remembers, she fell.  Soon Paige figures out that when people are thinking about her, she can possess their bodies, at least until they try to leave school property.  And she is going to change that horrible gossip.  And not only that, her best friend Usha seems to believe it and be mad at her!  Paige is so upset when she hears that Usha doesn't want to paint a memorial mural, especially when she figures out that the more people who see the mural, the more people will think about her, and the more she can possess people and try to change their minds.
While jumping into different people and trying over and over to change this gossip, Paige learns things, things that may explain a few more almost deadly injuries that occur to kids in the school.  She also goes and jumps in the body of the gossip girl that she feels started the lies, Kelsey, one of the popular girls.  She hopes if she gets her to take the thing back, people will believe, but as soon as she's out of Kelsey's body, she tells everyone she doesn't know why she said those things.  Paige is so mad, she tries to humiliate Kelsey by having her ask out a stoner, loser boy, one that seems to have had a thing for Paige.  Turns out that Kelsey and the boy, Wes, may get along better, and Paige may really have done her a favor.  We soon find out that maybe Paige's death wasn't an accident, was it something to do with Lucas, who seemed to be using her?  Did she really jump?  Or, well, I won't give it away, I'll let you read and find out for yourself!
Posted by Lisa Mandina at 12:00 PM