After: Nineteen Stories of Apocalypse and Dystopia edited by Ellen Datlow and Terri Windling 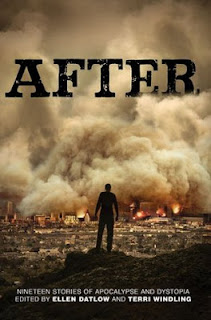 This is an ARC I received last summer at BEA, and I got to meet Ellen Datlow, one of the editors! 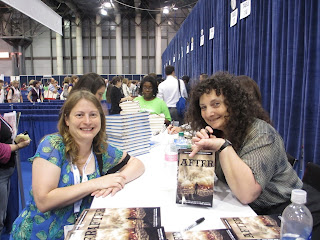 I started reading it in February, put it in my master bathroom, for when I took bubble baths.  And then I finished the last few stories on Saturday finally.  It's not that it was bad, it just was only for reading at certain times.  Actually there were many stories I did like, and many that were okay, and a few that I didn't like.  These are stories basically told to show what happens right after the big event that causes the dystopian or apocalyptic stories that we read.  I guess it makes sense that stories by authors I'd already read and loved would be some of my favorites.  To make this a positive review, I'm going to talk about a few of my favorites in this anthology.

First is After the Cure by Carrie Ryan.  Ryan's books are zombie stories, The Forest of Hands and Teeth, The Dead Tossed Waves, The Dark and Hollow Places.  And this story takes place after they figure a cure for the zombies, so I would assume after the other books maybe?  It is the story of a girl who was cured.  She comes back and they give her father's house house, which is located outside of town.  That's a good thing, as people are still not trusting of the cured.  For example, school.  She's still about 16, so when she goes back to high school, she is put in segregated classes along with the other "cured".  We get a look into what caused it, as the main character sees on tv video footage of it as it all began.  She does have a boy named James who befriends her, he knew her before.  He's one of few that give her a chance.  All alone in her cabin in the woods, she can feel the uncured when they run around at night, and she has the strong urge to join them.  It's about her struggle with that, fitting in, and how she decides to deal with those urges and move on with her "normal" life.  I got to meet Carrie Ryan at Romantic Times Convention this past weekend! 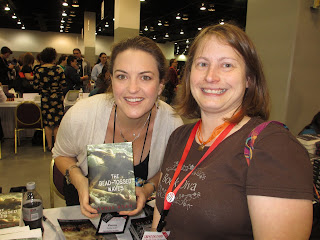 My second favorite was The Other Elder by Beth Revis.  She is the author of the Across the Universe series.  I liked this one too as it gave us a bit of background on the Elders from the stories.  We learn even more about how they are raised, and more about what life is like for the Feeder level.  They talk about the rules the Elder must follow, and we see when one Eldest leaves, and an Elder takes his place.  This Elder sees video of what the ship was like before the Feeder level people became the way they are as we learn in the series.  When I got to meet Beth Revis at the RT Convention this past weekend, I asked her what I wondered the whole time I read this story, is the Elder in this the one in the full length novels?  And she wouldn't tell me!  Such a (wonderfully) maddening author! 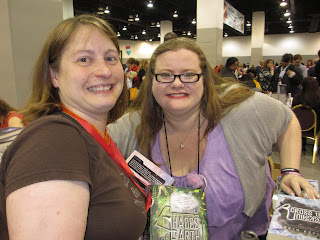 The third story that really stood out to me was Faint Heart by Sarah Rees Brennan.  This was a story about a dystopian society, that in order to prevent the crime and violence, they must give the young, angry, disadvantaged men who were the cause of these things something to fight for, and eliminate the ones that didn't win.  So they had a bit of a real Survivor/minotaur and the maze task to complete.  And what did they win?  Why they would win the hand of the most beautiful woman in the kingdom, the princess.  How did they know she was the most beautiful?  Well, they created her.  All unmarried men must compete to win her hand, unless they were able to be pardoned somehow, usually the upper level men.  And so every time it was time to have a new princess, they created the exact same woman, again and again.  I loved this story, and while we don't really know who will win her, mainly because she decided to fight for herself to be free, it left you hanging, but in a good way!  I'd love the author to keep writing this one.  I also got to meet Sarah Rees Brennan at the convention, and I just fell in love with her!  Besides her Irish accent, my favorite accent in the whole world, she was just such a perky, funny person. 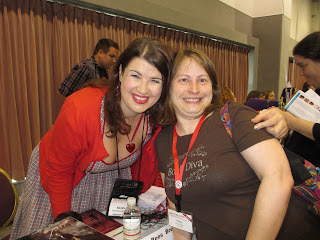 The last story that I really liked and am going to talk about is Rust With Wings by Steven Gould.  I really liked one of his novels called Wildside.  This is a very sci-fi story.  We don't know exactly where they come from, no real background given.  But there are bugs that eat metal.  Any metal, and just destroy it, cars, buildings, even metal inside people's bodies, pacemakers, fillings, braces, etc.  The family is trying to escape them, and must figure a way to get away and even to hide the father who has a pacemaker I believe.  I liked this story, and would love to read more of it.  What's weird is that the bugs are staying in the southwest area of America, for some reason they don't travel outside of that area.  So again, lots of questions and things that could definitely make for a longer story.

I won't list the ones that I didn't like, I'll leave you to decide which ones you like on your own!
Posted by Lisa Mandina at 12:00 PM