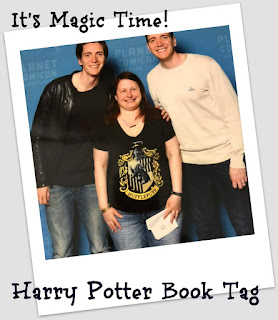 I found this tag over on We Live and Breathe Books, and although it seems everyone was doing this back in August, I thought it would be fun to save for when I was doing my Blog Ahead Challenge to have some posts pre-made for November and December.  And really, HP is always good at Christmas time since there is a Christmas scene in every book.  There wasn't a set button I could find, so I made one with my picture from meeting the Weasley twins back in the spring at our local Comic-Con.  This tag was created by Book Roast.

I loved this book so much I did a book report where my mom helped me make a Bunnicula puppet that I still own to this day.  In fact, shortly after I began teaching, the author visited the students at the school where I worked.  I had to meet him and show him my puppet, which he was really impressed with.


EXPELLIARMUS: A book that took you by surprise?

I didn't ever think this was something I would like.  But I had just begun working at B. Dalton Bookstore, and we were able to strip the cover off of paperbacks that we had to send back when the publisher requested. At the time, there were only 3 or 4 in the series out.  The other employees encouraged me to take the first one home and give it a try.  Needless to say, I was immediately hooked and now am a lifelong HP fan, proud Hufflepuff all the way!


PRIOR INCANTATO: The last book you read?

I actually completed this post back in October, so it was hard to put a book down for this spell. What I ended up going with was what is listed on my blogging calendar for being reviewed right before this post will go up.  I've been reading and loving all the books in the SmartyPants Romance series, and so you'll have to go back to yesterday's blog posts to see how much I might have enjoyed this one!  Now if this isn't the last one I read, it was probably another one in the series.

ALOHAMORA: A book that introduced you to a genre you'd never considered before?

Okay, so it's probably not a genre exactly, but up until about 10 or less years ago, I was always only into very clean-cut guys.  This is the series that maybe got me reading about tattooed boys with piercings.

So, pretty much every book by Emma Hart cracks me up so much!  But, this one was probably one of my favorites, due to its connections to one of my all time favorite tv shows, The Big Bang Theory.

SONORUS: A book you think everyone should know about?

This is a book that my last school district made a theme for everyone to read one year, and it is short and sweet, and really made me think.  I realized that I do things like when I'm in a bad mood, I take it out on someone without even realizing it.  While I'm still working on not doing these things myself, it has also helped me to realize that someone else may be just doing the same thing and not actually being mean to me on purpose, and that helps just by itself.

OBLIVIATE: A book or spoiler you would like to forget you ever read?

So if you liked this book,  you probably don't want to read what I have to say about it.  This became a really big seller in the Barnes and Noble where I work for a while, and as it was a print on demand book at the time, we had a lot of people requesting, but it wasn't something we could just get to have on the shelf.  I noticed it was mostly teenagers asking for it, so I decided to get a set of the series for my school library.  Another librarian in the district wondered why I'd ordered them, because they were supposedly erotica.  Um, no.  It's not, yes, there is some sexual stuff in it, but it's not erotica.  I read it because of the other librarian bringing this to my attention.  And wow, it was boring and stupid, and I have no idea why any teen would want to read this book about a middle-aged man, one that isn't even cool in any way shape or form!  So I wish I'd never read it, but I'm glad I did, to know.

IMPERIO: A book you had to read for school?

I don't feel like I read as many books in school as others had to read, but this is one that I remember reading.


CRUCIO: A book that was painful to read?

I love dogs.  And this book made me cry so much it hurt at the end!  And even knowing what was going to happen, I went and saw the movie.  It is a book I can never read again and I'll never watch the movie again either.  I just cannot stand reading or thinking about dogs dying. Having had to twice make the decision to put my own dogs down as an adult breaks me to still think about.

AVADA KEDAVRA: A book that could kill (interpret as you will)?

Left to interpret this one how I would, I am going with the fact that reading and holding this very large, over 400 page book, almost killed my arms.

I don't usually tag people on these, I figure if you want to do this you will.  If you decide to join in, I'd love to have you stop back by and drop me a link to your post so I can check it out.  If you just want to share what your choice for one of these would be, please feel free to leave me a comment with that as well!

Email ThisBlogThis!Share to TwitterShare to FacebookShare to Pinterest
Labels: book tag, Bunnicula, Emma Hart, Harry Potter, How Full is Your Bucket, JLA, Marley and Me, Rule, SmartyPants Romance, The Scarlet Letter, We Live and Breathe Books