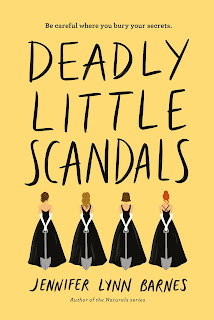 Publisher:  Freeform
Source: E-galley from Rock Star Book Tours which did not influence my opinion.
My rating:  5 stars


"Think of the White Gloves like the Junior League-by way of Skull and Bones?"

Reluctant debutante Sawyer Taft joined Southern high society for one reason and one reason alone: to identify and locate her biological father. But the answers Sawyer found during her debutante year only left her with more questions and one potentially life-ruining secret. When her cousin Lily ropes her into pledging a mysterious, elite, and all-female secret society called the White Gloves, Sawyer soon discovers that someone in the group's ranks may have the answers she's looking for. Things are looking up... until Sawyer and the White Gloves make a disturbing discover near the family's summer home--and uncover a twisted secret, decades in the making.

No one is quite who they seem to be in this twisty, soapy, gasp-inducing sequel to Jennifer Lynn Barnes' unputdownable Little White Lies.

My Review:
I really was looking forward to this one after reading the first book, and was a bit disappointed to not get a physical ARC, but once again, losing my contact at Disney has kept me from a few newer books.  Of course, the covers wouldn't have matched so I guess it's better this way.  I did get it on Netgalley, so I got the chance to keep up with the story. And boy am I glad that I did!  This book had even more twists and turns than the first one!  In fact, there was even one part at the end when we've finally sorted out all the sordid past betrayals and secrets that I had to repeat one character's line out loud to help myself keep all the new family lines and branches straight.  I loved how once again the author started the story with our main character, Sawyer, and her friends in a situation that you knew they needed to get out of, but that she kept only giving you bits of them maybe getting free in between all the chapters telling the past and what happened.  Not to mention we even had a further back part of the story, with Aunt Olivia and others of the parents in the story.  While I assumed we were just learning to be more sympathetic to certain characters through that, and while I wasn't sure exactly why we got the viewpoint of one of them, it all came together in the end, in such a way that totally had me in shock.  Definitely another great mystery with the snarkiness of characters that I grew to enjoy in the first book.