Review with Author Interview and Giveaway: Ask Me Anything by Molly E. Lee 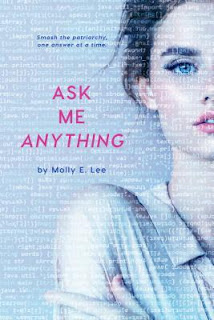 Title:  Ask Me Anything
Author:  Molly E. Lee
Genre:  YA contemporary
Release Date:  May 7th, 2019
Publisher:  Entangled Teen
Source:  Finished copy received from publisher for review which did not influence my opinion
My rating:  5 stars

But Wilmont Academy’s been living in the Dark Ages when it comes to sex ed, and someone had to take matters into her own hands. Well, I’m a kick-ass coder, so I created a totally anonymous, totally untraceable blog where teens can come to get real, honest, nothing-is-off-limits sex advice.

And holy hell, the site went viral—and we’re talking way beyond Wilmont—overnight. Who knew this town was so hard up?

Except now the school administration is trying to shut me down, and they’ve forced Dean—my coding crush, aka the hottest guy in school—to try to uncover who I am. If he discovers my secret, I’ll lose him forever. And thousands of teens who need real advice won’t have anyone to turn to.

Ask me anything…except how to make things right.

My Review:
I knew from the author's reasoning for writing the book when I heard about it, as well as the topic and knowing that the main character had experienced something similar to what I experienced when I was younger, that this book was right up my alley.  This did not prepare me for how good this book really turned out to be.  The story was so realistic. The way certain people acted, the fellow students, to the types of questions people might have, as well as even when they're answered a certain way, some people still wanting to blame and pretend that she said something different that caused them their problem.  I'm not a coder or anywhere close to being like one, but I enjoyed a lot of that part of the story.  I could definitely relate to getting so sucked into what they were doing with what they loved, as I do with many things in my life.  The way that Amber felt that liking something now was wrong when she had told the other guy no, the guilt, all of that is realistic.

But it was even more than just this specific issue that made this a great story.  There was how strong  Amber was, and how Dean knew it, recognized it, respected it, and even told her that's part of what he liked about her without being patronizing.  It was even so realistic how he reacted at the end of the story, but especially because we got his inner dialogue and feelings on the issues, and knowing what he knew about her totally fell into all of it and his final decisions.

Honestly, I can't wait to put this one in my school library to share with students.  Not only did the website answer honestly, Amber used research from experts and adults to answer things, but also always told them that this was an opinion, and they should try to talk to parents or girlfriend/boyfriends before they did anything on their own.  It was very well thought out and exactly the thing that is needed these days with all of the experts and fake news and clickbait news stories out there. 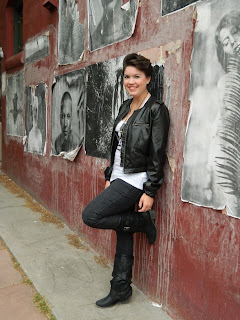 1.      What does your writing process look like? Do you know the whole story when you start?  Or do you just start writing and go with it (seat of the pants writing)?  If you plan it out, how do you do that?  Outline, notecards, post-it-notes, etc.?

Thanks so much for having me!

My writing process varies depending on the content of the book. Normally, I start with the characters—though there have been books where a scene plays out in my head without me even knowing the characters. With Ask Me Anything I saw Amber (my main character) first. She formed in my mind and we took the plot from there. After narrowing down a general concept and theme, I sat down and plotted each chapter—a line or two about each scene—on one of my thousands of notebooks (I have a weakness for buying too many at a time lol). Once that was completed, I sat down every day and wrote. There were some new chapters added and some old ones cut, but for the most part, I stuck to the original plot.

2.      Do you edit as you go, or wait till you're finished before you edit?  How many times would you say you go over it yourself before having another set of eyes look it over?

I always wait until I’m finished before I go back and edit. I have friends who edit as they go and I think they’re amazing for having the power to do it. For me, it’s easier to get everything out. I like the freedom in the first draft, that sweeping feeling of knowing that you’re writing this first draft solely for you. I learn so much about my characters through this process and the true grit of the story and by the time I’m finished I have a much better sense of what is important to the plot and what can be cut. I tend to edit it twice myself before sending it to a trusted friend with an objective eye. Then I send it on to my editor and we’ll go through nearly four passes of edits before the book is sparkling enough for print.

3.      Are you part of a writer’s group that gets together and helps each other with their writing?

I’m not part of a physical or official group, but I’m lucky to have an amazing circle of author friends who help support and encourage me on any given project. I do the same for them and we often cheer each other on and check in with daily word counts. It helps all of us get the words on the page when life tries to get in the way.

4.      I'm a high school librarian, former teacher, and I love how this story touches on schools and what they offer for sex ed. How did you come up with the idea for this story?

Well, thank you for all you do! Seriously, teachers and librarians are real-life superheroes! This concept was a collaboration between myself and my editor, Stacy Abrams. Given the social climate, we were craving a story with a strong female lead who was done sitting quietly by when her peers were in need. As I dug deeper into the story and themes it revolves around, I realized that learning about how to be healthy and safe when dealing with sex as a teenager is truly one of the easier concepts compared to some of the dark situations happening in schools in our modern world. The more I learned about Amber’s character and the deeper I dug into the story, it became clear that being open about sexual health often led to being more open about other sensitive issues, and having healthy communication between adults and teens is the first step in creating a positive change in the world.

5.   What are your favorite: Books/authors/genres:

This is such a HARD question! I love to read and do so across genres but I truly love fantasy and paranormal. Something about the other-worldly elements call to me when I need an escape from reality. Some of my favorite authors are, JK Rowling, Kimberly Derting, Sara J. Maas, Molly McAdams, Staci Hart, Rebecca Yarros, Rachel Harris, and Cindi Madsen!

Movies/TV Shows: I’m a GIANT Marvel nerd and proudly where my Loki emblem wherever I go! So anything superhero related I’m all about. I also love shows like New Girl, Comedians in Cars getting Coffee, Sons of Anarchy, Buffy, and Stranger Things.

Music: I am a Spotify addict so I’m constantly discovering new music! Some of my go-to bands are Blue October, Queen, NF, deadmau5, Halsey, and all kinds of movie scores which I love having on in the background while I’m writing!

Food/Writing snack: Coffee or green tea, and I usually try to go for something that will fuel my writing session like carrots or an apple. Only because I tried my favorite chocolate for a while and that only made me crash LOL.

I’m so grateful you had me over today to chat! I hope you’ll enjoy ASK ME ANYTHING when it releases on May 7th! Be sure to check out the EPIC giveaway I’m hosting in celebration of its release! Spoiler alert—there is a laptop up grabs!!! https://www.mollyelee.com/ask-me-anything-pre-order-giveaway.html

ONE GRAND PRIZE WINNER WILL BE RANDOMLY CHOSEN TO RECEIVE

*If an international entrant is chosen they will receive a $1200 Amazon Gift Card in equal value of prize shown.

All the details and more for Molly's Epic giveaway can be found at the link below: