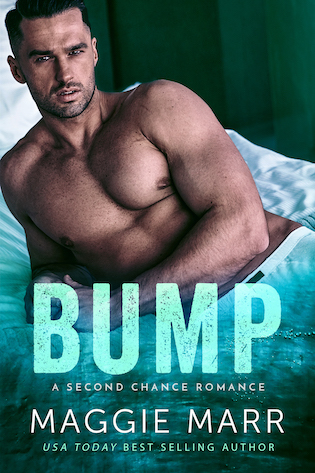 Our relationship is over. We’ve loved and lost. Or that’s what we thought. It was one drunken night at his sister’s wedding and we fooled around…a one-night hook up. And then we became XWB (exes with benefits) nothing serious–just for fun. There’s no way I’d ever get pregnant right?

EXCERPT:
“A surefire way to get pregnant is to have sex.”

I look at my ob-gyn, Dr. Wong, who I’ve visited every year for the last ten years, and for a while during my marriage what felt like daily.

“But you and I both know that’s impossible,” I say.

“You having sex?” she asks.

“No, me getting pregnant. That’s the impossible part. But…” If I think about it, the me having sex part is nearly impossible too—well, at least ever since Dave and I split up and I began my sex-less separated life. Until Becca and Jake’s wedding, that is.

“The test doesn’t lie. You my infertile-myrtle are with child.”

My heart drops to my knees. A mixture of surprise and shock and panic and sadness and…even in the midst of all those feelings, one emotion by the name of joy is there too.

“Again, thought we covered this part, it’s the s-e-x that makes the babies come.” She makes the universal signal for sex by sticking her pointer finger through an o she’s made with her other hand.

“Ha, ha, very funny. It’s just ever since Dave moved out I…” Oh. My. Fucking. God. My jaw drops open, my eyes widen, and panic takes the pole position in the emotional cocktail sloshing through my belly.

“There it is!” Dr. Wong says and smiles wider. “Now you remember the sexy-times that led to the baby-making.”

“Oh shit.” I press my hand to my forehead.

“Not who you want for your baby-daddy? One night stand? Hotty-but-a-notty? I get it, we’ve all been there. You have options, you—”

“No,” I shake my head. “It’s not that, it’s just…” I take a deep breath and sigh. “How far along?”
Although if I do the math, with regards to my near-celibate post-separation sex life, I’m pretty sure I know exactly when this baby-making expedition took place.

“Eight weeks?” she says. “That sound about right?”

The wedding. The fucking wedding that both me and Dave were in. Sure Becca made a beautiful bride, and Jake a gorgeous groom, and it’s been obvious to everyone but them for about twenty years that they should be together. How could I have known that me in a bridesmaid dress and Dave in a tuxedo would be like eating a dozen oysters on the half-shell and drinking a bottle of tequila at sundown? I close my eyes. Dave and I both ditched our respective dates and fell into the sack for a weekend recidivism sex fest. The beginning of our EWB arrangement: Exes With Benefits. Who’d think that any of this would cause me to get knocked up?

Especially after the six years of infertility treatments we endured while married.

I burp. “It explains that,” I say, referring to my burping, “and my weird fixation with green olives.”

“I’ve heard green olives before,” Dr. Wong says, nodding, “but for me it was turkey burgers with cheese. Could not get enough. With a Ben & Jerry’s chaser.” She rubs her tummy. “Good times, you know, until you have to take all the pounds off. So, pre-natal vitamins and we’ll set you up on schedule for visits.”

“Why now?” I ask, interrupting her.

“No, no.” I shake my head. “Dave and I tried everything for so so so so long. Everything. Why now? And how? I mean I was told that the likelihood of me getting pregnant naturally was the same as if I was on the pill, used a condom, and spermicidal jelly all at the same time.”

“Ooops!” Dr. Wong says, shrugging her shoulders. “Man, the one thing I’ve learned in this gig is that Mother Nature? That bitch? She finds a way! When she wants something to happen it does. I have this crabgrass in my front yard and I’ve done everything but blowtorch it and still it lives.”

I squint at her. “You’re comparing my pregnancy to crabgrass?”

“Well…kind of. Not really. But what I’m saying is that life is magic and sometimes I have people who sit where you’re sitting and there’s nothing I can find that’s preventing them from getting pregnant and still they can’t seem to conceive. And then I have people, like you, who’ve tried and tried and tried and have every physical reason why they can’t get pregnant and wham-o! They’re knocked up! The common element is fertilization. For natural baby-making to occur, that happens with the sexy-time. And sometimes, not always, but sometimes when the infertility treatments end and the pressure is off, sometimes Mother Nature decides to slide on in there and give you a bump.”

“Yeah, a baby bump.” She makes an arc motion over her stomach. “But for you it’s gonna be a BIIIIG bump,” she says and makes a bigger arc over her tummy. “Me? I’m a cute short Asian woman, my bumps are much more compact.”

“Just going by what I’ve seen,” Dr. Wong says. “So like I was saying, we’ll get you started on the vitamins and a schedule.” Her words fade into the background and my mind wanders to the man who is the father of this baby that I’ve waited a lifetime to have. Shit. What am I going to do? How am I going to tell him? And how are we ever going to get through this? Especially since our divorce is meant to be final in the next couple weeks.

Maggie Marr is the USA Today Best Selling author of hot contemporary romance. She spends her days working in entertainment and her nights writing. Maggie loves all things pop culture and when she isn't writing, she's reading or binge-watching Netflix. Never miss a new release, sale, bonus content, or extras by signing up for Maggie's newsletter here: maggiemarr.net