Blog Tour Excerpt with Giveaway: The Brilliance of Fireflies by Leslie Hauser 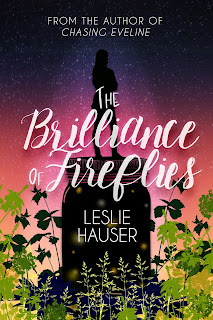 Synopsis:
Emma Loukas had a typical teenage life. Until she didn’t. After choosing to stay home instead of accompanying her family to a minor league baseball game, Emma is not present when a suicide bomber detonates an explosive device at the entrance to the stadium just as her family arrives. In the months that follow, grief therapy and the gloomy looks from friends and her extended family do nothing but drag Emma further down into the rubble left behind by that deadly April afternoon.

To escape the sad reality of her new life, Emma heads out to California to spend her senior year with her grandmother. Getting away from her former life is the only way to survive. It doesn’t take long, though, for Emma to experience Grandma Connie’s dementia, and it’s more than a seventeen-year-old is capable of handling on her own. Now Emma fears she has just made her bad situation worse, and she begins to wonder if it’s even worth trying to survive.

But when the family mementos on the dresser catch her eye, Emma feels a bit of light turn on inside her. Maybe the way to make sense of her new life is to live the lives her mom, dad, and brother no longer can. So she sets out to achieve each of their dreams. It won’t be easy, but it’s all Emma has left, and in the process, she just may find out who she’s supposed to be.


There are exactly thirty-seven wisps on this half-blown dandelion twirling back and forth between my fingers. I’ve counted several times because I need to know exactly how many chances I’ll have.

When I was little, my teacher told me that, when you blow them into the air, dandelion seeds carry thoughts and dreams to loved ones. So, that summer when my friend Callie and I were ten, we hunted every dandelion in our neighborhood and sent a barrage of fluff into the blue Ohio sky. I aimed my hopes at Billy Martin, but now I wish I hadn’t wasted them on some boy I forgot about three months later. I wish I’d sent more thoughts and dreams to my family. I’d like to do that now, but how do you send a lifetime of thoughts in a single breath?

I stare at the bald side of this dandelion head and wonder where the other wisps have traveled and if they’ve made any dreams come true. Does it still work if half the wisps have already been spent? I work this question like a math problem as I wait for my aunt or uncle to pick me up from therapy. They’re usually late; with six kids, the to-do list never ends. I feel bad that I’m one more responsibility for them. It’s one of the many unfair things about this situation.

My phone buzzes in my back jeans pocket. Maybe they’re on the way. I tap the screen, and Callie’s name appears instead. How are u doing? ☹ There’s always a sad face these days. I haven’t seen an LOL or a laughing emoji in over two months.

I text back, Okay 😊 waiting for my ride. Call u when I get home. I’m not lying when I say I’m okay. My aunt and uncle insisted I enroll in this teen therapy group. They said it would help me “process my grief and move forward.” I don’t know that I need help moving forward; time doesn’t allow for anything else. But I guess it’s helped to share a few things. They say I have something called “survivor’s guilt.” Maybe that’s true. It seems more like logic to me. I’m not the victim. I’m still alive.

“Hey,” a timid voice says from behind me.

I turn and see one of the girls from the group. She’s a sophomore at my high school. She lost her dad and little sister in a house fire.

“Hey,” I reply. “What are you still doing here?” Session ended forty-five minutes ago.

“My mom said she’d be late, so I stayed to help clean up. What about you?”

“Same. My aunt and uncle are pretty busy. Sometimes they forget me.”

She stares down at her purple Converse that match the new purple streaks in her hair. A few crickets chirp in the late afternoon air, and I continue methodically twirling the dandelion puff in my hand.

“I felt bad for Jason in there,” she says in a near whisper as her eyes focus on the movement of my hands.

“I know. He told me a couple of weeks ago that soccer was the only thing getting him through all of this.” Jason’s mom died of cancer a few months ago, and he tore his ACL last week. The moment he opened his mouth to share, a dam burst and unleashed a sadness he couldn’t seem to control.

“Sometimes it just makes me sadder when I come here.” She stares off at the cluster of trees to our right.

Her phone beeps. She checks it then puts it back in the tiny pink purse she always carries with her. I think it was her sister’s. “What’s with the dandelion?” She angles her head at my hand.

I stop the twirling. “I don’t know. I saw it in the grass while I was waiting. One time someone told me that if you blow dandelion seeds into the air, they carry your thoughts to people you love.”

“Really?” Her eyes widen then shift to the ground, scanning the grass around her. I bet there’s so much she wants to send to her dad and sister. And I know she worries about her mom now, too.

I hold out the dandelion puff. “Here. You can have this one.”

I, too, have a ton to say to my mom and my dad and my brother Connor, but there’s such sadness in her eyes—not just now but always. It’s a haze, almost as if her brown eyes are covered in all that ash that stole her happy life.

I take a step forward. “It’s okay. I’ll find another one.”

She takes it from my outstretched hand. She inhales as much air as she can and closes her eyes. When she opens them, she blows with all her might. Her breath has so much force behind it, the seeds shoot off into the air, scattering like shrapnel.

An image of my dad and Connor flashes in my mind. Every hair on my arms bristles and my muscles clench. The whole world seems to freeze, and I can’t breathe.

A moment later, a pair of headlights frees me of my paralysis. My uncle’s black minivan stops in front of us. “That’s my ride. Are you sure your mom’s coming? We could give you a ride home.”

“No, thanks. My mom is having one of her days, but she said she’d be here in twenty minutes. I figure it won’t be more than an hour.” She bites her lip and shrugs.

“Okay. See you Friday.” I wave and walk to the car.

As soon as I slide open the door, shouts and squeals bombard me. “Gimme it!” my four-year-old cousin Christian yells at his twin sister Chelsea. She sits in a car seat next to his, holding a tan stuffed dog and wearing a devilish grin.

“IT’S MINE!” Christian screeches as his tiny hands form fists and his chubby legs shoot straight out in front of him.

“Kids! Enough!” my uncle Jim yells over his shoulder. “Chelsea, it’s his toy. Give him the dog.”

“But Daaaad! He keeps throwing it at me!”

“Fine,” she grumbles. She throws the stuffed dog at Christian and whips her head toward the window so fast her two blond braids smack her in the face.

I start to slip into the way back when Uncle Jim says, “Emma, could you sit between those two, please? They’ve been at it all afternoon.”

“Sure.” I squeeze myself between the two car seats. “Hey guys.” I smile at them while I dig around for the seat belt, but neither pays me any attention. Christian sings and trots his stuffed dog up and down his legs, and Chelsea has moved on to a book.

Up front, my fourteen-year-old cousin Joey complains, “Dad, I was supposed to be at practice ten minutes ago. You made me join this stupid summer camp here, and now you can’t even get me there on time.”

Uncle Jim glances backward, then in a hushed voice, but one that I can still hear over the talk radio, says, “Look, Joey, you know why we had to spend the summer in Ohio. So it was either play soccer here or not at all.”

“Well, fine, then you could at least get me there on time. I’m already an outsider, and this only makes it worse.”

“I’m sorry. Your mother forgot about Emma’s therapy, and Aunt Jules has the other car, so we had to pick up Emma.”

I shrink in my seat, and my chin falls to my chest. Chelsea leans over and hands me one of her fruit snacks. I know they love me and want to help.

And that just makes it all worse. 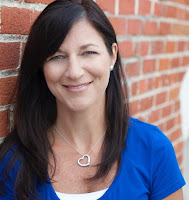 I am a YA writer and middle school teacher. I have a B.A. in English from UCLA and a Master’s degree in Educational Administration. I was born in Cincinnati, Ohio, and currently reside in Los Angeles, California, with my dog Mr. Darcy.

When I’m not living in fictional worlds inside my head, I run all sorts of distances, torture my body at CrossFit, and DVR entirely too many television shows. I dream of one day returning to the Midwest to live on a farm. Or perhaps owning a cookie delivery service.

I am the author of CHASING EVELINE and THE BRILLIANCE OF FIREFLIES.