I'm not horribly behind, although two of these are from last month, but I'm mostly keeping up on reviews because of trying to get on as many tours for the books I have to review instead of taking a bunch of ARCs and not making sure I get them done.  Now, I probably have another audiobook finished by the time I post this, so we'll see if this goes up to four reviews instead of just three, but I'm making this post all my audiobooks I need to review. 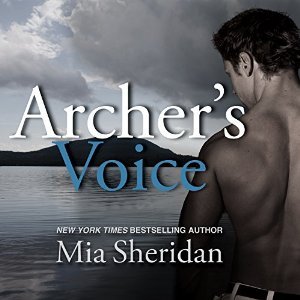 I'd wanted to read this because there was a page for it in the romance coloring book I have.  I finally decided to use one of my Audible credits on it.  It started really good, then there was a boring patch at the beginning where I wondered what would be happening, but then it picked up again.  It was a roller coaster of a ride, and I really enjoyed it.  It was almost a 5 star read, but there was just something that kept it from being that for me.  It had some good twists, ones that I thought I knew what was coming, but then it wasn't what I expected.  A good read!

When Bree Prescott arrives in the sleepy, lakeside town of Pelion, Maine, she hopes against hope that this is the place where she will finally find the peace she so desperately seeks. On her first day there, her life collides with Archer Hale, an isolated man who holds a secret agony of his own. A man no one else sees. 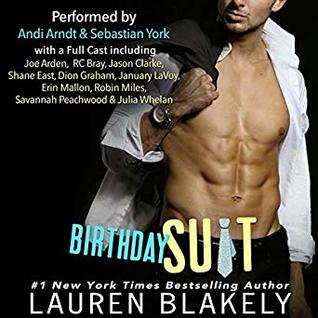 So this book had a full cast of narrators, almost one for every main character!  That was definitely fun, but you could tell it was also definitely written for this type of an audiobook.  It was a lot of fun to listen to it this way, and of course to swoon over Sebastian York's voice.  Although there were times that it almost was too many people for me, just because of what I am used to with most audiobooks. But I have a feeling this may be how audiobooks are recorded more often, when possible anyway.

I loved the story, had my usual irritations with the reasons the two main characters held themselves back from just giving into their feelings as well.  I also had to stop listening to this for a bit when I started because I was reading a book with a similar storyline, where the guy liked the girl that he met first, but she ended up falling for his best friend instead.  Both stories were good, this one so much fun as well.  It was neat to get a little time back with at least one of our characters from an earlier audiobook, Lucky Suit.  Also, again with all the talk of chocolate, just made me want chocolate!

Now, you need to get this audiobook and listen to it, because there is like about an hour interview with two of the narrators afterwards, two of my favorites, Andi Arndt, and Sebastian York. And while I was disappointed they didn't answer the question I'd submitted, it was still so much fun to listen to them talk to each other and answer the questions that they did.  Now, I'm still left needing to see just what Sebastian York looks like in real life. Does he match that voice?

Here is the blurb from Goodreads:
There is no rule in the Man Code as unbreakable as this: no matter how beautiful, smart, clever, and witty she is, do not—under any circumstances—fall in love with your best friend’s woman.
Yeah. So there’s that. Look, it’s not like I didn’t know I screwed up by falling for her.
Also, for the record, unrequited love sucks big time.
And, I might have cut myself some slack by now, given everything that went down in the last few years, but Lulu just walked back into my life in a big way.

***
There are three things I've never been able to resist—my friends, my family, and chocolate.
Leo Hennessy? He was nowhere on that list. He's been a true friend—a friend who walked through hell and back with me.
Now, I'm stepping into my new future. I didn't expect it to include a riddle-filled, race-against-the-clock scavenger hunt across New York City.
With Leo.
Suddenly, I'm looking at this man with new eyes...
But my life spun out because of a man once before, and I can’t risk my fresh start, no matter what the temptation. And Leo is most definitely a temptation of the sexiest, sweetest, and most dangerous variety.
More irresistibly delicious than chocolate...

Faking It by K. Bromberg: 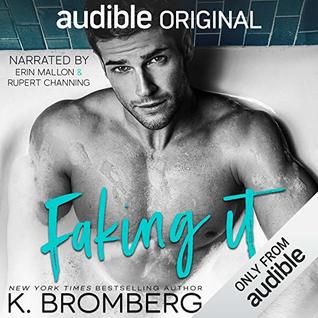 As always, I loved this story by Bromberg.   She made me be able to connect with a woman who was the total opposite of me, beautiful model type of woman.  But boy does she not only know how to make me laugh, but she makes me know how to cry.  There were so many parts at the beginning where I felt like the one kid on The Simpsons who is always saying "ha ha" and pointing, because I felt that way whenever Harlow would pull one over on Zane.  But then Bromberg also knows how to write the steamy sex, perfect when needed in the story. Another winner for me, another book that tells me Bromberg can do no wrong!

Here is the blurb from Goodreads:
Faking it never felt so good in this red-hot new standalone by New York Times bestselling author K. Bromberg. Zane Phillips mistook me for his dog walker. It shouldn’t surprise me that the man with a suit more expensive than my rent would assume that I was there to serve him. The positive? I put him in his place. The negative? I missed my job interview because of it.Now I find out he’s a rich Australian entrepreneur, and he wants to make up for tanking my interview. Yes, he’s impossibly hot — but he’s also an arrogant jackass — so... no thanks.But after a little white lie I tell spirals out of control, I’m somehow offered the chance to play Zane’s girlfriend to help promote his new dating website — and the best part? He can’t say no because he’ll get caught in his lie too.Little did I know this would entail sharing a tour bus with him for the next few months. The fact that the bus has just one bed isn’t the most ideal of circumstances, but this spokesperson gig might be the kick in the pants my career needs, so why not take a chance? Famous last words.Now I’m crisscrossing the country — and sharing that bed — with the one guy I can’t stand. And even worse, my traitorous body is wondering at every turn what it’s like to be down underthe gorgeous Australian. But as the miles unfurl, so does our passion… and if I’m not careful, I might end up believing that fairytales really do come true.
Posted by Lisa Mandina at 7:00 AM