With this post I'll finally have all that I've read from before April reviewed.  And as we get closer to summer, I will hopefully be able to stay caught up on reviews. Although a week in New Orleans in June for ALA might take away from time to read.  But anyway, we'll see how that goes later.  Let's jump right in, shall we?

Beneath These Lies (Beneath #5) by Meghan March: 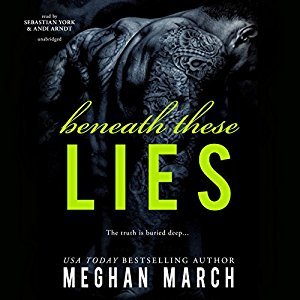 This was one that had me jumping back and forth, as we didn't know for sure at first if the main character, Valentina, was going to end up with Hennessy or Rix.  And while it was exciting to know that the deep, seductive voice of Sebastian York would be reading to me, we didn't get him for a while.  I figured it was in order to keep us guessing on which guy it would be in the end.  But then when he did get a few chapters in, he actually was doing both Rix and Hennessy, so again, keeping you guessing.  Also, I thought how the tattooed guy on the cover would give it away that it had to be Rix, well, Hennessy also has tattoos, so still no definite answer.  It was obvious that Hennessy was the better match for Valentina, with who her family was.  But the attraction between her and Rix was so much more and made me know that I wanted them to figure out how they could actually make this work. The fact that Rix was trying to figure out how he could get things done in his life so that he could be right for her, well, that said a lot about him.  There was a lot of suspense in this one, not knowing how Rix would get things done, how he would keep Valentina safe.  Knowing what Valentina had gone through in an earlier story, how she'd been attacked, it was at times hard to understand how she could let herself get anywhere near Rix's world. But he took care of her.  At the end you could totally see the big event coming, all the clues were there.  But there was definitely a twist that I didn't necessarily see coming right away.  And I liked it.  I thought this was the final book in this world, and I am so relieved to see that there are two more.  I hope that the man who didn't end up with his woman in this book will be one of those final stories.  I won't tell you which one it is, I'll let you read and find out.

Oh yeah, I also can't WAIT to meet the author at Book Bonanza in Denver this July.

Here is the blurb from Goodreads:
Look, but don’t touch…she might as well wear a neon sign that says it. It just makes me want her more.She might be above me in every way, but I still want her under me.I’ve got no business touching her rich-girl skin, but that won’t stop me from stealing a taste. Because rules were meant to be broken—especially when the prize is so fine.In a world where nothing is as it seems, what's buried beneath these lies? 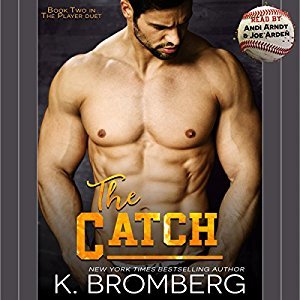 So, as you might remember from my review, The Player left off on a big cliffhanger.   So when I started this one, I was ready to find out exactly what had happened.  And at first, I was a bit confused based on what was happening.  But let me tell you what, Bromberg's writing must have a direct connection to my tear ducts, because her books always make me cry!  And this one was no exception.  I totally understood why Easton was upset on the one hand, but I don't think it makes sense for him to blame Scout the way he did, because it makes no sense that she would do something that also made her lose her chance at getting the contract for her dad's practice if she was doing what Easton thought she was doing.  And then of course there is the secret that Easton has, and when we find it out, it is somewhat along the lines of what I'd thought.  When Easton finally realizes that what Scout did was her trying to make the best decision she could at the drop of a hat with no support from him or his agent, I liked how it happened.  I feel like that was a pretty realistic way of handling it all.

When Easton got drunk, he was so cute.  I loved that part.  And it seemed as if all of it was resolved so quickly, and I knew there would be more.  Of course there was with his secret.  But not just that, I knew the part about Santiago had been alluded to over and over throughout the first book and this one as well, so I was not shocked when my hunches were proven to be correct.  And with that situation, I am so glad that Easton didn't get drawn into the whole thing of thinking that Scout was lying to him about that, when she wasn't at all, I feel like that was so much more realistic than how it is normally turned into big drama for a similar thing in other stories.

Again, I loved this book.  Made me so ready for baseball season here in Kansas City, even though after losing my favorite, Eric Hosmer, it seems like we may be back to the less successful Royals team I grew up with most of my life.  I'm pretty sure I'll read any and everything that Bromberg writes, and you should pick her books up too!  Also, I love Andi Arndt's narrating, she pretty much will make me listen to anything. And I'm beginning to become quite the fan of Joe Arden as well.

Here is the blurb from Goodreads:
After an unexpected twist of fate, All-Star catcher Easton Wylder is left questioning the loyalty of everyone around him.Even the woman who shares his bed, Scout Dalton.But if Easton thought being uprooted to the last place he expected was the only challenge life had to throw at him, he was dead wrong.With an ailing shoulder and his career in limbo, his decision to make an unexpected change leads him to question everything – Scout’s love, family loyalties, and whether he can conquer the one obstacle he’s never been able to overcome. The secret he’s never shared with anyone.He may be a man pushed to his limits, but he’s hell-bent on proving his worth no matter the cost. 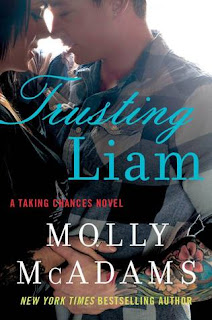 Okay, when I read my first book by Molly McAdams, Taking Chances, I was not that impressed.   The next two books I read by the author definitely redeemed her for me, and believe it or not, I actually told her that when I met her.  But this book I adored.  I loved all the ways that McAdams connects back to not only the one I didn't enjoy, but to the next ones that I did, Forgiving Lies and Deceiving Lies.  I loved that Kennedy's family is from the series that I did really enjoy.  But Liam's family, even though being from the book that I wasn't thrilled with, well, now I actually want to go back and reread, and remember all the characters that I didn't quite remember in this book.  I had assumed, knowing who Kennedy's family was, that the reason she didn't want to fall in love again was a little more sinister than what it turned out to be.  In fact, when that past shows up and throws a wrench in her finally getting good relationship with Liam, I was definitely in shock.  But I was also upset with her dad for his part in it.  And while what Liam did irritated me a bit, I understood him, especially when he was explaining to his family what part from his past he was playing in this situation.  I knew what was going on with Kyra at the end was what I expected it to be.  Although I feel like Kennedy was definitely a bit self-involved at that time or she should have figured it out.

Honestly, any book that makes me look back fondly on characters for a book that I didn't adore, and makes me want to go back and reread it, well that is a winner and a well-written story to me.  I look forward to more books by McAdams in the future.  Also, I loved the whole "Goodnight, Moon" bit, and how the author finally tied it back to the children's book at the end, since it had been in my mind since the first time Liam said it.

The narrators were good, although I had to speed up the audiobook to 1.25 because they were a little slow.

Here is the blurb from Goodreads:
From the New York Times bestselling author of Taking Chances, From Ashes, and Stealing Harper, comes the new unforgettable adult romance Molly McAdams’ fans have been waiting for—the sizzling story of a young woman who must place her trust in the one man who can break through her defenses.A night they will always remember…a connection neither can deny…a secret that could destroy it all…When Kennedy Ryan moves to California, she never expects to come face-to-face with Liam Taylor—the intriguing man who has haunted her thoughts for a year. A man who led her to breaking every one of her rules for a single night of passion that ended up meaning more than it was ever supposed to. Accustomed to disastrous experiences with men, Kennedy shields herself before he can break down more of the carefully built control she’s clung to for the last four years. But every time she sees Liam, she feels her resolve weakening.Liam Taylor has been asked to help socialize his boss’s nieces. But what he thinks sounds more like a babysitting job ends up leading him to the only girl who ever slipped away before morning—a girl he thought he’d never find again. And now that she’s within reach, Liam’s determined to never let her go.But when a secret from her past tests their relationship, will they be able to cling to the trust Liam has worked so hard to build?