Still working to catch up on reviews!  So here are my last three e-books that are not part of blog tours. 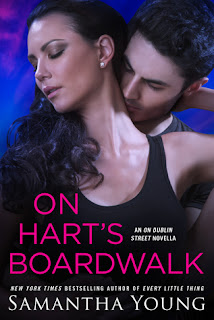 Synopsis:
One of New York Times bestselling author Samantha Young’s most beloved couples returns for the first time in a brand new novella set ten years after her blockbuster bestseller Before Jamaica Lane…

Nate and Liv have a great life together but they miss the spontaneity and freedom they enjoyed early on in their romance. Careers and their children have inevitably kept them busy, so when Nate discovers Liv is feeling disconnected from him, he plans an anniversary trip to the idyllic seaside town of Hartwell, Delaware. There he hopes they will have the opportunity they’ve been craving—a chance to reinvent themselves and fall in love all over again.

With each new day comes a new adventure, from wedding crashing at the five-star boardwalk hotel to pretending they are two strangers having a chance encounter at the boardwalk bar. In the midst of this daring, sexually charged game of romantic rediscovery, Nate and Liv discover the only constant they need is each other.

If you've followed me for very long, you know that Nate is my #1 book boyfriend.  I even made a shirt for him, and also gave the shirt to the author to share in my love for him. 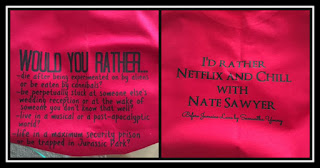 So when the author announced a new story, albeit a short story, featuring my favorite couple, I was so excited and could NOT wait!  In fact, I rarely, if ever, pre-order an e-book.   But I was on the edge of my seat, finger hovering over my mouse ready to purchase it as soon as I had the chance.  But when I started it, wow, that first little prologue, I was crying.  And then when I jumped into the story, I was crying.  I couldn't believe the author was putting my poor favorite couple through that.  But later one, when the little part at the beginning fits into the story later on, it wasn't so bad.  Nate's behavior, while maddening to Liv (and me), fit him perfectly based on how we knew him from his story.  Of course getting back to all the On Dublin Street gang made me feel like I need to go back and read the whole series again.  Not only that, but I am still impatiently waiting for the next chapter of the Hart's Boardwalk story.  Which reminds me I need to go bug the author about when that story is coming. 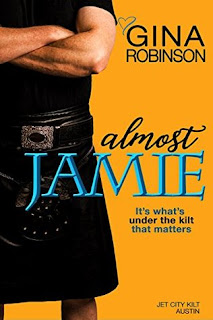 So, this one popped up in one of the daily emails I get about free e-books, and with my recent falling in love with and obsession over Outlander, I knew immediately I needed to read it.  And so when I downloaded it, it was only a few days before I gave in to my temptation to read it.  It was a quick, hard to put down read.  Although it was a bit frustrating to get so close to the end only to realize it was going to have a cliffhanger!  Now I must buy the next one.  So good job by this author!  She got me hooked with a free book so I will now buy her others.  I've discovered quite a few of my new favorite indie authors this way.  Authors that I will now buy their books, all of them, often having to buy the physical copies because I know how much I will love them and want to reread them.

One thing about this book that grabbed me was that I had been thinking when I was attending my own local Comic-Con how much I wished there would be people there from Outlander.  And in this story, the stars from the book's version of Outlander are at Comic-Con.  I mean if Sam Heughan was anywhere near me, I'd probably faint, but I still want it to happen some day!  To be in a room listening to him talk in his Scottish accent, I'd be just sighing constantly, and probably pretty worked up as well.  Another thing in the story that I liked, I wish that there was a dating service like the one Austin works with.  I'd join.  Also, when he mentions that guys will hide their insecurities by acting indifferent, well, not just guys.  I do that as well.  If I act that way, then the person I like won't know if they've hurt my feelings, right?  Anyway, this was a good one.  I highly recommend it, the reason it didn't get the full 5 stars is because of the cliffhanger only.

Here is the blurb from Goodreads:
A kilt meets dress modern love story.


If you like good guy geek heroes who look hot in kilts, strong, intelligent heroines, and poignant romance, then you’ll love Almost Jamie, the first book in Gina Robinson’s light, fun contemporary romance Jet City Kilt Series.
Half American, half English physician Blair Edwards has always wanted her Jamie, the Sinclair, the dashing Highland laird of the wildly popular TV series, Jamie. Unfortunately, it's so hard to find a man like him in the modern world. When the stars of Jamie come to Seattle's Jet City Comicon, Blair dresses up as Jamie's Elinor in a vibrant red gown, hoping to get a seat in their popular presentation and a good view of the handsome, charming star of the show. She doesn't expect to be called on to use her medical skills to treat an injured cosplayer who looks almost like…Jamie. And sets her wounded heart racing.
Cosplayer, geek, app designer, and cyber security expert Austin MacDougall has been styled by his matchmaker to look like the actor who plays Jamie. He's been trying to win the prize for best amateur cosplayer for years. Against the advice of his friends, he goes to Jet City Comicon in a kilt as Jamie, the striking redheaded Highlander. When he's injured during a mock battle with a vicious cosplaying orc, his friends get him help from a beautiful doctor in a stunning red dress.
Has Austin met his Elinor? The adventure is just beginning…
Find out why readers love Gina Robinson’s good guy heroes, the strong women they fall for, and their funny, witty, romantic stories.
Oh yeah, check out the alternate cover.  Do you like this one, or the one above, the one that I saw when I decided to buy it? 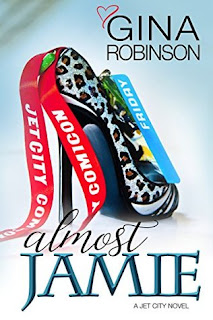 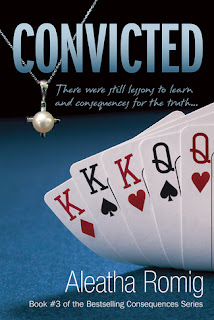 This is a series that started out so dark, but I loved it.  This last book took me a bit longer to read because it was so many flashbacks, and not knowing why Claire was in the place she was, or why she wasn't talking, or what happened to Tony.  So it got hard in places to follow because of these things. And I think that kept me from having my interest kept as much as the first two books, Consequences and Truth, which you can read my reviews for them HERE.   Although I've rated all three of the books at 4 stars, this one was not my favorite.  I am really excited though, that I will get to meet this author at Book Bonanza in July.  I have to buy the first book in the series to get autographed and will have to get my picture with her.  Now, while I was okay with all the twists and turns when we found out what really happened finally to get them to the point where they were, I got so mad at Tony for the first thing he did at that point.  I was a little teary-eyed for sure.

Here is the blurb from Goodreads:
Book #3 of the bestselling Consequences series:From New York Times and USA Today bestselling author Aleatha Romig comes the shocking third book of the Consequences series and the long-awaited, action-packed conclusion of Claire and Tony’s tumultuous relationship.Stick to your convictions.Against all odds, Claire and Tony have found their way back to one another, but it doesn’t mean a happy ever after. Not even close. Just when they seemed to have it all—love, respect, and the promise of a family—the game master exposes the truth and Claire’s world once again unravels. With old convictions wavering and past transgressions coming to light, the cards have changed and luck is not in the deck for Claire and Tony.Abandon all assumptions.Lost in a constant nightmare, who will save Claire from her past? From herself? Everyone has a hand to play, and now they’re playing for keeps. Everything known to be true is questioned. Motives are explained. The past is once again unearthed, and this time, secrets lurk between dreams and reality, between the past and the present.The clock is ticking.Time is running out on Claire…on Tony…on their happy ever after. When the final cards are played, will their unconventional love trump the opposition?In the end, some will discover their bets were too high, and all will learn the most crucial lesson—there are always consequences for the truth.You must stick to your conviction, but be ready to abandon your assumptions. –Denis Waitley
Posted by Lisa Mandina at 6:30 AM