Author Interview with Giveaway: The Pros of Cons by Alison Cherry, Lindsay Ribar, and Michelle Schusterman 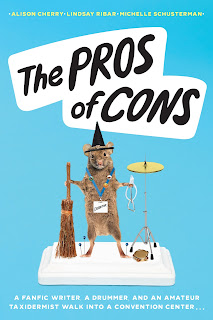 Title: THE PROS OF CONS


Synopsis:
Drummer Phoebe Byrd prides herself on being one of the guys, and she's ready to prove it by kicking all their butts in the snare solo competition at the Indoor Percussion Association Convention.

Writer Vanessa Montoya-O'Callaghan has been looking forward to the WTFcon for months. Not just because of the panels and fanfiction readings but because WTFcon is where she'll finally meet Soleil, her internet girlfriend, for the first time.

Taxidermy assistant Callie Buchannan might be good at scooping brains out of deer skulls, but that doesn't mean it's her passion. Since her parents' divorce, her taxidermist father only cares about his work, and assisting him at the World Taxidermy and Fish-Carving Championships is the only way Callie knows to connect with him.


When a crazy mix-up in the hotel lobby brings the three girls together, they form an unlikely friendship against a chaotic background of cosplay, competition, and carcasses!

Author Interview:
1.  What does your writing process look like? Do you know the whole story when you start?  Or do you just start writing and go with it (seat of the pants writing)?  If you plan it out, how do you do that?  Outline, notecards, post-it-notes, etc.?  Are you part of a writers group that gets together and helps each other with their writing?


Michelle: Alison and I are outliners, and Lindsay is more of a pantser. So we had to adapt a little for this book! And by adapt, I mean force Lindsay to try outlining. :) The day the three of us sat down to actually start writing this book, all we had was the concept of three girls at three conventions. I don’t think we even had character names yet.


Alison: We definitely didn’t! I distinctly remember how loudly we cackled when we came up with Soleil. First we made a general outline of the full book—it was basically just a list of what happened on each of the five days. From there, we met up and had an in-depth discussion every three to six chapters, nailing down exactly what would happen next. In between, we worked on our own chapters and posted them in the massive Google doc when they were ready to be critiqued.


Lindsay: Outlining is exhausting, by the way. But it was also super helpful!


2.  How do you come up with your ideas for your stories?


Alison: I had the idea for this story when Lindsay and I went to LeakyCon—a Harry Potter fan con—in 2014. In the same convention center at the same time, there was a church con, a chess con, and Miss America. It was just too ridiculous and great NOT to turn into a book. And I love writing about the weirdest possible subjects, so of course I picked the strangest convention I could think of for my part: the World Taxidermy Championships. I was so excited the day I learned that existed.


Lindsay: Yeah, Alison literally stood there, in the lobby of the hotel adjacent to the convention center, and went, “This is a book. There’s a book here.” And almost immediately, I was like, “OH GOD CAN I WRITE IT WITH YOU.”


Michelle: I think Alison told me about the idea, and that she and Lindsay were going to try collaborating. I don’t know if she saw the longing in my eyes or what, but she asked if I wanted in and I immediately said yes.


Michelle: For fun, since childhood! For publication, since my late twenties.


Alison: Same! Though I didn’t write much fiction in high school or college—I was more of a journaler at that point.


Lindsay: Same but different! I only started writing original fiction, with an eye toward publication, when I was in my mid-twenties. Before that, it was all fanfiction, all the time.


4.  What tips do you have for aspiring writers?


Alison: Don’t be afraid to write terrible first drafts—just get something down on paper. You can’t fix something that doesn’t exist. Every book you’ve ever loved started off as a huge, messy pile of words. There’s no shame in producing one yourself!


Michelle: 100% agreed with Alison. I’ll add to it by saying that once you’ve got that huge, messy pile...revise it. And then get beta readers. And then LISTEN TO THEM. And then revise it again.


Lindsay: Also, read. The best writers all started off as good readers. Read the classics. Read  the latest award-winners and bestsellers in your genre. Read outside your genre. Read eeeeeeeeeverything.


5.  Since your story is about conventions, what is one convention you have gone to or would love to go to at some point in the future?


Alison: Before writing this book, I had no particular desire to go to the World Taxidermy Championships… but now I really do.


Michelle: (Same, actually.) I based Phoebe’s con on the Percussive Arts Society International Convention, which I attended seven times in high school/college. I’d LOVE to go again. It’s huge and noisy and just so awe-inspiring.


Lindsay: I’ve been to a handful of fan conventions at this point, and I’ve discovered that my favorites are almost always the smaller, more focused conventions. Like, ComicCon is great, but it’s also super overwhelming. I’m more into conventions like Ascendio or Leviosa, which happened in 2012 and 2016 respectively. Both were just big enough that you had plenty of options when it came to super fun things to do, and just small enough that you could find a way to see pretty much everything you wanted to see.
Posted by Lisa Mandina at 7:00 AM