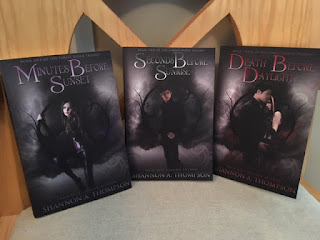 So, I picked up the first book in this series when I found out the author was going to be appearing at the Barnes and Noble where I work during B-Fest.  Of course as I sped through the page-turning first book, I had to buy the next two books before I finished it, so that I could read right through the series without having to stop.  I finished all three in about a week's time, not quite finishing the last one when I got to meet the author and get them autographed.  In case you missed my post last Sunday, here I am with the author, Shannon A. Thompson, who is standing on my right, the left side of the picture. 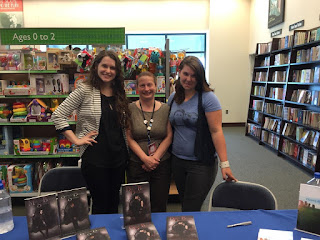 Anyway, since I sped through the series, and I'm so behind on reviews, I'm going to do all three as mini-reviews in this post.  I'll just say that I enjoyed them all, and could barely put them down to do anything else.  Including going into the store the day I got to meet the author! 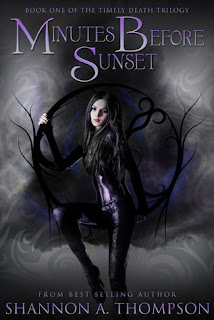 There are two main characters in this story, and we get the story from both points of view through alternating chapters.  First is Jessica, who has just moved to town with her adoptive parents.  It turns out that she actually was born in this town, and her parents died in a car accident.  She immediately makes two friends, Crystal and Robb.  But she gets stuck in the only open seat in her homeroom next to the other main character in the book, Eric Welborn.  Eric used to be best friends with Robb and Crystal. But when another car accident caused the death of one of their friends, things changed.  At first Eric is standoffish with Jessica, like he is with everyone else at school.  Until she is tired of having to depend on him to make sure she gets a good grade on a project she was stuck being his partner on.  Soon a friendship develops between them, as much as it can as secretive as Eric continues to be.  You see Eric is a shade, he's not completely human, but during the day he looks like a human, while at night he looks like his shade self.  Eric is kind of the "chosen one" and on the day he turns 18 he is supposed to fight against the "chosen one" of their enemies, the lights.

Eric has run into an unknown shade at the river nearby.  He keeps her a secret, and trains her, as she didn't even realize she was a shade until she met him and began talking to him.  As the story goes along, we will find out that Jessica's past has a connection to Eric's life, and that both Jessica and Eric have secrets.  I will say, I knew who the unknown shade was.  I'm pretty sure it is easy to figure out as you read.  I won't give it away though, I'll let you read for yourself!  Which you definitely should. 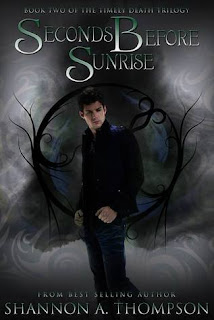 Of course, if you haven't read the first book, I can't promise I won't slip up and give any spoilers for that one, so STOP RIGHT NOW, if you don't want those.  Jessica and Eric found out from the prophecies that Jessica is actually the third descendant, or "chosen one", something that doesn't always come around.  As a shade, she and Eric fall in love, as the prophecy predicted, but she could be used by the light side to fight against the darks.  So she chooses to have her memory of being a shade and all the prophecy erased, so that she can try to stay safe, and help the dark side to stay with the advantage.  Only it is so hard for Eric to pretend that he isn't in love with her.  And memories seem to keep slipping through, confusing Jessica.  Eric has a horrible car accident during all this stressful time of preparing for his 18th birthday, and Jessica, even though she only remembers Eric as her homeroom partner, races to his side in the hospital to check on him.  But as things start to change, and the memories start to come back to Jessica, it will seem more important to give her memories back to her so that she can help the dark fight.  As the lights start coming to them, as they figure out that Eric is the descendant, it also becomes clear that there is more about the prophecy they don't know, as well as that they must figure out just who is the light descendant as well.  Friends and loved ones will die in the fight, spurring on the search for a way to make sure that Eric defeats the light side, and deciding just how Jessica staying alive may affect them all. 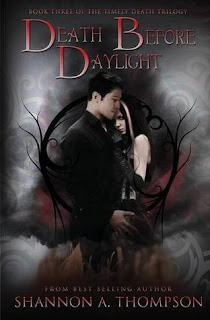 Again, if you haven't read the first two, you'll need to STOP RIGHT NOW to avoid any spoilers.  As more and more details of the prophecy become clear, there are more and more fine lines that are becoming crossed in the fight between the two sides.  There are new types of shades/lights.  Most of the shades seem to be losing their powers, other than Eric and Jessica.  Something that Eric's mother left for him will be come essential in helping Eric and Jessica stay alive in the battle.  Friends will become known who before weren't even known to be anything other than human.  Ghosts from the past, Eric's mother, Jessica's parents, will show just what their deaths or lives contributed to the end game.  Jessica will learn that whether Eric or the other descendant dies, she will then have to become the leader of whichever side has lost.  And this makes her worried that the shades will no longer trust her, knowing that she may be, and even is in the process of getting a light side.  Eric and Jessica will be tortured by the light, both will try to sacrifice in order to save the other's life.  And in the end, it will be their love for each other that will help them to find out just how they can save their own families, as well as maybe save both sides in the end.

As I said, this was a great series.  My only issue is that even with all that we learned in this wonderfully built world, I felt like I was still missing something.  Nothing that kept me from understanding and enjoying the story, but it just seemed like maybe some details were missing?  I don't know.  I loved the stories, and it all made sense to me in the end, so maybe my thoughts here are crazy.  But that little niggling feeling is all that kept me from giving each book 5 stars on Goodreads.  I gave it 4, more like a 4.5 if I could give half stars.  But I highly recommend this series, and I look forward to reading more from this author!  The author is really great, she was so good to talk about writing, along with the other author there, who I will talk about when I get her book read and reviewed, probably next month.  On her website she gives writing advice, and is very much available to talk to!  Here is her website: