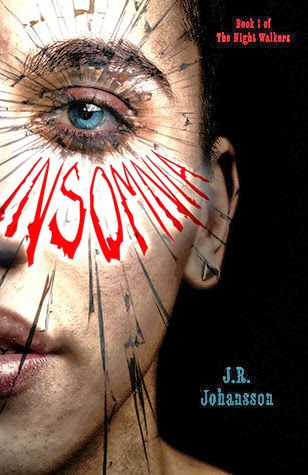 This was a book I'd been intrigued by for awhile, and then I was lucky enough to win a copy of it during the 2013 Debut Authors Bash from the Sleeps on Tables blog.  And it came personally autographed from the author along with some bookmarks, and a cool little "prescription" bottle of pills to help with the "insomnia".  The pills were my favorite candy, Skittles, so that was pretty cool.

The book started out with some really fascinating information about dreaming.  How there are different layers, and how much time you have to sleep to really dream, and about how you do need to have dream sleep in order for your mind to get the rest it needs.  I'm not saying it exactly right, but it was good.  The reason we learn about this is the main character, Parker, has this strange problem.  Whoever's eyes he looks into last for the day he will then see their dreams.  Instead of having his own dreams, he is in their dreams.  And it isn't just like he's dreaming with them, no, he's wide awake and watching their dream whether he wants to or not.  He's tried in the past to interact with them, especially when it first started when he was younger and he would be in his mom's dream and he would try to get her attention, but couldn't.  But it's getting really bad for Parker, he's exhausted.  He's even tried as a last resort to go look at someone who is working all night's eyes, so that he won't worry about them dreaming, and the best he gets from that is a void nothingness.  But it is still not real sleep.  His mom thinks he is on drugs and takes him to the doctor, who also at first thinks that could be the problem.  He even asks the doctor what happens to someone who doesn't get sleep or even dreams.  And his suspicions are confirmed.  He would soon develop hallucinations, psychosis, and then he would die.

But then there is a new girl at school, and somehow he ends up seeing her eyes last for the day.  And suddenly, here is a dream that is completely different than any he's been in before.  He knows it is different because of instead of the many layers usually there, it is just one layer.  And he is able to go and sit by a tree, and sleep.  And Parker knows he must find a way to see this girl, Mia's eyes last every day.  But this turns into a scary thing for her.  Because it seems like he's almost stalking her.  And unknown to Parker at first, Mia is getting threatening emails from someone, and so what his obsession seems like is that he is the one stalking her.  But after a week of her dreams, he is finally feeling rested.  And when he has to go without her dreams even one day, it's like all that rest he got was negated and he is right back where he was.  He finally breaks down and tells his friend Finn about it, trying to get help.  Finn ends up believing him, after hearing about some of his own dreams.

However with all the blackouts and loss of sleep Parker is having, he begins to wonder if he is the one causing the problems for Mia.  And the email address seems to be Parker's even though he doesn't remember ever sending them.  So now, he must figure out if he is innocent or if he is doing things in his sleep, and with the help of his best friend Finn, and his sister Addie, who Parker has a bit of a crush on, maybe he can do it, before he must make a dramatic decision about what to do.

A great book, I was unsure who would be the actual bad guy until the part where it is revealed, and then there is even another twist.  One that I kind of began to think about when we learned that Parker's father, who left when he was younger, also had the "headaches" and some of the issues Parker seemed to be having.
Posted by Lisa Mandina at 9:27 AM