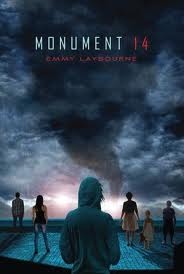 First I have to say thank you to Netgalley and Macmillan Childrens Publishing Corporation for letting me read the egalley of this book.  It really fits in with all the end of the world stories I seem to be reading lately.  It is set slightly in the future, eveyone carries a "tab" around with them for use of a phone, internet, etc.  We begin with our main character, Dean, traveling on a bus to school.  In this school district they have 2 buses for each route, one that carries the high schoolers, and one that carries the middle school and elementary kids.  They are both traveling to school when all of a sudden a freak hail storm begins.  The high school bus gets hit the worse and slides until it flips over and crashes.  The younger kids' bus driver is able to control their bus better and pulls/crashes it into the front of a huge department/grocery store, kind of like a Walmart or Target supercenter I would say.  Maybe a shopping mall?  Not quite sure.  Then she goes back and helps get the high school kids out and over into the store and out of the storm.  It's early enough in the morning that the store is empty.  Mrs. Wooly, the bus driver, leaves the kids saying she is going for help. About that time the security gates come crashing down around the store, making it impossible for the kids to leave.  So while they're waiting there, they figure they'll eat at the pizza shop.  Astrid, one of the high school girls that Dean has always had a crush on, used to work there, and so she get the pizzas going.  Their tabs aren't working, the network seems to be down, which never happens according to Dean's brother Alex, who is a tech wizard.  But they do find an old fashioned tv that they turn on to find out what is happening.  Turns out there have been lots of disasters.  A huge tsunami has wiped out most of the East coast.  And near where this is taking place, a huge government testing facility has either been attacked or something we don't know for sure, but anyway, chemicals have been released into the air.  The kids finally find a way out, on the roof of the store, but when they get up there, they see a huge mushroom cloud, the chemicals.  And then Dean turns murderous, and Niko, one of the other high schoolers, breaks out in blisters.  They learn that the chemicals have different effects based on a person's blood type.  So, they end up settling in waiting for Mrs. Wooly to return, which she doesn't.  At first they let Jake, the big football hero kind of take over as boss.  But soon other things begin to happen.  They figure out the water also contains the chemicals in the bathroom when Astrid attacks one of the little kids she is helping clean up.  Astrid then takes off on her own and hides.  Jake and his buddy Brayden just want to relax.  Aren't up much for organizing or getting things figured out so they can survive on their own.  Other problems that they must deal with, people outside trying to get in who have been affected by the chemicals.  Worrying about if the electricity will go out.  Food lasting, etc.  We've got 6 high schoolers and I think about 6 little kids plus a middle school girl.  One of the little kids speaks Spanish mostly.  Dean ends up being in charge of the food, and gets the little kids to take turns being his helpers.  Niko ends up in charge and plans things out.  Dean's brother Alex is in charge of all the power and things like that.
This was a pretty good story, an interesting take on end of the world.  In a way, a bit of Lord of the Flies, kids must learn how to take care of themselves, and when/if adults show up, they may be surprised by how the kids have had to handle things.  Definitely a good, quick read.  My only negative on it, is I don't quite know what the title has to do with the story.  I think there has to be a sequel, but not sure.  I will read on because I have to know if they do ever find their parents.
I am going to put this on my A-Z Reading Challenge as the "Y" for the two of them in the author's name.
Posted by Lisa Mandina at 12:00 AM