The Eleventh Plague by Jeff Hirsch 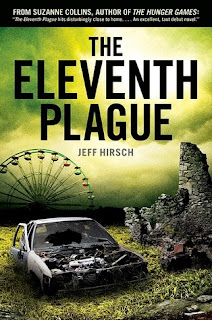 I had this sitting in my classroom since last October when our school had its bookfair and I was able to get a hard cover copy for only $8.99!  But it's like I forgot it was there.  I pulled it out about a month ago when I was doing some cleaning in my classroom, and picked it up to start reading.  It got put aside once in a while for other books, but then I decided to finish it after my last book.  While it's not quite the dystopian story exactly, it was good.  Yes, it is set in the future, and people are struggling to survive after plagues and wars have destroyed society as we know it, but really the story doesn't actually spend as much time on that as it does the relationships.  And that's okay.  This is a book about how people can work together and overcome their obstacles, and even start over.  We do get a short, but sweet update on how the world got to this point.  But more of it is about how the people have dealt with this new world.  The main character is Stephen.  He was born after the last war, and has only known life as a salvager.  They basically live on the road, looking for things to sell, in order to get what they need.  There have been plagues, and Stephen's mother dies in childbirth, and so he's spent a lot of his life with just his father, and his grandfather.  And his grandfather was not a nice guy.  But we don't really get to spend time with him, as we begin the book with Stephen and his father burying him.  As they try to figure out just what they want to do now they're not having to follow the grandfather's orders, Stephen's father gets hurt.  And while Stephen is trying to figure out what he'll do and how he'll go without his father's help, a band of people find him, and take him and his father back to their community called Settler's Landing.  In Settler's Landing they are trying to get back to "normal".  Living in houses, farming, going to school, playing baseball.  But things aren't exactly perfect there either.  You've got the rich family that is in charge, and then you have other settlements that they often fight with, the slave traders, and other people in town, like Jenny.  Jenny is Chinese, the country that was part of the big war against America.  She was adopted by one of the families, the one that takes Stephen in, but she's never quite felt part of the community.  And her rebelliousness actually draws Stephen in, and they have a kind of connection.
The relationships in this book were written very well, and I feel pretty realistically.  I can see this as a big book with my students, I now just have to get them turned onto it next school year!
This also is my 10th book on my TBR pile, so it completes my goal for the TBR Pile Reading challenge.  Guess I'll keep going and see how far I can get this year on this challenge.
Posted by Lisa Mandina at 4:00 PM