The Red Necklace by Sally Gardner 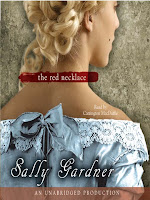 I picked this up as a stripped copy at work a week or two ago. Recently, or ever since the movie The Other Boleyn Girl, I've began enjoying more historical fiction. This book is set in the time of Marie Antoinette and the French Revolution. It's about a boy who is a gypsy and his friend/mentor a fellow gypsy who is a dwarf. They work with a magician whose biggest trick is that a bullet is shot at him and he catches it. They are called to a wealthy man's house to perform for his guests, and this time, the bullet hits its mark. Well, the person holding the gun is Count Kalliovski, who knows the magician, and Tetu the dwarf from an event he'd like to bury. Tetu knows Yann must get away before Kalliovski finds him. In their hiding and trying to escape, they end up being helped by Sido, the daughter of the Marquis de Villeduval. Sido is not treated well by her father. And turns out that Kalliovski wants to marry her.

Count Kalliovski is not what he seems, and so Tetu gets Yann away, but not before he is wounded, maybe killed. He sends Yann to a friend in London to raise him and turn him into a young gentleman. The family he goes to live with is actually related to Sido, and Yann gets a chance to go back and try to help her.

It leaves on a cliffhanger, and I was worried it would just end like that, but no, there is a portion of a sequel at the end, so I'll be waiting for that to come out to read as well. A good historical fiction book for kids.
Posted by Lisa Mandina at 2:04 PM